"The food industry has used genetically engineered bacteria and yeasts for more than 20 years to produce vitamins and nutritional supplements."

-- Agricultural Biotechnology, The University of California

People are actually ingesting rotten vegetable matter that is produced with biotechnology assistance, for health benefits.  Of course, the companies have not studied whether this fermentation process produces toxic byproducts, as most fermentation does, because the priority is profit.  Such studies would actually make them more liable, because until they have evidence that demonstrates harm, they can simply claim ignorance.  The few food-based multi-vitamin products which did not contain yeast had other questionable ingredients, such as oyster extract, various algae, and seaweeds.  These items should never be considered foods, and especially not health foods. The real foods in the "food based" supplements have been replaced with non-food bottom feeders from the oceans, and pond scum, which are known for a huge variety of toxins. Some of these vitamins will prove deadly for people with shellfish allergies, and the cause of death will never be traced to the vitamins.

We must reverse our prior recommendations about supplements, and we are now recommending synthetic vitamins instead.  In the past few years, a lot has changed in manufacture, and it is obvious that the biotechnology industry has made in-roads into supplement manufacture.  We previously recommended food-based multi-vitamins on the basis that synthetic vitamins are much harder for the body to absorb, and there is a chance of simply causing stressed kidneys when using high quantities of them.  However, there is no good choice for supplementation anymore, so it has become a matter of choosing the lesser of evils.  The current situation is that if one does not use the vitamins from the chemical industry, then he must instead use the "food" vitamins from the biotechnology industry, which are considerably worse.  While we hope and expect that this will one day change, this is the current deplorable situation.

The fact that we are reversing our position should help to explain why we are usually so careful not to make specific supplement recommendations.   Any recommendations that we make can become invalid weeks or months after making them, and hundreds of thousands of people could have read and acted upon those recommendations.

The most important long-lasting recommendation is to read the ingredient labels, and learn to spot the dangerous ingredients.  The following is a list of common vitamin ingredients that should always be avoided: 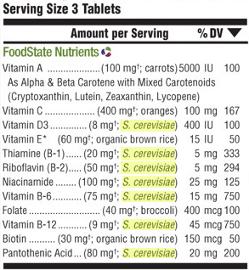 Brewer's yeast and so-called nutritional yeast feed candida, which is the bacteria in the gastro-intestinal tract that is responsible for allergies, frequent headaches and mood swings. When there is an excess of candida, the body becomes unable to properly absorb nutrients from foods. So, there is an incredible irony when yeasts are added to supplements, only to prevent proper nutrient absorption. We discussed nutritional yeast in episode 26 of our audio reports.

We cannot recommend multi-vitamins, which seems to be the worst category. A good dietary supplement should provide a nutrient that heals a known condition, or corrects a likely imbalance, but multi-vitamins provide a shotgun approach to supplementation that has become increasingly dangerous. This is especially true now that most companies are getting ingredients from China. For what you do not know can kill you, slowly and horribly. Whenever a person takes a vitamin, he is making a gamble that the vitamin will help him more than it impairs him.  Multi-vitamins pose an irrational level of elevated risk, for minimal convenience. With multi-vitamins, it is especially hard to find a company that is willing to trace where it obtained every ingredient, and whether it was from a disreputable country that has a history of poisoning us, such as China.  The risk of multi-vitamin contamination is much higher than for regular supplements.

People who want (or need) to get extra nutrients daily can achieve that by using hemp protein powder as a natural source for all of the amino acids and dietary fiber. Another option is to mix fruits and vegetables together in a blender to make juices. Such natural approaches do not come with the same level of risk as unnaturally extracted nutrients, and the purely organic nutrients work much better.

Vitamin B-12 is necessary for good cognitive function, and mental alertness.  It can only be found naturally in meats, so it is always lacking in vegetarian and vegan diets, but it is sometimes lacking even in those with fairly balanced diets.  Cyanocobalamin is the most common type of vitamin B-12 added to supplements, but it is very poorly absorbed.  Its manufacturing process is cheaper, so it is preferred by the less-ethical supplement manufacturers, which are most of them.  Methylcobalamin is much better absorbed, and its absorption is improved if it is held in the mouth and allowed to dissolve into the mouth tissues, instead of through normal digestion.  Most of the ethical companies that sell methylcobalamin B-12 supplements provide them in a lozenge form for maximum absorption, which we likewise encourage.

The best vitamins are always those from foods as God made them.  There is no pill substitute for a good diet.  Supplements are able to somewhat "supplement" a diet that is lacking in a specific nutrient, but they will never be able to replace good nutrition.  The reality is: No one has been able to identify all of the nutrients that are in our foods, so any attempt to replace a good diet with supplements is both futile and foolish.  The people who choose to eat processed foods and then take supplements to compensate are likewise on a fool's errand, because their overall gastrointestinal health is typically too impaired to properly absorb and utilize the nutrients from the supplements.

When attempting to improve the diet, be aware that organic foods have a higher density of nutrients.  In addition, they do not contain pesticides that weaken the immune system, cause diseases, and make it more difficult for the body to absorb nutrients. Organic foods are not 'enhanced' by the biotechnology industry either.

Evaluating The Evaluators from Consumer Labs

Basic Tips For Being Healthy