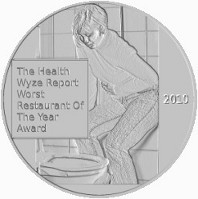 Most people give Subway the benefit of the doubt concerning their food items; assuming that they do the best that they can to provide healthy alternatives.  However, the Subway ingredients list shows that even the most basic food items available at Subway are toxic.  We have archived a copy of the Subway ingredients list, in case it disappears. We are going to briefly examine three basic food items that are used by Subway.  There are much worse examples, and this is merely a demonstration of products that could have easily been acquired naturally.

Even the bread at Subway is toxic.  Instead of using olive, sunflower, or peanut oil, they chose to use soybean oil.  They could have claimed ignorance if they had used canola oil, but the dangers of soy have been known for decades.  Soy is always toxic, typically genetically engineered, and it is the primary reason why health-destroying hormone problems are so prevalent in America.  The hysteria surrounding soy as a health food ended long ago.  It is used because it is cheap, not safe.

Azodicarbonamide is showing up in restaurant breads more and more, yet it is banned in the United Kingdom, throughout Europe, and in Australia.  It was banned for causing respiratory problems, such as asthma.  The material safety data sheet (MSDS) for azodicarbonamide warns of irritation of the digestive tract, skin irritation, allergic respiratory reactions, and the need for special protective clothing and gloves for those who come into contact with it.  Industrially, it is used to make foam plastics, but so far, we have been unable to discover the rationale for using it to poison bread.  Perhaps it helps the chemical industry to dispose of its wastes.

Subway also adds mineral oil to its breads, as if Americans simply did not get enough petroleum in their diets.

Soy is present even in their basic chicken breasts, along with autolyzed yeast extract, which is almost certainly hidden monosodium glutamate.  They also add more sodium in the form of table salt repeatedly, even while marketing to people who could have risky heart and blood pressure conditions.  Natural sea salt would provide minerals to help prevent heart disease, but processed sodium severely aggravates such conditions.  Toxic sodium is excessively used in all processed foods, but people assume that the "fresh" foods of Subway are not tainted in the same way.  The modified food starch is a mystery ingredient, as we have reported before.  It can be "modified" in a variety of disgusting ways; often having genetically engineered bacteria inside it -- the kind of bacteria that you could find in a place that has nauseatingly-poor hygiene.  The executives of Subway consider it good enough for your family to eat.

It should surely be called false advertising when their "Eat Fresh" commercials are actually advertising vegetables that will last for years without deteriorating.  They are practically embalmed.  Take for example, the lettuce, which is supposedly pure, but never seems to turn brown.  Sodium benzoate is not just a preservative, but it is also a mutagen that turns off a vital part of the DNA, causes allergies, reduces the I.Q., and provokes A.D.H.D. symptoms.  It is present in some major brand soft drinks, and we strongly recommend a complete avoidance of it.

To ensure that peppers do not change color during months (or years) of storage, Subway's peppers contain petroleum in the form of yellow #5.  Artificial dyes, which include infamous yellow #5 have been shown to be neurotoxic from the behavioral problems that they are known to cause.  As a result, they are being phased out of British products (before they are outright banned).  Of course, these dyes will continue to be fed to Americans with the full blessing of the F.D.A..

According to the material safety data sheet, Polysorbate 80 has been linked to cancer, alters DNA, and damages the reproductive systems of test animals.  It is worth noting that this is present in several vaccines, including the recent swine flu and Gardasil vaccines.

Subway won our Worst Restaurant of The Year award because unlike other fast food restaurants, they repeatedly try to appeal to those who care about their health.  People place their trust in their deceptive marketing campaigns, and are subsequently poisoned.  During the research phase of this article, we called the Subway Headquarters to ask about their use of genetically engineered foods.  We were told that the information "would not be available", which really is an answer.  We feel that it spells out their agenda concerning genetically engineered foods quite clearly.

The bottom line is that Subway seems to have no interest in making Americans healthier whatsoever, but it is instead taking advantage of those who are trying to improve their health.  We strongly recommend boycotting this restaurant chain.

UPDATE: We finally received the response shown below from Subway corporate after finishing this article.  Notice that they do not fully "indorse" G.E. foods.  They only partially endorse genetically engineered foods.  Isn't that fresh?

How MSG (Monosodium Glutamate) is Hidden in Your Foods and its Antidote, Taurine