According to the U.S. Environmental Protection Agency, the following emergency procedure should be followed in the event of a bulb breakage, due to the poison gas that is released. 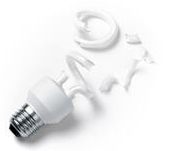 A new radiation threat is upon us all. In lieu of this, we begin by emphasizing the "radio" and "radiant" links to the word radiation. They ultimately are descriptions of the same phenomena: radiant energy in the form of electromagnetic waves of pulsating energy. So, how does the energy actually radiate itself outward? The truth is, we do not really understand that part. Physicists have pulled their hair out for decades over that question. What we do know is that when things vibrate at a nuclear level or have electrical current changes, then these changes of state -- these frequencies -- cause energy to be radiated outward at the same frequencies. This is how radio transmissions work. Radio transmissions merely mix the audio (voice) signal with a fixed frequency that listening radios are "tuned" to, and viola! Or as my past electronics teachers would have said, in their fancy engineering terms: "It will have imparted intelligence upon the carrier wave". A good analogy of how frequencies operate is remembering the ripples from a time when you dropped a pebble into a small creek or pond. You may recall that the ripples were reflected from the banks at exactly the same rate and distance as the original waves that struck them. The whole point of this is to make clear that the very basis of radiant energy transmissions and all types of radiation on the entire electromagnetic spectrum boil down to one thing: frequencies. Frequencies determine how far the energy travels, how well it penetrates, and how it effects things. The ultra high frequencies of gamma (i.e. nuclear) radiation can quickly destroy a person through burns, cancer, or otherwise; while the low 60 Hz. of standard American power has little effect in typical exposure. Frequency determines if the energy is radio, microwave, infrared light, visible light, x-rays, gamma, or ultraviolet. There is real power in frequencies. As a general rule, the higher the frequency, the more dangerous the energy is. Nuclear radiation is at mindbogglingly high frequencies.

For years, we have heard about how energy-wasting incandescent bulbs are bad for the environment. This made way for a whole new industry of "green" bulbs, marketed to the growing population of people who seek to address environmental concerns. However, these bulbs compromise people's health, and they are ultimately much more harmful to the environment.

There are lots of speculations regarding how these bulbs can cause these effects. Very little research has been done. Despite this, European countries are phasing out incandescent bulbs, and forcing the public to switch to the "energy efficient" alternative.

The new light bulbs emit two forms of radiation outside of the visible light spectrum: ultraviolet and radio frequency. The F.D.A. states that in addition to visible light, these bulbs also emit UVB, and infrared radiation; but let us not forget the radio transmissions. These bulbs are reported to have a flicker rate of 100-120 cycles per second, which seems low considering the UVB light that these bulbs produce, and of course, radio transmissions. In any case, even a flicker rate as low as 100 hertz is more than enough to trigger severe epileptic seizures. Video games are well known to do the same at a mere 60 Hz. Judging from the multiple bands of radiation released, the flicker rate can be expected to be well beyond 120 hertz (including the light that we cannot actually see), so just start adding zeros to get the point about how likely they are to trigger epileptic seizures. These bulbs have negative effects on people with lupus too, which is something that has baffled everyone so far. They are also known to damage the skin, and thus they must emit high-frequency radiation. Watchdog organizations in the U.K. are clamoring about the issues mentioned above, and the fact that these bulbs also aggravate eczema and porphyria.

We have been doing this work long enough to spot the pattern. The radiation from these bulbs directly attacks the immune system, and furthermore damages the skin tissues enough to prevent the proper formation of vitamin D-3. This will cause major cholesterol problems in time, and cripple the liver by preventing it from converting the cholesterol reserves inside the skin tissues (vitamin D-2) into usable vitamin D-3. This has the potential to cause or aggravate, not dozens, but hundreds of disease states. All that they had to do was shift the frequencies of otherwise benign light bulbs, and suddenly we have this mess. It is as if the whole mess with fluorescent light bulbs gave somebody inspiration for how to radiation poison us, while tricking us into begging for it.

One of my first lessons while studying electronics was that energy efficiency is effected more by heat than any other factor. That is why superconductors are always super cooled, and why your oven uses about 60 times more power than your television. Heat equals wasted power. It is written in stone. Amazingly, standard light bulbs manage to be extremely energy efficient, despite the heat that they produce, and despite the fact that their light comes from heated elements. In fact, they manage to waste less than 10% of the power applied. This is because the heat resists the current flow in the wire coil -- to the point of practically cutting off the current. You see, heat also increases resistance. This breaking effect upon a bulb's current gives standard incandescent light bulbs their overall high efficiency.

My first engineering project was testing light bulbs with high-end testing equipment, to study this rare property. I remember our teacher gleefully laughing at us as we sat befuddled by the fact that all of our calculations for power usage contradicted the measurements. The exercise was meant to be a memorable lesson about how heat may dissipate (or conserve) power in such a way that electrical devices appear to bend the rules of physics. An important lesson was that while theoretically incandescent light bulbs ought to be wasteful of energy, they actually increase their own resistance via heat to the point that very little of their energy is wasted. Take for example how long a standard flashlight will produce bright light with one or two small batteries. On the other hand, just try to power an oven with those same batteries for an exercise in frustration.

It shows the breadth of the deception to note that the new generation of bulbs is supposedly designed to save us from a problem that does not actually exist -- inefficient conventional bulbs. The new bulbs, as you may have already noticed, do not produce any noticeable amount of heat. This is because the light from the new generation of bulbs is produced by injecting pulsating electricity (having a frequency) into a chemical gas to radiate light, as in pure radiation. By the types of radiation that the new bulbs emit, they must operate at frequencies astronomically higher than the 120 hertz that they are said to, so somebody is certainly lying about them. Technically, there is no reason for high frequencies to be used. If a lower frequency produces the needed visible light, then why do these bulbs operate at unnecessary higher frequency bands too? These extra frequencies simply could not have been stepped up and oscillated (frequency generated) higher by accident, regardless of whether the oscillation is chemical or electronic. Doing such a thing can make even an experienced engineer's head spin, due to the overall technical difficulties in frequency tuning; especially on the higher end. Furthermore, are we expected to believe that none of the companies or regulators involved ever bothered to test these new light bulbs with an oscilloscope during the testing? It is absolutely ludicrous to believe that they do not know. Thus, the only explanation is that these bulbs produce harmful radiation by design. They are designed to produce radiation outside of the range of visible light that is known to be harmful to humans, and it is all justified to solve an environmental problem that does not even exist.

The proof is already before you to observe at your leisure -- how these lights interfere with radios, cordless phones, and R.F. remote controls.

It Gets Even Worse

This may be showing my age to some, but I had never heard of "dirty electricity" when I was in college. For those of you with some electronics training, it is similar to the topic of harmonics, but the rest of you need not worry about this point. Here is the quick and dirty about dirty electricity. The new age bulbs do not just directly radiate radiation from themselves, which alone would be reason for infamy. Believe it or not, these bulbs actually inject frequencies back into a building's electrical supply lines. Thus, the building's normal electricity (at 60 Hertz) has been made "dirty" (contaminated with other frequencies). This means that every wire in the building is also emitting radiation, like a spider web of antennas.

Dr. Magda Havas, of Trent University, cataloged the frequency ranges for both the radiation coming from the bulbs, and the dirty electricity radiation that pulses throughout entire buildings. She is credited for creating the following charts. 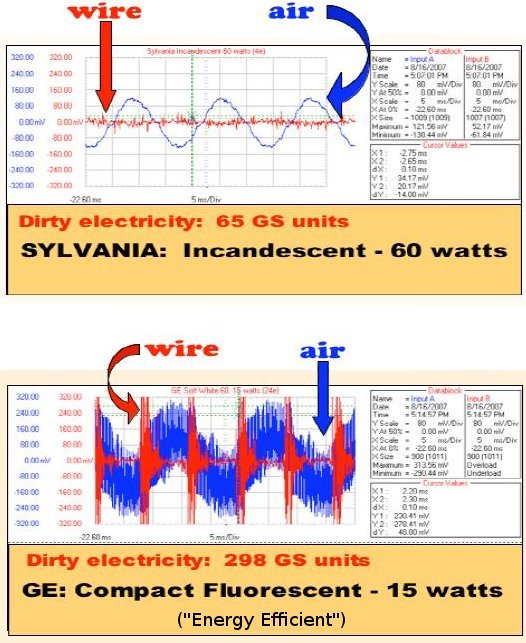 "The energy efficient compact fluorescent lights that are commercial available generate radio frequency radiation and ultraviolet radiation, they contain mercury - a known neurotoxin, and they are making some people ill. Instead of promoting these light bulbs governments around the world should be insisting that manufactures produces light bulbs that are electromagnetically clean and contain no toxic chemicals. Some of these are already available (CLED) but are too expensive for regular use. With a growing number of people developing electrohypersensitivity we have a serious emerging and newly identified health risk that is likely to get worse until regulations restricting our exposure to electromagnetic pollutants are enforced. Since everyone uses light bulbs and since the incandescent light bulbs are being phased out this is an area that requires immediate attention."

It is ironic that people buy these bulbs to help the environment, because the bulbs will leak mercury and emit mercury vapors when they break. They are so toxic that we not supposed to put them in the regular garbage. They are literally household hazardous waste. If you break one in a house, you are supposed to open all of your windows and doors, and evacuate the house for at least 15 minutes to minimize your exposure to the poisonous gas.

We recommend using either incandescent or L.E.D. bulbs. L.E.D.'s use less power, produce a more natural (and relaxing) light that is less yellow, do not burn out, are not toxic, do not produce harmful radiation, and they operate at a cool temperature, so that there is never a fire or burn risk. L.E.D. bulbs are simply a superior technology in every way.

More Radiation Poisoning Coming Soon to a Hospital Near You