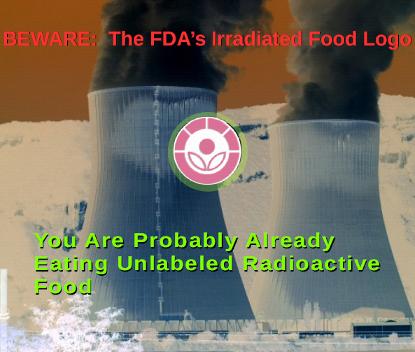 Radiation is being used to enhance some of the foods that are being shipped to retail locations throughout the United States as you read this. This report explains the situation, politics, history, and what is being presented by profiteers as the 'science' of food irradiation.  As expected, quite a bit of deception is being used to trick the public into consuming these foods without its consent, for everyone knows that public consent will never happen.

One half-truth being used in the deception is that all irradiated (radioactive) foods must be clearly labeled as such.  While this may be superficially true, if individual ingredients comprising a food are irradiated, instead of just the final product, then no labeling is required.  You can safely bet that the final products are never labeled.

One outright lie is that irradiated foods do not remain radioactive, and this lie violates the laws of physics.  Once something is made radioactive, or is exposed to high radiation, it remains radioactive for a considerable time afterward.  Radioactive items may also make other things in contact with them radioactive as well.  This ‘contagious’ property of radiation is one of the things that makes it so dangerous, and it is why people in many countries who are undergoing radiation treatments are told to avoid contact with children.  In the studies we saw, the radioactivity of foods declined by only 45% after 10 days.  Make note that the typical level of radiation being used is 200,000,000 times that of an X-ray, so even after 10 days, the residual radioactivity would still be that of something exposed to over 100,000,000 X-rays.

The Status Quo of Food Safety 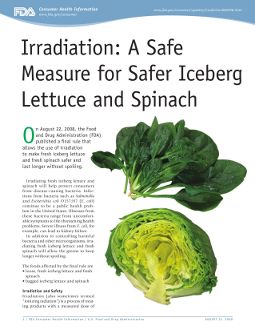 You can bet this will disappear from the F.D.A.'s site, if it hasn't already. Click to enlarge.

There are about 325,000 hospitalizations each year due to food poisonings, and the numbers appear to be getting worse annually.  Our foods are laced with preservatives and other additives which are supposed to ensure that they do not “go bad” before consumption, yet we still get sick.  Food poisoning is not at all limited to restaurant food.  There are thousands of reports of food poisoning from dried and processed frozen foods.  There have always been food poisoning reports about the meats sold in grocery stores, and there were recent scares over peanuts and tomatoes.  Organic growers, and health advocates have noted that food poisonings are usually due to poor hygiene in the slaughter and packing houses, along with laxity in the cleaning of crops; so reducing the number of food poisoning cases would be a easy task, if an honest effort was made.  Unfortunately, it could also be an expensive one.  It would mean that processing plants would follow legislation that is already in place, and that action would be taken whenever the U.S.D.A. inspectors notice hygiene problems.  It would be a big change from the status quo.

In the biggest recall of 2002, one woman died and at least 46 people were sickened from e. coli found in ground beef from a ConAgra plant in Greeley, Colorado.  The Agriculture Department’s Inspector General disclosed that the plant had been cited 66 times for fecal contamination from January 2001 until it was temporarily closed in November of 2002.

“Most systems will work and protect the consumer if you’ve got two things: teeth and enforcement. But in many plants the safety plans are still just smoke and mirrors.”

They Create The Problem, and Then Offer "The Solution" That They Wanted All Along

Instead of dealing with the causes of the problems, the establishment is responding in its typical fashion; by attempting to treat only the symptoms.  High-ranking members of the F.D.A. are now proclaiming that the epidemic of infected foods provides proof that our foods need radiation to be safe -- never mind this was never before necessary in the previous 9,000 years of food history.  Radiation has been approved for most fruits, vegetables, and meats.  In many cases, radiation-tainted foods can be sold without labeling.  A warning label would reduce the profits, because informed citizens would rarely purchase irradiated foods with full disclosure; and they know it.  The hostile reaction from Europeans has caused the new U.S. food irradiation industry to proceed in a cloaked manner.

"There's a whole impact on the product, which we think is an unacceptable cost... People that did the shopping -- they would look at the date and be freaked out at how long it would be good for.”