"Liberty is to the collective body, what health is to every individual body. Without health, no pleasure can be tasted by man. Without liberty, no happiness can be enjoyed by society."

Wyze is our alternative spelling of the word wise, for spreading wisdom is at the core of our work. Wisdom reliably proceeds the appreciation and understanding of liberty, and this is why Christianity is always so closely linked to nations which have human rights and basic freedoms.

The Health Wyze Report is primarily our online encyclopedia of alternative health information, and it forms the foundation upon which all of our other media has been built. It is not a blog, nor is it truly a business. Its parent, Health Wyze Media, is a non-profit, educational organization.

Anyone who studies our work and visits this page will be seeking to categorize us, and to affix an appropriate label onto us. We are most appropriately called truth seekers and whistleblowers. We once referred to ourselves as investigative journalists, but we seldom do that anymore, because of the unseemly reputation that journalists have earned for themselves, for most modern 'journalism' consists of misinformation and disinformation. Some people have called us the health detectives.

Thoughout most of our medical investigations, we liberally exposed the important traditional therapies which worked better and more safely. These methodologies were employed by doctors everywhere prior to the hijacking of medicine worldwide by the American Medical Association, which occurred in the early part of the 20th Century. The modern medical cartel has likewise hijacked the entire medical vernacular, including the word "conventional", when in fact, the medicine that we preach, practice, and uncover has been the conventional and traditional medicine throughout most of human history. Their allopathic chemicals are definitely not conventional. They are experimental.

The Christ once demonstrated that if one wishes to meaningfully impact the world, then the first steps toward that goal are healing the sick and saving the dying. What now purports to be medicine in this modern era consists of deceptive and poisonous tools that are used to enslave entire populations, by making the citizens believe that they are utterly dependent upon an elite set of chemical companies for their very survival. Our reporting has proven that knowledge really is power, and that the truth can set us free. Faith is always a huge component of our work, because a person must first believe that he can actually experience freedom before he is able to free himself. Our mission is to provide the knowledge that is more precious than anything else on Earth.

Our History and Our Principles

We formerly produced Naturally Good Magazine, but the powers-that-be were able to silence our magazine. We are now the producers of The Health Wyze Report. All of our efforts go into our Internet presence, audio shows, and documentaries. We also compiled and reorganized our best reports into the book, Defy Your Doctor and Be Healed, in 2013.

Health Wyze Media is the only organization that is willing to take a critical look at the problems of both allopathic medicine and alternative medicine. There are other sites with alternative health information, but their information is not well researched in the best of cases, and it is thoroughly dishonest in the worst cases. No other group does exactly what we do, or do it as well. It is the type of investigative journalism that your grandfather once knew.

We are never politically correct. We are willing to chastise the multitude of frauds, regardless of whether they come from the mainstream or from alternative medicine. We have no qualms about berating how cholesterol drugs actually cause heart disease or exposing how chemotherapy worsens cancer; nor do we shirk from exposing the alternative frauds of energy healing, urine therapy, and homeopathy. We have a virtual monopoly on health and medical truth, because everyone else is too busy with politics to be truthful.

Born in England, Sarah lost her mother at a very young age, and defaulted to living with two relatives who were corrupt police officers. She quickly learned from her abusive foster parents that authority should be questioned, and that those who seek occupations of power often do so because they have abusive tendencies.

As a child prodigy, Sarah ventured into politics at an early age to fight against society's monsters; giving her first national political speech to thousands at the age of 12, and received a standing ovation. She continued on that path for several years, embracing the naïve belief that politics could be used to save people. She would later realize that embracing a broken system of power is no way to save a country that did not wish to be saved. The people of her native England had lost their faith in God long ago, and of course, the country has been in a hopeless tailspin since then. She came to grieve the realization that Britain could barely be considered a 1st World nation anymore, as a result of its denial of God and embrace of 'Allah'.

At the age of 16, Sarah escaped to the United States of America from her increasingly aggressive, abusive father, and violent attackers from leftist political parties. She began using her past experiences to help others by giving speeches at a local high school on the topics of domestic violence and child abuse. After writing an article about the corruption within the local school system, she was told not to return to the school in the future, and was subsequently blacklisted from even volunteering to help violence victims. These blatant civil rights violations and abuses of power did little to help Sarah overcome her distrust of typical authorities, and the gross corruption did little to encourage her to believe that America was still a free country. She has managed to help a huge number of people, despite the attempts of corrupt politicians to silence her in both countries. She has written a detailed book about her personal trials that she will publish whenever the time is right.

Because of a horrible lifestyle during most of her early life, Sarah began experiencing pre-diabetes soon after her arrival in America, and it was then that she gained an interest in alternative medicines. She cured herself in a matter of months, without any medical intervention from the allopathic establishment. Since then, she has spent an extraordinary amount of time writing and researching about health topics, most of which can be found on this website.

Sarah is absolutely machine-like regarding her research skills. She has the uncanny ability to reliably find the important but obscured facts that no one else is able to find. Her super-human ability to mentally process entire libraries of information rapidly makes her the real brain of the organization.

Currently, Sarah is producing an ongoing video series as a conservative political commentator. For more information about Sarah and her video series, visit SarahCorriher.com. 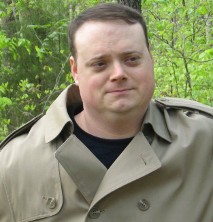 The first major thing to redefine Thomas was attending a military academy during his high-school years. That environment fostered much of what he would become as an adult; and while he fiercely hated the spartan lifestyle, he is nonetheless grateful for having been given an elite education. Military school is where Thomas developed his life-long love of the martial arts and his disdain for illegitimate or abusive authorities. He had been labeled by the public schools as a "bad" child, due to his creativity and leadership abilities, so he was given the chemical straight-jacket of Ritalin for years. This was when A.D.D. was first being explosively "discovered" in the 1980's to save lagging Ritalin sales.

Thomas later studied Justice and Public Policy at a supposedly well-respected college, but he is too ashamed of its ungodly and treasonous indoctrination to ever mention it by name. He firmly believes that education is supposed to free the mind, instead of controlling minds for despicable agendas, such as the politics of promoting communism. His having learned the nature of modern education at all levels is the reason why he now educates his own child at home. His justice studies were meant to help him to become a better State Trooper. In the naïvety of his youth, Thomas wanted to be a cop; because he wanted to save the world from all the evildoers. You may notice from some of his writings that this urge never completely left him.

Eventually, Thomas realized that law-enforcement was not going to permit him to do much good, and that it might actually mean becoming a part of the problems. Thus, he abandoned that path to return to his family's business for a while, which was a commercial (non-residential) construction company. He did it for a few years.

Thomas returned to school to study Electronics Engineering at an I.E.E.E. certified college. This was the first time that an educational program had allowed him enough freedom, and the engineering program challenged him enough intellectually for him to enjoy school for the first time. He loved almost everything about it, except for the advanced math courses. He believes that certain types of mathematics should be reserved only for torturing the worst prisoners.

After engineering school, Thomas moved to Charlotte, N.C. to become a computer networks field technician and satellite communications technician. While there, he worked for every big technology company imaginable and traveled vastly; but more importantly, his wife conceived their son.

Thomas abandoned the high pressure and unstable world of high-technology consulting for Health Wyze, and returned to his hometown. He still has a love for technology, and a particular fondness for the freedom and power that is granted by Linux-based software. He obviously retains a geeky streak in his personality, and he can fix almost anything; unless the problem is mechanical. Thomas was inspired to form Health Wyze Media by Sarah's research and her repeated curing of the 'incurable'. He has dedicated his life to this enterprise.