Why Everyone Has Attention Deficit Disorder, and Why it is Illegal To Cure 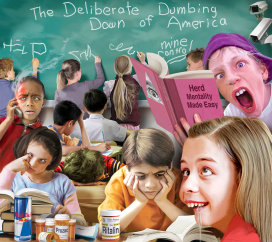 There are a lot of people in modern society who have trouble concentrating on seemingly simple tasks. There is an emerging epidemic of people who are having difficulties with organization, memory, and they have a tendency to become easily distracted. It is sometimes blamed on an increased need to multi-task in the workplace or school. However, the workload for most Americans has not actually increased at the same rate as these problems have, and people with low-stress jobs are experiencing these same issues at equally-elevated rates.

A June 2009 C.N.N. article titled, Why Can't I Concentrate? blamed A.D.D. as the cause of these problems, pointing to the fact that 5 million female Americans suffer from it, and it is even more common in men. The media ignored the most basic probing questions such as, what is the cause and the cure? Perhaps they were silent on these questions because any mention of curing would have meant that the reporters were risking criminal prosecution for making unapproved medical claims or practicing medicine without a license. Even though they should be immune from such worries as journalists, we can nevertheless imagine the cold chill as they conferenced about this matter with their legal department beforehand.

The truth is that A.D.D. is usually an easily correctable condition, for which there exists no conclusive diagnostic testing. It is simply a diagnosis that is based on a collection of symptoms that naturally occur to lesser degrees within healthy people. The newer and more expensive drugs that are available at the time of diagnosis largely define the treatment strategy. Attention deficit disorder is similar to the case of restless leg syndrome, for which a new disease had to be created (by vote) to sell a pharmaceutical that had no known benefit. They call it "science". The final diagnosis can be A.D.H.D., bipolar disorder, or a whole list of other conditions that are coincidentally appearing at the same rate as the new pharmaceuticals to treat them. The most comical of the new psychiatric disorders is oppositional defiant disorder, whose primary symptom is being a child who dislikes punishment. It is reported to be rampant.

The Causes of Attention Deficit Disorder

A.D.D. can be caused by chemical poisoning this is combined with malnutrition in childhood. Therefore, A.D.D. is often diagnosed soon after vaccinations (just like autism), because vaccines are known to induce vitamin deficiencies. For more information about this, reference our article about Sudden Infant Death Syndrome. The condition may also slowly develop for people who have poor diets. A.D.D. appears to be a genetic disorder, for poor diet habits and family doctors are cross-generational. While most people do not have A.D.D., they nevertheless experience at least some of its symptoms routinely, due to horrible lifestyles and health. 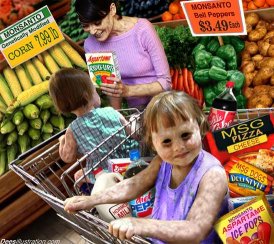 Children are more likely to get diagnosed, because the foods which are marketed to them are often brightly colored with chemicals, full of artificial flavors, have huge amounts of acids, refined sugars, and artificial sweeteners that greatly exaggerate their symptoms. Artificial colors and several additives have been removed from children's foods in England, due to their well-documented toxicity problems, while in the U.S., the F.D.A. is running interference to keep the chemical companies protected.

Most sources ignore one of the most insidious dangers of poisons. This danger is that they equally attack the brain. Mercury causes autism. Lead causes retardation. MSG lowers the I.Q. and may even cause heart failure. Aspartame causes epilepsy, Parkinson's disease, multiple sclerosis and brain cancer. Most artificial food additives aggravate A.D.D. You will find a plethora of evidence proving these statements if you look to sources outside of the U.S.A. Research is discouraged in the Americas, where the chemical industry is well protected.

A prime cause for the initial onset of attention deficit disorders are very severe illnesses that occurred during childhood, such as pneumonias. Life-threatening illnesses at a young age often have a lifetime impact; and such events may hyper-stimulate the immune system, so that it forever overreacts to even the most minor threats. People who are thus afflicted are significantly more vulnerable to chemical toxicity and allergens than average people. In these cases, a patient's cognitive instability stems from his hysterically overdriven immune system, which was trained to react violently to even the most minor of threats. This is exactly what attention deficit disorder is. It is a body that cannot believe that it is well.

The cure for this relatively new disorder requires major changes in diet. Sufferers need to reduce (hopefully eliminate) their overall exposure to toxins; like pharmaceuticals, hand sanitizers, corn-fed meat with nitrate salts and synthetic growth hormones, refined sugars, and other bleached white products, artificial colors, artificial flavors, the so-called "natural flavors" that are usually unnatural, artificial fats such as margarine, and even tap water. Getting healthy oils and avoiding damaging fats is particularly important for those with attention deficit disorder symptoms. Soy, canola, and all hydrogenated oils should be avoided. Real butter is a healthy addition to the diet, as is coconut oil and olive oil. Using the Budwig Protocol's mixture of flax seed oil and unhomogenized cheese is likely to have a dramatic effect upon the concentration, and it will eliminate some of the allergen sensitivities.

Beware of the new generation of drugs, especially the S.S.R.I. anti-depressants, which typically require that a user slowly be weaned from them. This is extremely revealing about the intentions of the industry, which is legally allowed to create drug addictions at will. The treatment drugs, at best, only suppress some of the A.D.D. symptoms for a short period, before it is time to upgrade to a stronger dose, or to a stronger drug. This is the intent. The effects of the drugs are disastrous; like homicidal violence, and the drugs frequently induce fantasies about violent suicides too. Every school massacre in U.S. history had these drugs involved; to put the danger into perspective. The drugs cause the suicide rate to skyrocket from an emotional effect that the pharmaceutical industry callously calls "suicidality".

Some people who exhibit A.D.D. symptoms are introverted, and they actually do better when given more tasks to work with; not because they are diseased, but because they are of a higher intelligence; and therefore, they require more stimulation. The down-side is that they also suffer with increased sensitivity to toxins and unnatural foods. There is a poorly-understood link between attention deficit disorder and high intelligence, so the druggings are actually the pacification of our future leaders.

It really is this simple: detoxify yourself, stop feeding your body poisons, and stop allowing others to poison you. A.D.D. can be transformed into a gift, instead of a disease. There is absolutely nothing wrong with being creative, being a leader, or having individuality. In the not-so-distant past, society rewarded these qualities.

Changing the diet to an all-natural one (preferably organic) will provide enormous assistance for A.D.D. people, without the need for drugs; and it will furthermore greatly help with the patient's overall long-term health.

There are supplements that can help to reduce A.D.D. symptoms. However, these should only be used in combination with the proposed dietary changes. White vein kratom is a herb that helps with concentration, energy, and motivation. It could be considered a natural version of Ritalin. We recommend purchasing kratom from Buy Kratom Bulk USA. Kava kava might also be helpful, because it helps to prevent seizures. Note that attention deficit disorder is in part a seizure disorder, but this has been whitewashed by the psychiatric establishment throughout the last decade. To learn more about these herbs, read the article, The Potent and Natural Painkillers That Are Still Legal. The following supplements may also prove helpful: gotu kola, ginkgo biloba, guarana, L-tyrosine. Be aware that L-tyrosine makes some individuals drowsy.

Why can't I concentrate?, CNN

# How? — NIkki Figueroa 2013-05-03 13:50
IM wondering how your website has not been shut down? I am so interested in the information withheld from everyone these days all because of money!! I want ll the information I can find an be able to spread the news without going to prison! Please help. This is my #1 passion , people NEED to open their eyes.
Reply | Reply with quote | Quote

# Protein Bars for kids — Kenneth Quinn 2013-08-22 09:26
Hello, I am trying to find a protein bar for my 7 year old son. I have trouble getting him to eat anything and he is to skinny and is borderline ADHD. All he wants to eat is junk. I want to get a protein bar that I might be able to get him to eat before he goes to school. I spent a while researching different bars, but they all have a few ingredients I don't like. I am looking for around 15 g of whey protein, Flax seed oil, no HFCS for sure. Maybe sweetened with honey. If there is chocolate I would rather have dark chocolate. I can't find anything like that. Does anyone have any suggestions?
Reply | Reply with quote | Quote
Refresh comments list