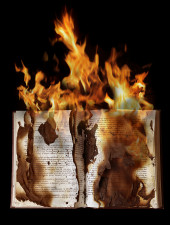 Our retailer had an old fashioned book burning of our magazines. Well, technically they were "recycled", but the point and the effects are the same. The mission was, after all, to prevent the public from being able to read them. We find it disgusting whenever corporate suits decide for themselves what the public has a right to see and learn about (our basic rights), but we should be accustomed to it from most of the media outlets.

It all started unexpectedly during a call with our corporate contact at Earth Fare, called Ivonne Goodwin.  The conversation started nice enough, but suddenly it turned hostile when Thomas inquired about the tentative roll-out to more stores for our next issue.  Ivonne suddenly and unexpectedly began verbally attacking both our magazine and our character, without any rational justification.  She was totally irrational, and off-the-hook.  She even attacked our journalistic credibility on one topic, until Thomas reminded her that the very statements in dispute were written by a doctor who had won the Nobel Prize on that topic.

She went so ballistic that she began screaming that it was unscientific, and somehow morally wrong to print that homosexuals have a statistically higher chance of catching A.I.D.S. than the normal population.  In other words, we were apparently supposed to be writing pro-gay propaganda, even though Ivonne had never mentioned this to us before.  Instead, that whole being-honest thing had just gotten in her way.  She also wildly ranted about our kosher foods article, which was "too Christian" for their audience, according to her.  The Witches' Almanac was, however, approved and considered appropriate for Earth Fare stores, which tells us a great deal about her character, and possibly about the character of Earth Fare Stores in general.  In other words, a total lack of it.  I guess the rule is: as long as a publication serves the other side, then it meets official corporate standards.  She actually attacked Thomas at one point to insinuate that we must be "conservative Christians", as if that would be something to be ashamed of.

These were all signs of the troubling times that we live in.  Thomas was never given the chance to mention to Ivonne that if Earth Fare customers are American citizens (and they are), then 96% of them are Christians, which indicated that she was hardly being motivated by sound business logic.  Something else was clearly motivating her.

The Smell Of Fear 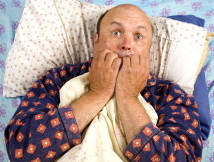 We had only been a colleague of Ivonne's for six months, but we already considered her to be a friend.  It is one of the things that made understanding her behavior so difficult.  We were in shock about it for days.  Whatever the truth in the matter was, the only certainty is that Ivonne was not sharing it with us.  From that, and from her behavior, it is trivial to deduce that she was terrified of something.  Her fear did not come from us, for we did not do, say, or write anything that could have caused her fear at any point.  In fact, we merely behaved like the geeky writers that we are.  So the question is: Where did her fear originate?  We are willing to bet that Ivonne got a phone call from a person outside the company, such as a representative of the F.D.A.  Perhaps it was a threatening call from a pharmaceutical manufacturer, and Ivonne just could not take the heat.  We cannot know who called to complain that we should be silenced, but we do know that we can no longer expect Ivonne to be honest with us, which is the very foundation of friendship.  Thus, we are in a period of mourning for both the loss of Earth Fare, and our friendship with Ivonne.  We apparently misjudged both, because character is never demonstrated by cowardice.  In better times, Ivonne had jubilantly told us that she was thrilled to be working with us in our paradigm shifting publication, but now we realize that she is integrity challenged; like most people nowadays.  One of the last things she told us, before ordering the immediate destruction of our magazines was that "the truth really does not matter", because what mattered more was appeasement.  In other words, if we had been more like Ivonne (unchristian and dishonest), then our magazine would still be on the shelves in Earth Fare stores.  To me, losing Earth Fare is a small price to pay in order to hang onto what is really important, and the qualities that make Naturally Good Magazine better -- the qualities that make it naturally good.