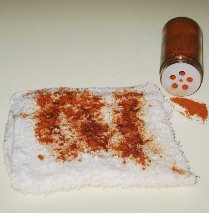 Cayenne pepper is a herb which should be added to foods whenever possible. Cayenne's benefits to the digestive system, circulatory system, and the heart have earned it the nickname "miracle herb". Some have used it to aid with weight loss, due to its ability to boost the metabolism. Cayenne pepper was first used as a stimulant by the Cherokee Indians. It is most notable for its effect upon the cardiovascular system. Cayenne has been known to stop heart attacks within 30 seconds when taken orally.

The benefits of cayenne usage were first reported by Dr. David Christopher, a naturopathic doctor who spent most of his life discovering and promoting alternatives to pharmaceutical medications. He spent his career being persecuted for challenging the establishment. He is the most noted pioneer in the use of cayenne pepper as medicine. Dr. Christopher was so instrumental in promoting cayenne in the naturalistic, nutritional, and herbal communities that he is sometimes referred to as "Dr. Cayenne".

Recent clinical studies have been conducted on many of the old time health applications for this miracle herb. Again and again, the therapeutic value of cayenne pepper has been medically validated.

Cayenne has been used medically for thousands of years, and most nations outside the Americas use such herbs as part of their standard protocols. These countries always have better results. In fact, the U.S. is ranked 38th in life expectancy, which places the U.S. health care system below Cuba's, South Korea's, Costa Rica's, Guadeloupe's, Singapore's, and 32 other nations, according to an investigative report by Mother Jones Magazine. It is worth noting that these countries do not have an organization like the F.D.A. to suppress truly conventional medicine on behalf of the pharmaceutical industry.

Why Everyone Should Use Cayenne Pepper

Cayenne should be used daily by anyone who has problems with his heart or blood pressure, because it is beneficial to both. Unlike pharmaceuticals, cayenne pepper helps blood pressure regardless of whether it is initially high or initially low, because it relaxes blood vessels, while causing the heart to beat more efficiently. These dual actions practically guarantee circulation improvement, regardless of the pre-existing condition. It is the difference between man's and God's medicine. Cayenne does what the 'experts' claim is impossible.

Cayenne pepper can be purchased in convenient capsule form at health food stores for people who wish to use it as a supplement. We always recommend avoiding regular retailers for supplements.

It is popular to use cayenne that is infused in warm water. Some people add half a teaspoon of cayenne to 8 ounces of water or tea, and then they gradually increase the amount of cayenne as their tolerance grows. In sufficient amounts, it can kill gastrointestinal parasites.

For the best emergency treatment of heart problems, cayenne should be mixed with taurine and held in the mouth, before swallowing. Do not forgo immediate emergency medical attention in the event of a heart attack.