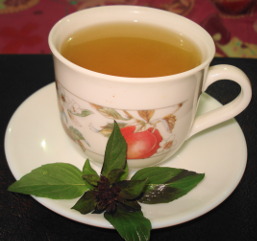 Holy basil has been dubbed the "Queen of Herbs" in India, where the spice originated, and by a multitude of users who herald its natural healing properties. Some folks even refer to holy basil as the "elixir of life", due to its reputation for promoting both longevity and overall physical well-being. The Indian herb is also known as Tulsi. For centuries, holy basil has been used as an ingredient in Indian recipes to treat a vast array of conditions, ranging from ringworm to malaria. Holy basil should not be confused with the Western spice, known simply as "basil".

Holy basil can cure malaria, a mosquito-borne illness that causes a high fever, lethargy, skin rashes, and nausea. If malaria is detected in its early stages, consuming just a few holy basil leaves has been successful in stopping the disease, the Bioactive Food as Dietary Interventions for Liver and Gastrointestinal Disease (2013) report revealed. Various mixtures of Tulsi and herbs, such as cinchona, have been used to combat and cure malaria for centuries.

Each part of the Tulsi plant can be utilized as part of a natural home apothecary. Despite having a bounty of therapeutic benefits, holy basil is still not recommended by the medical establishment or by regulatory agencies. The Tulsi plant boasts high amounts of calcium, vitamin A, zinc, chlorophyll, vitamin C, and iron.

Most Common Uses of Holy Basil 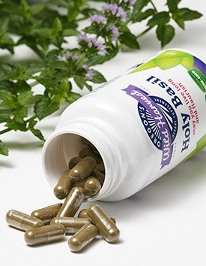 The Journal of Ayurveda study also found Tulsi aids in the prevention of cancer and actually retards the growth of existing cancer cells. The same review also declared Tulsi to be the "pre-eminent" Ayurveda herb. Ayurvedic medicine, or Ayurveda, as it is often shortened, is an ancient whole-body healing and wellness system that was created in India thousands of years ago.

"Tulsi has been found to protect organs and tissues against chemical stress from industrial pollutants and heavy metals, and exposure to cold and excessive noise, counter metabolic stress through normalization of blood glucose, blood pressure and lipid levels, and psychological stress through positive effects on memory and cognitive function and through its anxiolytic and anti-depressant properties."

-- Tulsi - Ocimum sanctum: A herb for all reasons,
Journal of Ayurveda and Integrative Medicine 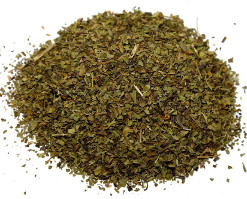 Holy basil also boasts a plethora of anti-bacterial and anti-microbial properties. These characteristics have prompted naturopathic practitioners to utilize Tulsi as an alternative to commercial hand sanitizers, as a water purification agent, as an ingredient in homemade mouthwashes, as a part of their holistic livestock husbandry routine, and as a food preservative.

Leaf extract from the holy basil plant is sometimes used to increase the speed of wound healing. Furthermore, it is used as a natural ingredient in anti-viral, anti-inflammatory, anti-fungal, and painkiller remedies. Tulsi leaf tinctures are often used topically to help protect and heal surgery incision wounds. This natural wonder is also beneficial in the prevention of infections, in the healing of mouth ulcers, in treating acne, and it reduces scar tissue. 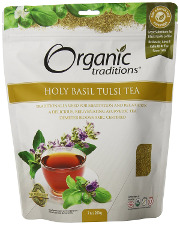 Health Wyze recommends this brand, which is good for making teas or capsules. It is available at Amazon.

Tulsi is a hardy herb that can easily be organically grown on a windowsill or in a container garden. Holy basil can also be purchased as a supplement at most natural health and herbal supplement stores.

Tulsi oil can be made by distilling both the flowers and leaves of the plant. To make a simple holy basil tea, steep about three teaspoons (1 Tbsp.) of the herb in boiling water for about five minutes. Flowers, leaves, or dried powder from leaves can be used. The leaves can have a slightly bitter taste, but they are used to make stews, soups, and similar recipes. Honey and lemon can be used to offset the bitter taste, as is the common practice for many other teas.

Tulsi - Ocimum sanctum: A herb for all reasons, Journal of Ayurveda and Integrative Medicine

Evaluation of anti-ulcerogenic and ulcer-healing properties of Ocimum sanctum Linn, Journal of EthnoPharmacology

Evaluation of ethanol leaf extract of Ocimum sanctum in experimental models of anxiety and depression, Journal of Pharmaceutical Biology

The Clinical Efficacy and Safety of Tulsi in Humans: A Systematic Review of the Literature, Evidence-Based Complementary and Alternative Medicine

Eliminating the Parasites That You Almost Certainly Have and Curing Lupus