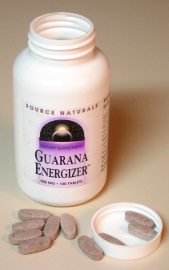 The most common complaints amongst those suffering with chronic disease and illness are fatigue, exhaustion, and the inability to concentrate. When the immune system is weakened, it uses up all of its reserve energy trying to fight off the threat. Likewise, due to our modern eating habits, the immune system of the average person is under constant stress, leading to chronic fatigue.

Guarana is an all natural stimulant which contains a substance called guaranine, which is often mistaken for caffeine. Guaranine is safer, and yet more potent as a stimulant. Guarana also contains large amounts of theophylline, theobromine, and tannic acid. It is rich in saponins which reduce the risk of cancer and boost the immune system. Guarana seed is not water soluble, so absorption is usually slow. While the effects of caffeine only last for around 3-4 hours, the effects of guarana can last for 8-10 hours. Other than elevating the blood pressure, guarana has proven to be harmless.

The Human Cognitive Neuroscience Unit, which conducted the four phase study concluded that, "the effects cannot be attributed to caffeine alone". Caffeine is found inside the nuts that produce guaranine, and it has been impossible to chemically separate caffeine from guaranine, so it is commonly believed that guaranine is caffeine. The people making this claim should acknowledge that guaranine and caffeine have different strengths, are found in different plants, and have somewhat different effects. The confusion demonstrates how primitive modern science is at understanding these kinds of nutritional substances. It is similar to the way that chemists cannot find a difference between synthetic and natural vitamins, but the human body will rapidly flush out excesses of synthetic vitamins. The human body knows the difference between organic (real) vitamins and synthetic vitamins, and it likewise knows the difference between caffeine and guarana.

Guarana is ideal for dieters, because it somehow releases and uses energy primarily from fat cells. This process is not understood either, but it has been repeatedly observed and documented. In a study published in the June 2001 issue of the Journal of Human Nutrition, guarana extract induced weight loss for over 45 days in overweight patients who were taking a mixed herbal preparation containing yerba mate, guarana, and damiana. Body weight reductions averaged 11.22 pounds in the guarana group, compared to less than one pound in the placebo group after 45 days.

It is difficult to find something that compares with guarana. It enhances mood, improves concentration, improves memory, dissolves extraneous fat cells, and provides abundant energy for about 8 hours, without jitteriness or side effects. There are many properties of guarana that remain unexplained by science, and the true chemical makeup is misunderstood. Some studies cited anti-oxidant and anti-bacterial effects, and fat cell reduction in mice when it was combined with conjugated linoleic acid (found in real butter).

In summary, guarana enhances their mood, helps with weight loss, and provides a much needed energy boost for most people. If you doubt the power of alternative medicine, then this may be the supplement that you need to become a believer. Guarana is not recommended for those with chronically high blood pressure. We also precaution women against using it during pregnancy, due to a lack of testing with pregnant women.

Why Everyone Has Attention Deficit Disorder, and Why It is Illegal To Cure

# Killed my flue — John Neeting 2013-01-04 21:31
Got a dose of the flue overseas that I couldn't get completely rid of, seemed to hang on like a bad debt. Took 'G' suppliment, cleared lungs out of crap [ coughed for 2 days ]and gave me my energy back and more. Was scepticle until tried, now I know i works for me
Reply | Reply with quote | Quote
Refresh comments list