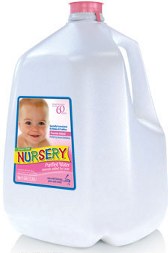 Whenever we visit Walmart, we purchase natural spring water. Last night, we realized that not only did they not have spring water remaining, but the area was filled with 'Nursery' brand water. We almost bought it, realizing that it was steam distilled. Just before we placed it into the shopping cart, we saw upon it a notice which advertised, "With Added Fluoride". They were bold enough to boast about it.

Even the American Dental Association (A.D.A.) warns that bottled water with added fluoride may be harmful to infants, and they now advise parents and guardians against giving to infants, or using it in their food. What makes this all the more telling is that the A.D.A. is the nation's leading fluoride advocate. Even the A.D.A. website, is concerned that children are getting too much fluoride.

"The ADA offers these recommendations so parents, caregivers and health care professionals who are concerned have some simple and effective ways to reduce fluoride intake from reconstituted infant formula. If liquid concentrate or powdered infant formula is the primary source of nutrition, it can be mixed with water that is fluoride free or contains low levels of fluoride to reduce the risk of fluorosis."

In fact, even the Food and Drug Administration (F.D.A.) admits that there are no reasons to add fluoride to the water of infants, because it cannot decrease the risk of cavities in non-existent teeth. Moreover, there has never even been evidence that ingested fluoride can aid anything. On top of this, the product is given to children before they develop teeth, so the fluoride is all deposited into the bones where it is damaging. The effects of fluoride upon bones throughout the body have been dismissed by governmental agencies, and the results of independent studies have been conveniently discarded by the A.D.A. and F.D.A. This is how the science of fluoridation operates. They ignore the fact that no studies have proven it to have any use when ingested, and they ignore 70 years of studies that prove it to be harmful. In fact, the same fluoride put into water supplies would be treated as toxic waste by the E.P.A. if it were spilled on the ground. Studies actually show either no relationship, or an inverse relationship between ingested fluoride and cavities. This means that either the fluoride does nothing, or it actually makes cavities more likely with populations ingesting it. If all of this is a little difficult to swallow (pardon the pun), then you are encouraged to review the governmental statistics yourself.

The website of Nursery fluorinated water absurdly claims that this toxin-laced water can help prevent damage to the teeth "before the teeth appear", and the F.D.A. has done nothing to stop these ridiculous medical claims. The Lancet review described fluoride as an "emerging neurotoxic substance" due to evidence linking fluoride to lower IQs in children, and brain damage in animals. Please consider this before purchasing fluorinated water. If ingested fluoride really did prevent cavities, would you rather risk cavities for those non-existent baby teeth, or brain damage for your child?

This water is assumed to be safer than tap water by many consumers, but it includes the most dangerous substance found in tap water, and in greater concentrations. Fluoride embeds into and attacks the growing bones, causing a condition known as fluorosis. Please take the time to read through some of the links below.

Note: Most water filters do not remove fluoride.

See the H.W. video for a shocking look at how infant formula is manufactured.

Fluoride can be neutralized with iodine.

The Walmart Petition asking them to stop selling toxic water for babies.