After all, there are plenty of teenage hooligans in the city of Sheffield, whom I could only imagine having guns.  I considered the risks of greater fatalities during the Oldham Riots if guns had been more actively involved, and the risks of providing guns to the teenage Britons who appear to have no respect for human life.

Then I came to the United States at age 16.  For the Brits reading this, "the right to bear arms" is a fundamental part of American culture, and is guaranteed to them based upon an almost sacred document known as the United States Constitution.  Guns are openly allowed in the U.S.A., and around 50% of U.S. households contain at least one gun; yet Americans do not live in fear of being killed at any moment.  In fact, violent crimes like assault and rape are lower in the U.S. than for the United Kingdom.  This is despite the fact that the U.S. has five times the population of the U.K., and despite a huge percentage of Americans having firearms.  America may be armed to the teeth, but it is a safer and more peaceful country to reside in because it is so well armed.  It is understandable when you realize that British criminals always know that their victims will be unarmed and defenseless, and any citizen trying to stop them will go to prison.

The most prominent difference between the two countries revolves around the sentencing of criminals.  Killing someone in Britain will not mean that you will lose your life, and you would very likely be released from prison in only 5 to 10 years.  There is a far greater sense of accountability and personal responsibility in American culture, and this is reflected strongly in the judicial system.  It has been argued that sentences in the U.S. are too harsh, but there is very little argument that British sentences are too lax.  With no threat of forced accountability, especially in the case of youths, violent crimes are extremely common.  Gun violence actually increased in Britain when guns were banned.  It did not decrease, as was predicted by the people who disregard history.  Guns which are owned by criminals are never confiscated, so criminalizing guns only disarms those who would purchase them legally, and use them responsibly. 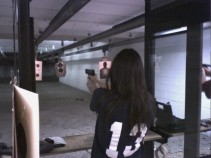 In retrospect, the legalization of guns could be one of the best things to happen to Britain.  Firstly, the right to bear arms is what differentiates a subject from a citizen, and a slave from a freeman.  Secondly, the people who we believe must be kept disarmed are already beating each other to death with baseball bats, bricks, shards of glass, and knives.  The problem with these gangs is that they have been raised in a society which teaches a complete absence of consequences, no matter how horrendous their actions may be.  If guns were made available (although many of the criminals already have them), and sentences were made harsher at the same time, then drastic changes in society would take effect.  The general public would be safer, because criminals are less likely to attack when they know their victims could be armed, and their crimes would thereby become a risk their own lives.  This was proven in Kennesaw, Georgia, when each household was mandated to have a gun, and crime dropped by 89%.

In other words, a large portion of the criminal class will not care about the permanency or concept of death, until they fear for their own lives.  It is at that point, which would not take long; violent crimes would plummet.  People would be safer, and they would be able to defend themselves from both criminals, and the government (if necessary), which has shown an increasing tendency to infringe upon the basic rights of the British people, without any fear of retribution.  This is usually the true reason why guns are banned by governments, even though oppressive governments rarely reveal their true motives.

Something The British Do Right

The British seem to be far more concerned about their health, and the quality of their produce than the Americans.  Genetically engineered foods are far less tolerated, and Aspartame has been driven out of all the main retailers due to health concerns, alongside artificial colors.  Britain's Walmart chain, Asda, pledged to remove all artificial food additives.  Studies have proven that they dramatically increase hyperactivity and conditions such as Attention Deficit Disorder (A.D.D.) among children.  It did not take long after those studies were released for public pressure to lead the Food Standards Agency (F.S.A.) to encourage manufacturers to remove artificial colors from products.  The manufacturers responded appropriately, to ensure continued approval.  This included the popular brands: Kraft's Lunchables, Skittles, and Starburst, among others.  These same companies still knowingly distribute the same toxic substances to American children in utter disregard to what it is doing to them, and with the encouragement of U.S. food regulators.  There is an agenda at play so dark that few people would believe it if I wrote about it.

No such health-minded changes have even been hinted at in the United States by any governmental agencies, especially not the Food and Drug Administration, which is the F.S.A. equivalent.  The Center for Science in the Public Interest (CSPI) formally petitioned the F.D.A. to take a similar action in June of 2008.  It was suggested that either a complete ban should be introduced, or warnings should be placed on products, particularly because the foods which use these colors the most are heavily marketed to children.

"(We) didn't find a reason to change our conclusions that the ingredients are safe for the general population... Also note that the European Food Safety Agency has a similar view as FDA's."

It is common knowledge among the health community that there are plenty of studies which have linked artificial colors to hyperactivity, and as being carcinogenic, and some of them have been around for decades.   What I find most disturbing about the F.D.A. quote is that the official position of the European Food Standards Agency is used as an excuse for their own ignorance, and refusal to protect children. In the case of the E.F.S.A., the individual countries are left to make their own decisions about such matters, and so its choices are not even a defining influence in food regulation.  Unless the United States has plans to rule over the planned North American Union (NAU) some day, there is no comparison between the two organizations.  Regardless, the F.D.A. should be basing its decisions on scientific findings instead of the decisions of the E.U..

In Britain, pharmaceutical advertising directly to the consumer is banned.  It is banned for lots of good reasons.  In the case of drugs, the public really does not know what is best for it.  Pharmaceuticals which are marketed in the U.S. are those which are fresh out of the cherry-picked clinical trials; which means that in many cases (like Vioxx), members of the general public are used as guinea pigs.

Pharmaceutical advertising to physicians is known to be fairly ineffective, because in most cases, safer and cheaper alternatives already exist.  A doctor is given the statistics of success rates, the side effects, and the proven actions of the drug.  In comparison, Americans are given colorful moving images of pharmaceutical-laden perfect families; whilst they sit down in the comfort of their own homes.  It is a huge manipulation game, which uses images of the idyllic life to convince people that they need drugs.  In many cases, people use these commercials for self-diagnosis, as is the case with Restless Leg Syndrome, and other conditions whose diseases were discovered only after a treatment was created for them.

I think that there is a lot that both countries can gain from each other, in order for us to create a better world.  In my mind, that would be a world in which personal choices are free, individualism is encouraged (not dismissed as showing terrorist potential), and each person may do as they please as long as they do not bring harm to others.  Please leave your feedback, as I am really interested in your opinions on this.