There are many children in this country who are living their lives behind bars, with an inherent lack of understanding of their sentences. In many cases, they simply cannot understand, nor accept, that they may never be released. In the most disturbing of instances, children have been locked away for simply being with an offender who committed a crime, without actually playing an active role. Even if children were capable of making the same adult decisions, with the same degree of guilt, it is still a fact that children are given no choices about who their companion guardians are, so even more egregious is the fact that they are so often convicted based only on guilt by association. Furthermore, in contrast with the society's assumptions about these children; many of these kids were thrown away in prison for crimes much less severe than murder.

Which 3rd World nation am I describing here? Oh yeah, I forgot it is the U.S.A., the same "civilized" country that is on Amnesty International's watch lists.

The life without parole sentence assumes that the offender is beyond all rehabilitative efforts, and this remains true even into adulthood. These youthful criminals are judged to be so bad that it is supposedly unreasonable for the judge to believe that they could ever change. In other words, this process normally involves discarding the Constitution and the rule of law in favor of satisfying a judge's egotistical desire for pay-back. It has become society's way of discarding unwanted children. These children are given no education, psychological evaluations, counseling, or any of the programs which are designed to allow later integration into society. This is because it is assumed that they will never re-enter society; so the needs of these children will never be met, despite the fact that we would go to prison ourselves if we ever treated a child in this fashion.

All of this may soon change. Under this bill, those who were sentenced for committing an offense before they reached 18 will be given a second chance within their first 15 years of incarceration.

Excerpts from the bill read: 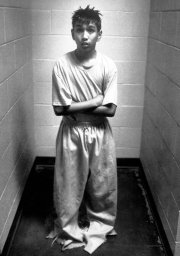 Condemned To Die In Prison

The latter argument exposes something which is becoming more well-known in recent years. State-appointed lawyers do not do their jobs well, and rarely try. They are awful; mostly because there are not enough of them. Inmates call it "buying justice" whenever someone manages to pay for a good lawyer. When there is enough publicity on a particular case, some lawyers offer to work for free. It is both a good publicity stunt, and in rare cases, they actually believe in the innocence of the offender, or the misapplication of the law enough to motivate them to work for free.

The Supreme Court has also said this month, that it will debate the constitutionality of life without parole for juveniles. Hopefully, it will make a similar ruling to the one that it made in regard to the execution of young offenders. The Justices should understand that young people are more susceptible to other influences, are far more immature, often lack understanding, are more prone to lack the ability to physically leave a criminal situation, and they have an extraordinary chance for rehabilitation.