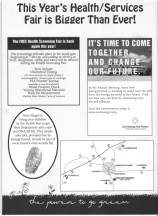 Our power company is encouraging parents to bring their children to a fair in order to have their D.N.A. cataloged, along with their fingerprints.  The advertisement implies that this data should be stored in the home, so that it can be used in some sort of health emergency.  If this were the case, why would the D.N.A. need to be registered with them?  It would be far more logical for the parent to simply cut a small amount of hair from the child, and keep it at home if there were such a need.  In fact, such D.N.A. samples can already be easily obtained from a home if there were a need for it, even after a child has disappeared.  The reasoning cited is obviously bogus, and is meant to white-wash whatever the real reasons are.

Whenever the unique markings of a person are requested from any corporation or government, serious moral questions must be asked.  Suspicion should be a natural response, and in particular, concerns should be magnified whenever the D.N.A. of all children is being specifically requested.

Increasingly, the mainstream media has attempted to marginalize the concerns of privacy advocates as having come from the paranoid, and these same media outlets have demonstrated their agendas by portraying privacy invasions as 'normal'.  We must remember that normality does not automatically assume safety.  There are believed to be over 5,000 schools in Britain which are already using biometric identification systems, according to Leave Them Kids Alone (LTKA), a group founded by concerned parents.  From this system, the British government has a growing database of about 1,000,000 children: some as young as five.  These records are known to be accessible to law enforcement, but no list of agencies with access has ever been disclosed.

Some schools have now chosen to use these fingerprint systems to control school lunches.  Parents put money into an account, and the account is supposedly accessed through the fingerprint of the child.  This also carefully tracks whatever the child has eaten.  The full results of this micromanagement experiment are currently unknown, but if we can learn from history, then we will see that this will create a generation with even more cases of 'A.D.D.'.  Children are frequently misdiagnosed with Attention Deficit Disorder when they become defiant toward the perceived authority figures who are routinely micromanaging them.  Other schools are using these systems for examinations; supposedly to stop students from impersonating each other, as if the teachers did not actually know the children's names.  Schools glorified the new system as kids found it 'cool' and exciting.  Of course, this is entirely intentional.  Children are being taught that there is nothing troubling about providing their fingerprints, and that it is actually a normal part of daily life.  What's more, providing a copy of their biometric details is portrayed to be exciting, by exploiting the children's natural fascination with technology.  What sort of world are we preparing these children for?

Here in the United States, the process of using biometric scans on children is very new, but it is not unusual for England to be the test subject for plans which later arrive here.  Americans should watch closely, for we are already beginning to see the introduction of a similar plan.