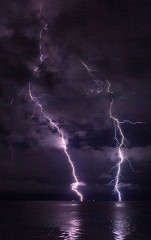 I went to see a movie today, entitled "Expelled: No Intelligence Allowed". The movie discusses the theory of Intelligent Design, which proposes that even the smallest units of life, such as DNA and human cells, are so complex that life must have been intentionally designed by a being with a far greater intellect than humanity's, and that it is mathematically impossible for life to have occurred by random chemical combinations. This concept exists in direct defiance of the evolutionary theory which believes that life was created spontaneously, and that it later evolved into all the different species. The Theory of Evolution has taken grasp inside all academic areas, and many of those who teach it fail to acknowledge that it remains only a theory, and one that has many holes.

"I was a young man with uninformed ideas. I threw out queries, suggestions, wondering all the time over everything; and to my astonishment the ideas took like wildfire. People made a religion of them."

Charles Darwin was a Christian until his daughter died from what he believed was a genetic weakness due to his own inbreeding. Darwin had incestuously married his cousin (which was forbidden by his own religion). He later blamed God for murdering his daughter, and 3 years later, he sought vengeance in a book discussing his new idea of Natural Selection. Throughout his articles, he made numerous negative references to Christianity, showing more of an agenda than an adherence to scientific principles, which is the case for most of the obsessive evangelists of evolutionary theory.

"As a scientist, I am pretty hostile to a rival, ah, doctrine... But if your aim is to kill religion, as mine is, [then] just let me finish. If your aim is to kill religion, then since evolution is manifestly true, then if there are people out there who really believe that if you are an evolutionist then you've got to be an atheist, then all I've got to do is persuade them of evolution which should be comparatively easy, since the evidence is overwhelming, and I'll turn them all into atheists."

On his death bed, Darwin repented his sins, and admitted that the Theory of Evolution was bogus. His family denies it happened, because their fame and fortunes would be destroyed if this were common knowledge.

Expelled: No Intelligence Allowed was created in the hope that people would listen to the ideas behind Intelligent Design, and allow the frontiers of it to be heard. At present, many of those who dare mention this concept in schools, universities, or in published works, face being fired from their jobs, and vilified throughout the scientific community. Intelligent Design explains many of the holes which are currently left unfilled by the Theory of Evolution.

I advise you to watch this movie, as I think that it is very capable of effecting change in public opinion, and the teachings of evolution. Intelligent Design is a concept which could allow science and religion to work together as they did throughout most of history.

You can view the trailer for Expelled here.

For some comic relief for this heated topic view this video.