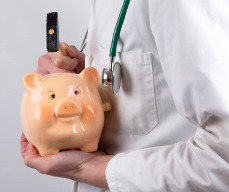 Within these arguments are multiple layers of intellectual dishonesty which should be addressed. Foremost amongst the fallacies is a contention that healthcare is expensive by its very nature, whereas in actuality, healthcare has been arbitrarily made expensive. At Health Wyze, we spend the bulk of our time discussing better alternatives for the treatment of chronic diseases, but for the purpose of this essay, we shall pretend that allopathic (orthodox) medicine is the only medicine, in order to avoid unnecessary complexity.

Hospitals charge what they do because they can. If a business owner knew that he could succeed in routinely charging his customers thousands of dollars for a product, even as his competition only charged hundreds, then he would do it, for it would be to his betterment. In almost every industry, a business owner is unable to do this, because he knows that when he shows his prices, his customers will compare them to the other available options. If his prices are set unrealistically high, customers will flee to the competition. This is the manner in which a free market keeps prices low and competition vibrant. Throughout the industry of American healthcare, patients are not told the prices for even routine services, and they never get billed until after they have received service. Prices, therefore, vary widely from one hospital to another, for exactly the same treatments. In order for a free market-based system to work, prices must be publicly available, which would force medical facilities to compete in an area that they never have before: price. At present, U.S. hospitals only compete in a trivial way. They compete over who has the newest (not necessarily the best) equipment, and who has the most toys. They do not compete on efficiency, efficacy, price, or in any other way that might benefit patients.

The argument that all medicine is expensive is categorically ridiculous. An ultrasound that is taken of a pregnant woman tends to cost around $100 - $150. Exactly the same scan, when done to view the pelvis, costs around $1000. Simply staying overnight in a hospital room often costs between $10,000 - $30,000. The same hospitals that charge these rates are not having a shortage of beds. They are simply charging what they can get away with. An MRI scan can cost between $400 and $12,000, with the disparity being solely based upon which hospital one seeks. Rates are not going to decrease in the current climate. If one imagines himself as a hospital owner who is charging $400 for MRI scans, and realizes that his competition (who is thriving) is charging $12,000, what motivation does he have to keep the rate low? However, with a transparency of pricing, his advantage would be a dramatic increase in business, since patients would readily drive cross-country to save $11,000. His pricier competition would soon languish, as it deserved to.

Some would argue that if what is being suggested herein were to be implemented, then only those who offer mediocre services would prosper, following the tired argument that healthcare must be costly to be efficacious. However, we need not stop with the transparency of rates, but we should also embrace transparency of success and survivability. If hospitals were required to publish their history of "complications", then customers could appraise if higher rates really do equate to superior care, or if the money is just recklessly burnt on extra machines and new sports cars. In practice, hospitals would have to start adapting to whatever works best for patient care, and doing so would eventually help their profit margins. For example, since midwives have been proven to result in lower infant mortality rates, and they are significantly cheaper than doctors to employ, hiring midwives for birthing would suddenly be incentivized.

Contrast this to what Americans actually get with their closed market of medicine. America currently has the highest infant mortality rate in the civilized world, because of how pregnancies are institutionally treated like a disease that requires expensive intervention by doctors, who in most cases, have never even witnessed a natural childbirth. The result is the most expensive and drug-laden infant care in the world, and the deadliest infant care in the 1st World. In infant mortality, America is ranked barely above countries that do not have reliable electricity or clean water in their hospitals. 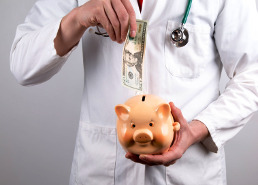 Perhaps the most outrageous aspect of our unaffordable medicine is that medical facilities typically have a non-profit status, which means that whilst they steal from their sickly patients in a way that would make most of us struggle to sleep at night, they pay no taxes whatsoever. Charging $10,000 for a hospital bed unmistakably indicates that these enterprises, do in fact, unabashedly exist for extreme profit. Awhile the rest of us are forced to pay their share of the taxes.

At present, the high insurance rates are an absolute necessity, given what medical facilities charge. If hospitals did not charge unreasonable fees, insurance companies would no longer be necessary, and they know it. This is why the Affordable Care Act only made health insurance mandatory, instead of actually making it affordable, for this is exactly what the insurance companies sought.

Insurance companies and medical facilities share the blame for America's medical catastrophe. The insurance companies want our medical expenditures to forever remain beyond what is reasonable, even as they outwardly and disingenuously pretend to be seeking better pricing for us. In fact, the biggest insurance companies were invited to the White House to help craft the Affordable Care Act (Obamacare). Patients who were already suffering under the system, however, were not invited to the discussions. The result of the partnership was a Christmas present to the health insurance industry that it could not have possibly refused. The bastard child of their incestuous relationship was, of course, the Affordable Care Act.

The main principle of the Affordable Care Act, now codified into federal law, is to force private citizens into purchasing insurance services that they do not necessarily want, or face being fined in other ways that are equally unconstitutional. Now, American citizens are health insurance customers at the barrel of a gun, except for those who are too poor. Our poorest are punitively taxed, for already being too poor to buy into the glorious new system, which is actually just the old system with even greater expenses. This disgrace harkens back to the debtor's prison system of colonial times, which had so enraged the Founding Fathers, except that now an individual needs not go into debt to be coercively placed into debt, for his option to shop is no longer voluntary. This gift is why the insurance companies were so quiet during the passage of Obamacare. They were being offered a gift horse of epic proportions. Meanwhile, our younger generations, which tend to believe in their own self-evident entitlement, were so ignorant of history that they accepted that socialism is truly about helping poor people.

The insurance cartel also suckles from governmental over-regulation, while they likewise pretend to be opposed to it. The regulations help the insurance companies to block upstarts from being able to compete. In other words, there are so many regulations that only the well-established companies, with their vast armies of attorneys, can hope to comply with them all. Of course, none of this cronyism would be possible if the government did not actively participate in a charade that quietly keeps the market closed through regulatory chicanery.

Furthermore, governmental regulation prevents people from purchasing insurance across state lines, artificially limiting competition between insurance companies. This regulation, amongst others, has been in place since long before the Affordable Care Act, and counters the accusation that we had a free market that was failing before Obamacare. It was not a free market, and Obamacare simply pushed a bad system into a tailspin. In an increasing number of states, there is only one insurance company that provides enough coverage for people to avoid being subject to the Obamacare fine ("individual mandate"). The unfree market has created the absence of competition, so rates will remain exaggerated.

Part of the answer is accepting people as human beings, and realizing that whatever works for one person does not necessarily work for another. Those who promote the state as the solution are denying that people are intelligent enough to make their own decisions. If people choose not to visit their doctors for routine checkups, they have the right to choose insurance that does not cover such frivolous visits. Similarly, if they live healthy lifestyles, and are opposed to pharmaceutical usage, then they have the right to choose insurance coverage that does not cover prescriptions. These are decisions that we are told only bureaucrats can make, awhile we are reminded that healthcare and insurance remain unaffordable. They were made to be unaffordable, and the real solutions are politically ignored, under the guise of compassion for the poor.

Countries like England are heralded as examples of countries in which healthcare is provided for "free". Of course, such healthcare is never free. It is paid for by crippling taxation. Those who live in such countries do not know what they spend on healthcare, for their health insurance fees are mixed in with other taxes. One in ten parents in England admits to skipping meals so that they can afford to feed their children. The elderly are typically given inadequate care, and a common subject of conversation is how the elderly are used for experimentation in hospitals.

Socialism is not a model that should be embraced, nor is this the standard of living that Americans should be seeking. America has never simply followed what the rest of the world does, and has usually been better for this reason, not despite it. Americans do not flee to other countries for surgeries, but people from the countries that are trumpeted by today's left do, in fact, come to America seeking superior care. Making healthcare affordable for all can be done by simply embracing a free market, but embracing a socialized system will always leave some people without care, ironically by the same people who attack free market supporters for a supposed lack of compassion.

The Sleight-of-Hand Behind It All

Fascism is the merger of state and corporate power, as we are seeing in healthcare. Fascism is technically a type of extended socialism, as sure as communism is. So, while we were told that Obamacare was the fix to a "failed free market", in actuality, Obamacare was, at best, a switch from a fascist system to a more socialistic system, which is simply edged closer to communism. At no point did capitalism or a free market enter into the healthcare equation, and it has not for over a century.

You may watch this directly on YouTube if there are any problems watching the video at this site.