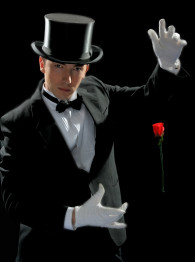 Demonstrating the principles of modern medical science.
Guess which is less deadly statistically: cigarettes or pharmaceuticals? Which is most likely to cause deadly cancers: cigarettes or radioactive cancer screenings, such as mammograms? Sunscreens (not sunlight) cause most of the skin cancers, and this is why people who are exposed to the most sunlight tend to have more skin cancers -- because they use sunscreens the most. Life-giving sunlight produces vitamin D-3 in our skin (removing excess cholesterol in the process), and this natural vitamin D-3 is helpful in eliminating approximately 70% of cancers, as was demonstrated by Dr. Johanna Budwig.

Exposing the mythology of modern medicine is a journey into how the chemical industry, the medical establishment, and our media all work together to cook mutually profitable "science".

CNN recently ran a report titled, Ginger May Help Chemo Patients With Nausea. Modern medicine (allopathy) finally discovered that ginger is useful, in 2009. This is especially underwhelming for people who are knowledgeable about traditional medicines, because we have already known this for about 4,000 years and counting. The ginger revelation was supposedly news, because establishment doctors "discovered" that ginger was useful, in 2009.

Perhaps ginger's effects were never "discovered" by them before now, because like most other natural medicines, it cannot be monopolized by the pharmaceutical cartel; and thus it cannot be "regulated" out of our control. With all of the backlash against chemotherapy that is ongoing, perhaps they felt that they had to throw us a bone to keep the natives at bay. However, in their typical propagandizing fashion, they just could not leave it at that. They have been running their game for so long that they just do not know when to stop. Now, let's look at the information from a couple of the related CNN health articles, and let the games begin!

"The death rate due to cancer has declined in the United States in recent years, largely due to better prevention and treatment."

The drop in cancer deaths is because of people in our community, who are freeing people from their doctors, and encouraging them to take control of their health. A good example of this work is the explosion of the organic produce industry, which strangely enough is not being encouraged by the medical industry.

"It's great news that a large chunk of the decreased death rates in women can be attributed to breast cancer. This is largely due to a decreased use of hormone replacement therapy (HRT), which has been shown to increase a woman's risk of developing breast cancer."

At least this last statement was true, for they admitted to having actually caused the cancers with their treatments. This is just something else that has been known throughout alternative medicine for a very long time.

The game is afoot again. Did you miss it? The whole truth is that the radiation from mammograms causes cancers, so whenever less women get mammograms, then less women likewise get cancers. The breast cancers that were detected this year have usually been caused by last year's "preventative" mammograms; ironically enough. Underarm antiperspirant is another major contributing factor, but they will never mention this either, because that fact too harms the same chemical industry to which they are all beholden.

"Fat brings on puberty earlier and early puberty is a risk factor for breast cancer..."

Has fatness been discovered to be the real cause of puberty? Both the obesity and early puberty epidemics are proven to be in large part due to the non-organic, corn-fed, high-fat meats, which are laced with trash from their chemical industry, such as toxic nitrate salts, and in particular, the pharmaceutical industry's own synthetic growth hormones to really pile on the pounds. Natural and organic meat is nothing like what is on most retail shelves. Only a sliver of the truth was told once again, in order to protect themselves, their regulatory buddies, and their corporate partners. 'Science', in other words. Natural fats from range-fed, organic farm animals, and fats from natural sources (like butter) are absolutely harmless, unless they are consumed in extremes. Moreover, the chemical industry's hydrogenated fats and their so-called "healthy cooking oils", which they have been promoting, are the real reason why the businesses of cardiology, oncology, and dieting are booming. Realize that your doctor is a business man, and then it suddenly makes sense.

" ... researchers found that a smidgen of purified ginger given in supplement form (equivalent to one-quarter teaspoon to one-half teaspoon of the spice each day) could reduce chemotherapy-related nausea by 40 percent on the first day of treatment when used in combination with traditional anti-nausea medications."

The 40% trick was an attempt to damn ginger with faint praise. Notice how they call their own patented, experimental, chemical drugs "traditional medications"? It's just incredible. This is another psychological game to plant into our minds an association between their experimental drugs and time-honored therapies. Notice also how ginger was presented to be partially useful too, but only when it is combined with their "traditional" medicines. Since ginger is labeled to be the non-traditional treatment, are we to believe that ginger is really a new and experimental drug? Perhaps it was new and experimental when Moses used it. This routine is just another back-handed slap against superior alternative therapies; and most importantly, they used this farce to promote the value of their "traditional" drugs. On one hand, they give ginger some credit, and when we are not looking, they also throw-out that ginger must be combined with "traditional" pharmaceuticals; since it was taken for granted that the "traditional" pharmaceuticals may be used alone, but ginger is too dangerous or ineffective alone. We ponder if it is physically impossible for them to acknowledge the futility of using chemical warfare as medicine, or to simply tell the truth.

What is really sad is the broken premise upon which their arguments were framed. They claimed that chemotherapy is more bearable with ginger, so ginger is suddenly being medically approved to promote the use of even more chemotherapy. This is perverse on so many levels. Of course, superior medicine continues to be kept in the "complementary medicine" zone, for treating the aftermath of the drug poisons, which are themselves only being used to treat a single symptom of cancer (tumors) -- instead of actually treating the cancers themselves. The whole affair is a complete mockery of medicine. For those of us in-the-know, their patronizing platitudes about ginger having a place in medicine (just above shaman chants) is hardly reassuring that these people are likely to change any time soon and the carnage will continue.