Is Decaffeinated Really A Healthy Choice? 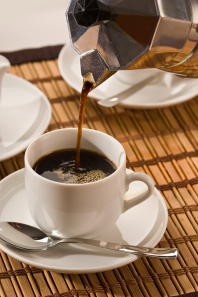 Update Notice: We are no longer certain that the Swiss Water Method of decaffeination is safe. For now, our recommendation is to entirely avoid decaffeinated teas and coffees.

Decaffeinated drinks have been touted as a healthy alternative for several decades at the behest of the chemical industry, but these drinks are often more dangerous than the unmodified versions.

Early decaffeination efforts were abruptly terminated because of the toxic solvents that were used in the process (benzene, chloroform, and trichloroethylene).  Of course, the F.D.A. is okay with benzene being inside your soft drinks (Coke, Pepsi, etc.), where it can be found in remarkably high amounts, and inside all of your microwaved foods.  Money from its industry partners makes all the difference.  In the early days of decaffeination, the new industry was not lucrative enough to buy F.D.A. safety studies.

The industry next switched to dichloromethane. It became the solvent of choice in the early 1970's, because of its 'lower toxicity', but it soon became public knowledge that dichoromethane was carcinogenic too, and its use came to a rapid halt.

The idea of decaffeinating drinks is modeled after the belief that caffeine is unhealthy in even small doses, which is yet another lie.  While those who drink 10+ cups of coffee each day may benefit from switching to decaf, the same cannot be said for the rest of us.  Caffeine, in moderation, will not cause problems unless a person already has a condition like excessively high blood pressure.  For reasonably healthy people, coffee consumption is not a risk to their health.  In fact, unaltered coffee has even been shown to have some health benefits; in moderation, of course. It is therapeutically used in the Gerson cancer cure.

It is particularly troubling when people avoid coffee because of the caffeine, and then switch to those ungodly energy drinks, which really deserve a full article of their own.  Almost all of the energy drinks that are found in typical retailers are poisonous, and you will have trouble finding any natural ingredient on the labels.  If you try, then you will find that the processed, bleached, white sugar is as close to a natural ingredient as you will find inside them.  Even their so-called vitamins are actually the chemically synthesized versions, so a body will reject approximately 85% of each of these "vitamins" as an unidentifiable, potentially toxic substance; eventually making the person more fatigued, and prone to illness, because his immune system will be burdened by the process of flushing out these unknown chemicals.  You may notice having bright yellow urine only hours after taking such "vitamins", indicating that your immune system is in overdrive flushing out the chemically produced, artificial vitamins.  Coffee is a much healthier option than energy drinks.  Although, we do recommend being cautious about which "creamer" is used in coffee, and we also recommend only using evaporated cane juice (the only pure sugar crystals).  Please note that all chemically synthesized artificial sweeteners are likewise terrible -- and we're talking brain tumor terrible.

If you still feel that decaffeinated coffee is the way to go, then you may wish to read how it is made; so that you can make a more informed choice regarding your health.  There are three different methods of decaffeinating, and I shall list them in order of popularity; not preference.

Proponents of this decaffeination process tell us the rinsing and steaming processes remove all of the chemicals.  If that were so, then why was it previously necessary to switch from benzene, chloroform and other toxins, which were also supposedly steamed-out?  Many women will recognize ethyl acetate from their nail polish remover labels.  Consider how dangerous you know this to be, and how it will destroy and melt items that you spill it upon.  Could you ever consider it to be "low in toxicity"?  It is known to cause serious reactions with the eyes, skin, central nervous system, and the respiratory system.

You must decide if trace amounts of these chemical solvents should be inside your morning coffee.  Do you think the coffee manufacturer or the F.D.A. will pay the expense of your chemotherapy, or even your funeral, when eventually the inevitable premature death happens?  Coffee consumption can elevate your blood pressure slightly for several hours, but consuming benzine, methylene chloride, and ethyl acetate regularly will vastly increase a person's chances of contracting a serious disease, such as cancer; for the rest of his life.  The industry's marketers, including the ones wearing the white overcoats, never mention this.  Mentioning it would be bad for business, and they know what happens when the knowlege is made public.

While this is technically another chemical method of decaffeination, I would much prefer this over the previous option, and I can see no health risks from it.  Unfortunately, there is inadequate labeling to separate coffee produced in this manner from coffee processed by the former chemical solvent method.  Russian Roulette anyone?

The Swiss Water Method is a safe, chemical-free, decaffeination process; which is well labeled.  Organic decaf is made using this method.  Coffees decaffeinated in this manner are more flavorful than other decaffeinated coffees, but have slightly more residual caffeine.  Whenever a drink is decaffeinated, it will still contain between 3 and 13 mg. of caffeine, which are negligible amounts.

In conclusion, neither caffeine nor coffee are actually unhealthy in moderate amounts; but can be if taken to an extreme. If you are going to drink decaf, make sure that it is organic, or at least made with the Swiss water method.  Above all, do not seek alternative sources of energy from energy drinks.