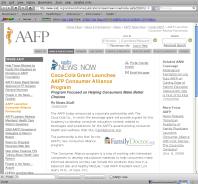 According to the Associated Press, the new drink will not contain sugar; and therefore, it must be healthy. In reality, the dangers of chemically synthesized artificial sweeteners are exponentially worse than those of sugar, and are even considerably worse than the bleached sugar extracts sold in retailers as "sugar". Compound this with the carefully ignored facts that the average soda dramatically shifts a person's pH into the acidic range, and likewise, the artificial colors are being equally ignored. Sugars are actually the healthiest components of Coke-a-Cola drinks at present.

"We've made a conscious effort to diversify our sources of revenue."

Soon enough, the article on the A.A.F.P.'s website will disappear, as they always do. It has already received plenty of bad press. The current medical establishment depends on the continuing mythology that we have the best health care system in the world, which is driven by compassion, innovation, and a desire to create a disease-free America. Therefore, the media is usually well regulated, and It will not be long before there is no mention of this partnership to be found.

For this reason, we have made a screen-shot so that such "partnerships" can not be hidden from public view. The American Academy of Family Physicians even boasts, "The partnership is the first for the AAFP's new Consumer Alliance program". That's right, there are more such partnerships to come. Perhaps we could recommend an alliance with Nestle, or Burger King next. There are plenty of junk food companies that could soon be bearing the "A.A.F.P. recommended" logo. This is an age of medicine that will be mocked by generations to come.

"Coca-Cola is among several corporate contributors to the American Academy of Family Physicians Foundation, a separate philanthropic group. These contributors include many drug companies, McDonald's, PepsiCo and a beef industry group."

There is little more than needs to be said, but you should remember these things whenever you hear about the "real medicine" of "science".