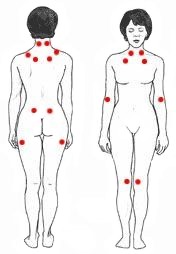 The painful, or sensitive spots on a fibromyalgia sufferer.

We briefly wrote about monosodium glutamate and aspartame previously.  Both are excitotoxins, which means that they over-excite the brain's neurons, until many of them burn-out.  We have always recommended that our readers avoid these substances, since they are leading causes of disorders which include epilepsy, diabetes, obesity and sudden heart attacks (even amongst young athletes).

We recently discovered a common disease which appears to be caused only by these substances, and cured simply by their avoidance.  What is astounding is that this discovery was made through the F.D.A.'s website.  I do not believe there has ever been a natural cure posted on their website before, but it was hardly one of their main pages.  The fact that you have to learn about it from us is a clear indicator of how corrupt the medical industry and its regulators are.  The page with the information appears to be an old, archived e-mail; so it is likely that this information was never intended to be made public.  We feel certain that it was not meant to be.

It is estimated that between one and five percent of the population suffer from fibromyalgia, a condition with no officially recognized cause.  The medical establishment offers many possible explanations, including abnormal pain transmission responses, decreased blood flow, emotional disorders (it's all in your head), and comically as always: those bad genes.  Our research has shown that fibromyalgia appears to be nothing more than the symptoms of excitotoxin exposure.  Excitotoxins may, or may not be the sole cause of this condition; but nevertheless, it is certain that they greatly exacerbate it.

The medical establishment currently treats fibromyalgia with S.S.R.I. antidepressants, since anything without a successful pharmaceutical treatment must obviously be psychosomatic.  The most common antidepressant given is Cymbalta.   Also employed are sleep aids, pain killers, and physical therapy.  In other words, they have no idea what to do, so they just treat the unexplained symptoms with various techniques perpetually.  This makes for good repeat customers, who are made to feel as though something's being done, but it is not exactly good medicine.

Studies about dietary changes for fibromyalgia treatments are lacking, because this condition is not usually studied from a non-pharmaceutical perspective.  However, some small studies do exist, and the Internet is riddled with sufferers who eliminated their intake of MSG, Aspartame, and all other artificial sweeteners, with great successes.  Studies have shown significant decreases (often complete elimination) of symptoms from either the elimination of excitotoxins, or from controlled vegetarian diets, which were by the way, equally free of excitotoxins.  An increase in exercise also tends to assist sufferers.  This could be due to toxin expulsion through the sweat glands, or the way the body regulates blood sugar during exercise.  Make note that exercise is the only way to flush toxins from the lymph nodes, which could also play a factor.  One should never do ﻿strenuous exercise following monosodium glutamate intake, for MSG is known to cause sudden heart failures in exhausted people who have magnesium deficiencies.  Most people have a magnesium deficiency, because they do not eat their vegetables, especially the vegetables that are highest in magnesium, such as spinach, kale and broccoli.

Magnesium has been shown to be very helpful in those suffering with this condition.  An excess of magnesium causes other minerals to flush out of the body, so we recommend against taking magnesium supplements,  It is usually difficult to get good magnesium supplements, so we recommend that fibromyalgia sufferers increase their intake of nuts (especially cashews and walnuts), and green leafy vegetables.  Raw baby spinach is always your friend, and it contains more nutrients than regular spinach does.  Conversely, monosodium glutamate inhibits the absorption of magnesium.

Magnesium is the dirty little secret about how "aspirin prevents heart attacks".  Aspirin contains magnesium, but it is not as good as dietary magnesium.  You see, while the magnesium in aspirin can indeed help prevent heart attacks, taking aspirin regularly also increases one's chance of having strokes in almost the same proportion, due to its thinning of the blood.  So our advice is to take two handfuls of baby spinach, and call us in the morning.

The lax labeling requirements in the U.S. make it difficult for Americans to know what they're eating, and this is intentional.  Informed consumers are bad for the bio-technology and chemical industries.  However, the avoidance of artificial sweeteners is not really difficult.  Avoid 'diet' or 'sugar-free' foods as a general rule, and read ingredient labels for Aspartame (Nutrasweet), Saccharin (Sweet 'n' Low), and Sucrolose (Splenda).

Avoiding processed foods will generally keep a person safe from these substances.  We strongly recommend that those who are exhibiting the symptoms of fibromyalgia switch to a natural diet, with wholesome, homemade meals.  Keep careful track of which foods cause flare-ups, and eliminate unnecessary medications.  Never stop using antidepressants abruptly, because they are addictive, and their withdrawal symptoms can be severe.

We have archived a copy of the F.D.A. page, because such web pages have a habit of disappearing after we write about them.  The Health Wyze Report obviously has some regular readers inside the Food and Drug Administration.  Perhaps we have helped some of them with their own health issues.  Amazingly, this site is quiet popular with doctors too.

Here is an archived copy of the letter to the F.D.A., for when it disappears.