We have previously covered the sale of soy products at Whole Foods Market, along with their blatant promotions of canola oil. Nevertheless, we had hoped that there was merely somebody high-up within Whole Foods who was still buying into that whole "soy is a health food" scam, and thus, they were simply ignorant of the last 10 years of scientific findings. Yet on a recent trip to Whole Foods, we inspected only a handful of products, and discovered the use of autolyzed yeast extract. It was quite a disappointment. 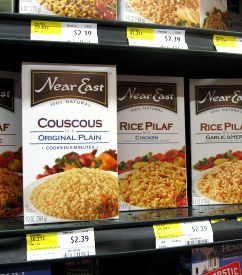 The Whole Foods Market wall of shame. A main ingredient of their rice is MSG, which is second only to the rice itself.

We found an entire section of couscous rices, from a company named, Near East. The vast majority of those products contained autolyzed yeast extract, usually as the second ingredient (after rice). Even more disgusting, is that these products are labeled, "100% Natural". Of course, by the Food and Drug Administration's definition (there is none), high fructose corn syrup can be labeled 'natural' too. After all, it was derived from corn long before it was re-engineered at various chemical factories using sulfuric acid. It's prudent at this point to note that Whole Foods is now selling products which contain high fructose corn syrup too. They are increasing their inventory of "natural" foods, that is.

For those who have missed our previous articles about monosodium glutamate, autolyzed yeast extract is in large part, free glutamic acid. "Free" glutamic acid is glutamate which has been extracted from proteins using manufacturing processes such as fermentation (induced rotting). This is done with genetically engineered bacteria. Glutamate is the active component of MSG that causes people to experience migraines, seizures, and sudden heart attacks; just to name a few. For comprehensive details about the dangers and hidden names of monosodium glutamate, we encourage people to read our previous article, How MSG (Monosodium Glutamate) Is Hidden In Your Foods and Its Antidote, Taurine.

We considered reporting our findings to Whole Foods, until we realized that they actually have no problems with autolyzed yeast being inside their foods. They list it as an "acceptable flavor enhancer", yet they have banned monosodium glutamate. You know, since they're so concerned about the health of their customers.

MSG has a well-known reputation among the health-conscious, but autolyzed yeast is not so infamous. At least not yet, but we are trying to change that. People do not know that these are essentially the same thing, and this ignorance is what allows companies like Whole Foods Market to deceive its own customers. Most people have never heard of autolyzed yeast extract, and that's why it remains on the shelves.

It's Not A Health Problem. It's Just A Public Relations Problem.

Whole Foods has already had a public relations campaign to try and calm peoples' fears about this substance, whilst "moderating" comments about this topic at its own site. That's much easier than removing it from shelves, apparently. From the commentary section of their official corporate website, one could make the conclusion that no person has ever commented about this issue, as if Whole Food's customers are never concerned about MSG. We think not. Funny how such things never get publicly displayed.

"Autolyzed yeast and hydrolyzed proteins, among other ingredients, are completely natural ingredients that happen to be have substantial amounts of glutamates, but nowhere near the concentration found in MSG."

The Whole Foods definition of 'natural' conveniently differs greatly from that of most reasonable people. Having a natural ingredient in the beginning of a manufacturing process does not necessarily result in a natural output. In the case of autolyzed yeast, it is not natural, and it is not safe. Unlike the truly natural form of glutamate, manufactured free glutamic acid provides both L-glutamic acid and D-glutamic acid, and sometimes accompanies carcinogenic by-products such as mono and dichloro propanols. Naturally occurring glutamate (organic L-glutamic acid) that is found in all proteins, has never been shown to yield negative reactions in MSG-sensitive people, nor does it contain toxic industrial by-products, or D-glutamic acid.

The truth of the matter is that the glutamic acid found in unprocessed, unadulterated, and/or unfermented food and in the human body is composed of one form of a single amino acid, L-glutamic acid, and nothing else.

Despite attempts by Whole Foods Market and other large corporations to try and convince the world that chemically produced autolyzed yeast is natural, safe, and identical to the natural amino acid, scientific data proves otherwise. This article is another unfortunate reminder that people must read the ingredients labels, and make decisions based upon them, and never base their decisions upon marketing, or trust in any corporation.

Whole Foods is also currently selling brownies and other sweet products with a "sugar free" label. The sugar substitute is frequently maltitol, a sugar-based alcohol. Maltitol raises blood sugar almost as much as bleached, refined sugar, despite the 'sugar-free' implication that it is safe for diabetics. No reasonable person would assume that a sugar substitute would have all of the same effects as regular sugar. In fact, the two are almost identical, though maltitol has a tendency to also cause painful intestinal cramps and diarrhea. We recommend that people avoid maltitol to the same (or greater) degree that they avoid regular processed sugars.

Whole Foods Market appears to be gradually decreasing their standards in regards to natural and organic foods, so it is more important than ever that you take responsibility for your own health; instead of relying on others to make decisions on your behalf.