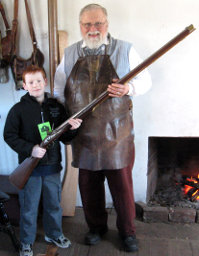 The Moravians, a Protestant sect who came to America from Germany, have a living museum in Winston-Salem comprising several streets.  They have homes and business buildings that date back hundreds of years, replete with ladies and tradesmen playing the roles of their contemporaries from centuries past.  This place is called Old Salem.  It is like a small scale version of Colonial Williamsburg.  Walking about Old Salem, one would almost expect to see George Washington riding his steed, or an invading army of Red Coats.

We enjoyed our visit, and stumbled over some interesting facts that are worthy of being reported to our readers.  There were also a few history lessons about how much history has been corrupted by powerful industries, even amongst the historians.

We knew it was a bad sign when the supposedly revolutionary era kitchens had white flour.  The Old Salem Staff really believed that it was a food of our distant forefathers.  Bleached white flour was invented by the chemical industry in the twentieth century.  Likewise, brown sugar was featured on the tables.  Nobody really seems to know when it truely came into being, but it too is a product of the industrial period.  Brown sugar is an unnatural product of the modern chemical industry, and likewise, white flour is typically produced with chlorine bleach to make it white.  We are willing to bet that George Washington never bleached his tights with Chlorox, and he never tasted white bread either.  Despite Washington's honey-loving sweet-tooth, he and his peers had very little risk of diabetes or cancer either.

By the way, it is worth mentioning that there are safer white flours now, which are bleached using hydrogen peroxide (oxygen) instead of chlorine, but either way, the modern chemo-pharmaceutical industry is involved in the manufacturing.

How History Has Been Doctored:  The Doctor's House 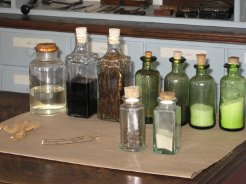 The most eye opening experience of revised history was in the colonial doctor's house, where the fallacies of traditional medicines were explained to us.  Apparently, the traditional medicines of yesteryear are a laughing matter that can hardly be compared to the advances of modern "scientific medicine".  When it got started, I found myself wondering if Sarah would need some Valerian to sedate her.  The historian informed us that medicine is not dangerous and unscientific anymore.  As an example, she noted that poisonous compounds such as mercury and arsenic are no longer given to patients.  It took great restraint not to shout-down this young lady about the verified ingredients of chemotherapy and typical vaccines.  We so wanted to explain to the crowd (and her) that these ingredients are indeed being used now on infants, and about how "modern scientific medicine" is routinely using new compounds that are even more poisonous.  For our historian, the fact that the doctor had an electro-shock (electrocution) device clearly showed the progression of medicine over the primitive use of herbs.  I still have the bite marks on my tongue.  For a person to be so confused about traditional medicines and medical history almost certainly means that she attended a typical medical school.  Perhaps she's paying her way through pharmacy school.

Of course, she did not really speak of herbs.  It was "erbs".  All of the experts use the word "erbs".   Eventually, her pharmaceutically-friendly, rewritten version of medical history became almost unbearable for us.  We even heard about "camomile" instead of chamomile too.  Maybe we should do the same with the new and experimental medicines.  How about calling them "harmaceuticals"?  That does seem more appropriate, now that I think about it.

What the historian failed to realize, because of her excessive brainwashing, is that the older style of medicine was actually more scientific than the medicine of today.  Science is the methodology of cataloging and understanding cause and effect.  Take for an example, if autism rates always increase in direct proportion to the amount of mercury-laced vaccines given, then there is a clear cause and effect relationship between mercury and autism.  Therefore, science unequivocally tells us that autism is caused by neurotoxins, such as mercury.   Perhaps this example is a gross oversimplification, but it makes the point.

True science should not be confused with the F.D.A. science of the drug industry, whose studies are tampered with to match whatever happens to be the most profitable, or create the most drug dependence.  The use of modern harmaceuticals is certainly not scientific, because they never actually do what they are supposed to do, and thus they have an inverse cause and effect relationship.  Examples of this inverse (perverse) science include how diabetes drugs make diabetes worse, how heart medications destroy the cardiovascular system, and cancer medications are the most toxic substances known to mankind, even though cancer itself is a toxicity disease.  Therefore, science tells us that the modern harmaceutial industry is about neither healing or curing.  Moreover, modern doctors obediently practice "medicine" as they are told to, whilst completely ignoring the cause and effect relationships of what they do with their poisons.  That's not science.  It's just big business, that often involves murdering its own customers.

If we let science be our guide (basing our choices on the facts of verifiable and repeatable cause and effect relationships) then the ancient practice of blood-letting was safer, more effective, and more scientific than either chemotherapy or open heart surgery.  American readers may recall that Washington was killed during a blood-letting, but this was a rare thing, for death by physician was a rare occurance in those days.  Death by doctor was hardly the fifth leading cause of death back then (and it is actually much worse than is admitted in the official statistics).

We discovered that the diet of the colonial Moravians leaned heavily on butter, sweets, teas, honey, and berries.  With these foods and their primitive "erbal" medicines, they somehow managed an average life span of 95 years.  Just imagine how much longer they would have lived if only they had the advancements of chemically bleached foods and harmaceuticals.  Well... maybe not.