F.D.A. Involved In The Biggest Recall Ever -- MSG That Contains Salmonella 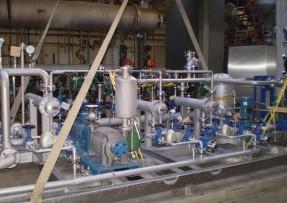 This is actual equipment that is used by Basic Food Flavors Inc. to chemically engineer our foods. Take a hard look. Click image to enlarge.

The F.D.A. has just begun what may be the largest recall in history. They are recalling hydrolyzed vegetable protein (H.V.P.), a 'flavor enhancer' that can be found in thousands of processed foods. The chemical is similar to MSG, as it contains large amounts of free glutamic acid; and right now, it is contaminated with salmonella.  Salmonella is usually only found inside animal and human feces, but the source of the H.V.P. contamination has not been disclosed to the public. The Food and Drug Administration has so far refused to comment on whether the facility in question has ever been inspected, or if the facility has a known history of poor sanitation. As usual, their priority is shielding their chemical industry partners from the public that they pretend to serve.

The contamination initially occurred in a batch of H.V.P. supplied by a company named Basic Food Flavors. Each company that uses H.V.P. is now trying to trace their products back to Basic Food Flavors, but the process could take months.  You did catch that, right?  The food processors don't even know where the ingredients come from that they are placing in our foods! In the meantime, thousands of Americans will become deathly ill for reasons that are unknown to them. Salmonella can be extremely harmful, and even fatal in children, the elderly, and those with weakened immune systems (most people nowadays).

Basic Food Flavors has shipped this tainted chemical throughout North America. The Canadian Food Inspection Agency is now warning Canadians that H.V.P. does not even have to be listed on ingredient labels. Just like in the United States, chemicals can be hidden under names like 'spice', so people often do not know what they are really eating, and much of this is intentional.  In other words, 'spices' do not usually mean spices.  They call this "approved labeling", but we call it lying.  Those who eat processed foods are routinely deceived regarding what they eat; and this deception is typically legally sanctioned, thanks to the chemical industry's cozy relationship with governmental regulators.

While spreads, dips, and especially mayonnaise products are currently getting the most F.D.A. press releases for corporate damage control, 1.7 million pounds of ready-to-eat meat is now being recalled.  As such, we recommend that now, more than ever, for people to avoid processed foods and restaurants (especially large restaurant chains).  Really folks, this is important. You could pay dearly for that naughty indulgence.

The photo was taken at Basic Food Flavors Inc., of a factory machine that produces our "foods". Our photo is much more revealing than the pictures of old-fashioned family farmers they place on their processed meat and dip packages.  The image really does speak for itself.  Do you suppose that their workers wear astronaut-like environmental protection suits to make the "food"?  Look above at the picture for the answer as to why chronic diseases are normal in modern America.

# Robert Ferguson 2010-03-12 21:57
I'm not sure if I'd eat anything coming out of that machine, but it sure looks like it could make some awesome moonshine. Seriously, it is like sometimes you just don't really want to know. We're trying to take better care of ourselves now. Every story like this makes it just that much easier to say no to the boxed-up convenience foods. You have to wonder if they feed this stuff to their own families.
Reply | Reply with quote | Quote

# Nancy Helman 2010-03-14 04:28
Is that picture for real? I used to feed my kids on a lot of processed foods, and it makes me feel bad that it came from machines that look like that. I think my neighbors kid was recently diagnosed with autism, and i was wondering if theres anything that can be done with herbs,etc to help him?
Reply | Reply with quote | Quote

# Sarah C. Corriher (H.W. Researcher) 2010-03-14 18:23
You actually have really good timing. We're currently writing an article on the topic of autism, and we should be posting it really soon. Be sure to check back!
Reply | Reply with quote | Quote

# "Natural" Parmesan Cheese — Jonathan Scott 2016-11-16 19:23
For a few months now, I have been using 4C Parmesan cheese when having pasta. I went to the store to buy more of the cheese, there was a note stating the cheese has been voluntarily recalled. I went online and found an FDA Post stating a possible salmonella contamination some 4C and Cento products. This is truly disgusting. The post noted that there have been no known illnesses reported by buyers who have consumed these products. I noticed that your article on this matter was dated in 2010. The FDA warning for the cheese was posted yesterday! (November 15, 2016) Six years later and this us still going on. Truly sad.......and frankly business as usual courtesy of the FDA.
Reply | Reply with quote | Quote
Refresh comments list