A Testament To Organic Foods 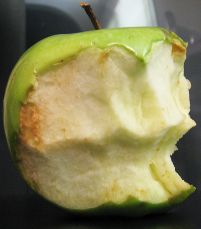 We recently had trouble finding organic apples, so we subsequently bought conventionally-grown apples at Walmart.  We washed the apples, in an attempt to remove any pesticide residue that remained on the exterior.  However, when biting into my most recent apple, it was immediately obvious that something was terribly wrong.  I tried to eat the apple, but struggled against its bizarre taste.  I could not do it.  Despite having been exposed to my mouth bacteria, and after sitting out exposed to air at room temperature all night, there was still virtually no browning at all.  The photos for this article were taken 15 hours after the attempt to eat it.  It is like the apple from Snow White and The Seven Dwarfs.  The texture of the apple was strange too, and closer to that of a rubber ball than an apple.  Perhaps we needed a reminder of the importance of buying organic.  Despite the bogus studies which say that there is no difference between organic and chemical-ridden foods, we can clearly see it here. 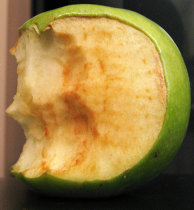 The other side of the apple, however, did brown slightly.  That side was cut with a knife, and the unusual chemicals in the apple must have had some kind of chemical reaction with the knife.  It is still not as brown as it should be, after such a lengthy amount of time, but the difference between the two sides is significant.  We have no way of knowing what happened to this conventionally grown apple.  This effect could have been caused by the new generation of pesticides that are applied to roots for total plant absorption, a chemical spray prior to being bagged, or it may even be a mislabeled genetically modified apple.  In any case, it reminds us of the famous Super Size Me movie, in which McDonalds burgers were left at room temperature for months without ever changing.

Foods that are truly natural always rot quickly.  Rotting is actually a good sign about the nutritional properties of a food, and proof that it is non-toxic, since it does not kill the pathogens necessary for rotting.  The fact that this did not rot was a frightening warning to us.  Perhaps it would be wise to do such experiments on your own produce, from time to time, and let retailers know that this type of 'food' is unacceptable.