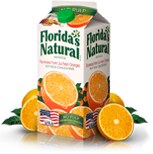 The F.D.A. has temporarily stalled the importation of orange juice, but contaminated orange juice is still on U.S. store shelves and in people's homes.  None of the poisoned orange juice is being recalled.  The same is likely true for Canadian supplies.

The F.D.A. was not even responsible for the discovery of the poison.  The Coca Cola company, which produces Minute Maid, detected it in their own products and notified the F.D.A..  By not demanding a recall, the F.D.A. is providing immunity to Coca Cola from any damage that occurs as a result of this poison being in their products.  Legally shielding companies in this manner is the primary function of the F.D.A., as evidenced by its policies.

B.P.A. Is In Metal Food Containers Too, Because It Was Intentionally Put There - To Make Them "Safe"