Several Coca Cola bottling plants in India have been found disregarding environmental regulations. The incidents which caught my immediate attention involved several Coca Cola plants draining water from deep wells, which has left the native people of several Indian communities very little water for themselves. Many of their scarce water sources are already dried up, or terribly polluted, and the Coca Cola plants have completely ignored the grievances of the increasingly desperate Indian communities. Coca Cola uses their water for profit, while the native people suffer the consequences of this multi-national corporation. The Indian Resource center reported:

"A significant example of such egregious behavior comes from the Coca-Cola company, which has continued to extract millions of liters of water everyday in India while communities who reside around its bottling plants are left thirsting for water." 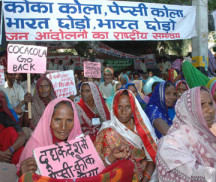 I do not believe that anyone would deny that water is one of the most fundamental human rights, and life is not possible without it. Fortunately, life is possible without Coke. Many corporations are unethical, but this is at a new level of evil. To deny people their own water for the sake of greed is inhumane. Many universities in the US, Canada, and the UK have removed Coca Cola products in order to send a message to the corporation, but little has changed. Legal action against Coca Cola in India is currently underway, and while I hope the plants are eventually shut down; it would be virtually impossible for anybody to sue them into bankruptcy.

One plant dumped hazardous industrial waste all around their premises, whilst never explaining what these chemicals were, or how much was being generated. The Coca Cola plant representatives contend that their company is not breaking any laws, and therefore, does not need to change its practices. As shown in the images, the Indian people disagree. Coke is moving to India to bypass pesky annoyances such as the EPA, and by the way, India is also a place where politicians can be bought much more cheaply. That's a win-win for Coca Cola.

"The violent suppression of the march and rally in Mehdiganj is not new -- protesters were violently attacked in September 2003 by armed police. Other struggles against Coca-Cola in India are also increasingly being met with violent suppression. 'While shocking, the violent attack on the peaceful demonstration against Coca-Cola is not surprising. Coca-Cola operates with impunity, and violence is an inherent part of how Coca-Cola does business the world over,' said Amit Srivastava of the India Resource Center who was also at the rally. Srivastava was referring to the international campaign to hold Coca-Cola accountable, in which Indian [locals strugglings to challenge] Coca-Cola's abusive practices have joined forces with the Colombian union, Sinaltrainal, to hold Coca-Cola accountable. The United Steelworkers of America, on behalf of Sinaltrainal, have filed a lawsuit in the United States charging Coca-Cola with complicity in the murder, torture and intimidation of trade union organizers at Coca-Cola bottling facilities."

I found that the Coke utilizes 283 billion liters (74 billion gallons) of water per year, and the Coca Cola company proudly boasts that it has a water use ratio of 2.7 to 1. That is, for every 2.7 liters of water (fresh water) it takes from wells, it produces 1 liter of product. What happens to the remaining 1.7 liters (or 63%) of the water? It is used to clean bottles and machinery, and is discarded as waste water. This waste water is then discharged into surrounding agricultural fields and a canal that feeds into the river Ganges. For some reason, they do not see this as ethically questionable. 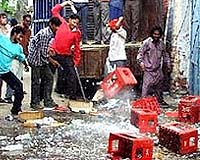 Pictured left is a group of Indians showing their true feelings for the Coca Cola corporation. I drank Coke regularly in the past, but that was before I began to really care about my health. I never paid attention to the way I felt after consuming chemicals during my younger years. I never knew that pesticides can be readily detected inside many soft drinks, including Coca-Cola. With my onset of pre-diabetes, it became obvious the damage that Coca Cola had done to my body, and what continued usage of it would do to me. I have also recently realized that avoiding Coca Cola is necessary as a matter of conscience. I believed for quite some time that Coca Cola was a far better company than Pepsi ethically; that is, until I learned about what they are doing to India.