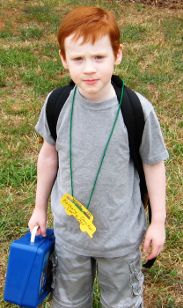 Our youngest team member, Zachary Corriher, during his 2-week stint in a public school.

Parents choose to home school for different reasons.  The reason is most commonly a need to provide moral instruction to their children, followed by a concern about public school environments.  In increasing numbers, parents are home schooling their children to evade state interference in the raising of their children, and to avoid the demands by school systems that their children be placed on anti-depressants, or other drugs that effect their minds.

Teachers have become the doctors in many schools, immediately making an A.D.D. diagnosis for any child who is defiant, disruptive, or who has difficulty focusing.  Then the teacher, with the full backing of the school, will direct the parents to a specific school-friendly doctor who is known for prescribing drugs after these referrals.  When parents refuse to comply, then the school systems often threaten to contact social services about the parents' purported "abusive medical neglect".  Of course, in reality, it is the schools which are abusing children in these cases, by denying them their basic human rights to be individuals without forced psychiatric medications.

Sending a child to an environment in which he is labeled as being 'sick' whenever he shows any signs of individuality is bound to result in long-term emotional problems for the child.  Parental refusal to medicate children usually results in constant harassment by teachers.  A recommendation for drugging is made when a child is too quiet (needs antidepressants), too loud (A.D.D. drugs), defiant (anti-anxiety drugs), has difficulty concentrating (A.D.D. drugs), or is impulsive (A.D.D. drugs).  However, no testing is ever done on these children before the diagnosis and drugs are provided.  It remains evident that these 'symptoms' are present in completely normal children; but nonetheless, the creative children with leadership abilities are a constant inconvenience for teachers who are fixated upon power and control.

There are plenty of parents out there who spend a lot of time considering home schooling, but always waiting until next year to make the leap.  In some cases, this is delayed forever.  One of the most common reasons is that parents worry about the costs involved.  However, home schooling can be free, especially for younger children.  The only pricing involved is that of books, and if you perservere, you can sometimes get those for free, too.  Compare this with the cost of moral degradation of children, forced prescriptions and constant battles with the school system.

In recent times, home schooling has become far more accepted, but that has not always been the case.  There were times when home schooling was seen as the lower-class option, and one in which children get a lower quality of education.  In some areas, this stigma continues.

Most parents who teach their children at home do not have degrees in education, and their children are not usually on medications to correct their behavior.  This has resulted in home schoolers doing significantly better than their public school counterparts.  The home environment is far more conductive to learning, and that was evidenced by this study.  The study also showed that the certifications of parents was fairly insignificant, but those who had no certification actually did slightly better than those who did:

Thus, many of the fears that accompany home schooling are not grounded in reality.  Teaching children is not difficult, and surpassing the public school system is so easy that we have to believe the system is broken by design.  The elite upper classes who make the policies do not want the masses to be well-educated, able to think for themselves, or to be independent.  Therefore, it is our obligation make sure that the children understand what real freedom is, and how it must be preserved.

We wrote this article because we believe in the rights of parents, and the family unit.  We also know the dangers of the psychogenic drugs that are prescribed to children at dizzying rates.  As such, we hope to do our part to protect them.  Children are the future, and it is for that reason that the public school systems are being used to teach kids to conform, obey, and to never question authority, and thereby never question the current power structure.  America's freedom depends on the knowledge of its citizens, and if the public educational system continues down its current path, a bleak destination awaits us.

Children are intentionally not being taught about America's Christian heritage, nor are they educated in basic skills as well as their forefathers.  The drugs that they are given dull the emotions, and cause them to become blindly obedient.  After all, conscience (an emotion) is what allows us to make decisions based on whatever morally governs us.

Home schooling is always one of the first freedoms to be taken away in socialist and fascist societies, because such families cannot be manipulated by the state.  Home schoolers in Germany are still suffering from the laws which were made during the fascist regime of Adolf Hitler, and Brazilians are now suffering with similar persecution.  In the United States, there are periodic threats to homeschooling, but the Homeschool Legal Defense Association does a fantastic job of fighting for the rights of people to home school their children.

The Utter Corruption Of The School System...(Our Personal Story)

Only In England: Mandating That School Children Have Sex At Least Once A Day

The Texas State Board of Education's Attack on The United States, Our Creator, and How It All Got Started