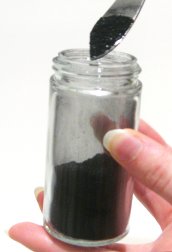 In 1831, in front of his distinguished colleagues at the French Academy of Medicine, Professor Touery drank a deadly cocktail of strychnine and lived to tell the tale. He had combined the deadly poison with activated charcoal. It demonstrated how powerful activated charcoal is as an emergency decontaminant. Activated charcoal is still the most potent and rapid-acting general detoxification agent available.

We witnessed the saving power of activated charcoal ourselves, when one member of our household experienced a severe allergic reaction to an unknown ingredient from a restaurant. We orally administered two teaspoons of dampened activated charcoal powder, followed by a glass of water. The allergic reaction began subsiding rapidly, and completely dissipated within thirty minutes. Activated carbon may have saved our patient from a visit to a hospital, an injection of steroids (and only God knows what else), a stomach pump, and possibly the need for the victim to remain in the hospital for several days.

The best and cheapest option for obtaining quality activated carbon is to powder aquarium filtration charcoal with a mortar and pestle. Aquarium charcoal has the same purpose for aquarium water: to extract various toxins from the water, including organic wastes. It is also found in some pharmacies. Regardless of where it is obtained, it should be powdered before it is stored, and dampened when used. It should be stored in an air-tight container, because it will absorb impurities from the air. Swallowing it damp prevents the powder from being inhaled into the lungs, where it could become dangerous. A glass of water should be consumed immediately afterward.

Risks: Charcoal significantly decreases a body's absorption of all nutrients and medications. Because of this, frequent use of it is strongly discouraged. Activated charcoal may also cause abdominal pain or swelling in rare cases. If this occurs, contact a doctor immediately, since this could be an indication of intestinal bleeding or blockage. For mild cases of charcoal-induced constipation, a person may self-treat with a hemp fiber supplement.

Note: Charcoal briquettes like those used for outdoor grilling should never be used to make medical activated charcoal, and no part of them should ever be ingested.

Emergencies: If you have a poisoning emergency and you live in the United States, then you should call the U.S. Poison Control at (800) 222-1222.

Quick Tip: How To Cure A Hangover

How To Quickly Remedy Food Poisoning