Catherine Bennett
As a reporter for The Guardian, she is courageously defending society from "vaccine dodgers" and alternative medicine.

In the British mainstream media, there has been enormous grandstanding about making the M.M.R. (Measles, Mumps, and Rubella) vaccine mandatory. Vaccinations have never been mandatory in Britain, because the English never believed that forced drugging was moral for a civilized society. This is one of the reasons why water has never been fluoridated in the United Kingdom.

One of our readers sent an article our way, entitled "It's time we created special schools for MMR dodgers" by Miss Bennett. That article was an expression of a media agenda to associate those who forgo vaccines with cowards and traitors, instead of the better-educated people that they are. Throughout the Guardian's article, insults are piled upon those who have dared to question the wisdom of vaccines, and it was insinuated that society would surely suffer a calamitous failure without more vaccinations.

Bennett's bigoted article provided the revolutionary idea of separating unvaccinated children into quarantine schools for the protection of respectable society. Perhaps society should indeed separate the toxic, dumbed-down, pacified, and obedient families from the unpoisoned, healthy, vibrant, and creative ones; who are better poised to provide society with leadership. Families would be pleased to send their children to these special schools knowing that their children would be surrounded by healthier peers, whose parents were equally well-enough educated to act independently, in the best interest of their families. Such parents would rest easier knowing that the risk of school violence would be extremely low, due to the unlikelihood of any of the children having been given violence-inducing S.S.R.I. anti-depressants, which by the way, have been involved in every school massacre in history. Parents could feel safer sending their kids to school if they were not going to be around kids who emit radiation due to cancer treatments. With this sort of school segregation, we could more easily test which kids score higher in tests, who gets sick the most often, and eventually; which ones are the most successful in the long term. We are able to predict which category of kids would grow up with the best capability to become the leaders of society, and which ones would simply become the drones to be forever condemned to a life of serfdom.

Attempting to provide evidence of the dangers of unvaccinated people, Bennett's article referenced a seventeen-year-old boy who died of measles a year prior. Even with the resources of her major publication at her disposal, she still found only a single death amongst the unvaccinated. She neglected to mention how many more people were killed by lightning or meteors. Of course, she also never mentioned how many vaccinated people died of measles that year. Most of the British who catch measles actually get it from the measles vaccination.

The reporter's arguments ignored the fact that the six studies that are routinely cited to promote vaccinations already have well-documented conflicts of interest. All of them were clearly shown to have a high risk of bias by Cochrane's scoring system. Bennett then boldly accused the famous study by Dr. Andrew Wakefield (the first to confirm the M.M.R. vaccine-autism link) of being flawed by a conflict of interest. There are many party-line studies in the U.S.A. and Canada, in which a verifiable collusion with the vaccine manufacturers was ignored, in lieu of assaulting Wakefield's professionalism. The dozens of self-serving studies made by the pharmaceutical industry happened long before the paradigm-shifting study by Wakefield ever made the news. Dr. Wakefield published his findings at great risk to himself and his career.

Below are findings from scientists and researchers concerning the six major pharmaceutically-sponsored pro-vaccine studies:

"The study demonstrates the difficulties of drawing inferences in the absence of a non-exposed population or a clearly defined causal hypothesis." (Taylor 1999)

"The number and possible impact of biases in this study was so high that interpretation of the results is impossible." (Fombonne 2001)

"The Retrospective Person-Time Cohort Study, by Makela, assessed the association between exposure to MMR and encephalitis (EN) aseptic meningitis (AM) and autism (AU) in a cohort of 535,544 Finnish children (95% of the surveillance cohort); the children were aged one to seven years at the time of vaccinations. The authors compared the incidence of disease in the first three months after vaccination with the incidence in the following months and years. They concluded that there was no evidence that vaccines had provided successful inoculation. The study was weakened by the loss of 14% of the original birth cohort, and the effects of the rather long time frame of follow up. What the impact of either of these factors was in terms of confounders is open to debate, however the long follow-up for autism was due to the lack of a properly constructed causal hypothesis..." (Makela 2002)

"The interpretation of the study by Madsen was made difficult by the unequal length of follow-ups for younger cohort members, as well as the use of the date of diagnosis rather than onset of symptoms of autism." (Madsen 2002)

"The conclusion, however, implied bias in the enrollment of cases which may not be representative of the rest of the autistic population of the city of Atlanta, USA where the study was set." (DeStefano 2004)

"In the GPRD-based studies, (Black 2003, Smeeth 2004) the precise nature of controlled unexposed to MMR and their ability to generalize was impossible to determine... The study (Smeeth 2004) appeared carefully conducted and well reported, however, the GPRD-based MMR studies had no unexposed (to MMR) representative controls. In this study the approximately 4% to 13% seemed to be unexposed controls regarded by the authors as representative. Such a small number may indicate some bias in the selection of controls." (Smeeth 2004)

The drug company that makes the M.M.R. vaccine (Merck) publishes an extensive list of warnings, contraindications, and adverse reactions associated with this triple shot. It may be found in the vaccine package insert that is given to doctors administering MMR, and inside the Physician's Desk Reference (PDR)(8,9). However, this information is never given to patients or parents. The original M.M.R. insert is quoted immediately below.

An Excerpt from the Original M.M.R. Drug Insert

The M.M.R. vaccine manufacturer has begun censoring autism from the package insert for its second version of the M.M.R. vaccine ("M.M.R. 2"). Most of the above indications continue to be cited, except for the admission of an autism link, which has been selectively removed. The vaccine manufacturer previously admitted to causing autism, but only in private communications with doctors. Their statements to the public and the media have always been the complete opposite.

Parents in the British medical system are often ignored when they report problems with vaccines, because the doctors act as the gatekeepers. Parents cannot directly report bad reactions to regulators. They must instead go through their doctor, who may refuse, as a matter of protecting himself. Keep in mind that doctors in Britain get monetary bonuses for administering vaccines, which could be considered a conflict of interest.

Examine the following graphs showing the incidence of disease deaths relative to when the vaccinations for those diseases appeared. 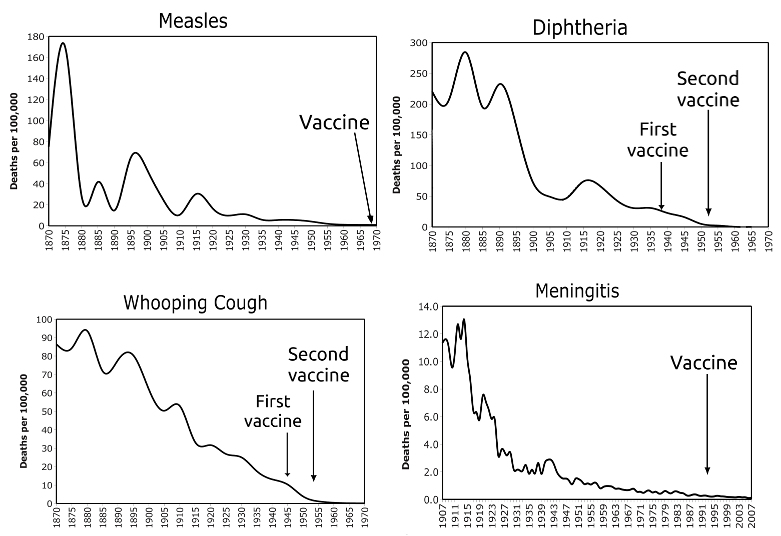 The vaccine graphs (above) were provided by Greg Beattie, author of, Vaccination: A Parent's Dilemma. Data for the meningitis graph was obtained from the Australian Institute for Health and Welfare's book, General Record of Incidence of Mortality. Data for the whooping cough, diphtheria, and measles graphs was extracted from, The History of Diphtheria, Scarlet Fever, Measles, and Whooping Cough in Australia, by J.H.L. Cumpston in 1927, and Australian Bureau of Statistics population data. Australian information was used because such embarassing statistical data is not as freely available in the United States.

There is a somewhat inverse relationship in the graphs above. Notice that when the vaccines were implemented that the decreases in disease deaths actually slowed? This means that the vaccinations helped to perpetuate the continuation of the outbreaks. More importantly, the information shows that all of the vaccines were withheld from the public until herd immunity had been reached, so that the vaccines could be presented as having eliminated the epidemics. In fact, there is very little data proving that they did anything, since herd immunity had been reached.

This will hopefully end some of the delusions that the allopathic establishment has had great scientific breakthroughs which brought about an end to diseases. Measles deaths declined 99.5% before vaccinations, so was it really the vaccine that saved us? Such numbers steer us to ponder if policy makers have been trying to recreate the measles epidemic by injecting the live virus into people at a time when they do not need it. Vaccines should be classified amongst the most toxic and dangerous medicine ever known.

It's time we created special schools for MMR dodgers, The Guardian