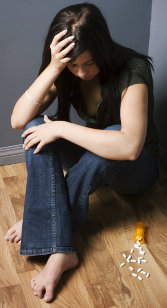 All S.S.R.I. anti-depressant drugs feature fluoride as a main ingredient, so these psychiatric drugs dramatically contribute to thyroid disorders, and they are the primary cause of hypothyroidism in some cases. S.S.R.I. drugs are notorious for causing nutritional deficiencies, due to their overall toxicity, and because they dramatically disrupt the serotonin that is used for digestion. Contrary to the dishonest drug company marketing, only 10% of an individual's serotonin is used by his brain, while about 80% of it is used by his digestive system. Without the proper nutrients, hypothyroidism cannot be cured, because those nutrients are needed to balance the hormones and to strengthen the thyroid. S.S.R.I. drugs furthermore reduce usable calcium in the body, and thereby render magnesium unusable; since magnesium and calcium are interdependent. Magnesium deficiencies are rife in modern society because people do not eat enough green leafy vegetables. A severe magnesium deficiency can lead to sudden heart attacks, and lesser deficiencies cause heart attacks when monosodium glutamate (MSG) is consumed. People who have hypothyroidism are much more likely to have heart problems, because the hormones that are produced by a healthy thyroid help to strengthen heart contractions and regulate heart rhythm.

The medical establishment prescribes synthetic hormone pills to hypothyroidism patients, and patients must continue taking them for the rest of their lives. This is because these artificial hormones cause a body to stop producing its own thyroid hormones permanently; similar to what is experienced with diabetics taking synthetic insulins. In both cases, the result is perpetual customers who will forever be reliant on the system, because the medications destroy the organ that they supposedly help. Be forewarned that there is no cure with orthodox therapies, and there may be no turning back.

The medical establishment's tests for hypothyroidism are unreliable, so multiple consecutive tests may produce differing results. As a result, some people are drugged for the rest of their lives for a disease that they did not actually have, until they began the drug regimen. Those who are given the pharmaceutical hormones develop hypothyroidism that is much more difficult to cure than those who did nothing at all, or those who turned to the alternatives immediately.

In the 1890's, the original conventional medicine (what is now alternative medicine) began using all-natural hormones to treat hypothyroidism. These natural hormones were extracted from animal sources. In 1958, the chemical industry first began producing the completely synthetic versions of the hormones, which were marketed as being identical to the natural hormones that had been used for decades. Soon thereafter, the F.D.A. began playing a political game to suppress the use of the significantly safer, animal-based hormones for no other reason than increasing industry profits. Behind its corrupt shenanigans was the fact that chemical formulations can be patented, but natural hormones cannot. It avoided a political backlash by not officially banning the natural hormones, but it nevertheless accomplished the same goal by re-categorizing natural hormone treatments as "not approved" therapies. Thus, a doctor risks his medical license, and increases his lawsuit risk if he prescribes the natural hormones. It is another example of the F.D.A. eliminating competition for its top pharmaceutical partners using cunning methods. Treating hypothyroidism has become much more expensive and dangerous as a result. The new synthetic hormones are addictive to the extreme, as only chemistry can provide. It follows the same addictive pattern seen with cholesterol medications, hypertension medications, diabetes medications, cancer treatments, anti-depressants, and pharmaceutical record-holders like Heroin (from Bayer). The chemical industry's synthetic hormones cause both heart disease and cancers, but they help to cover a doctor's assets.

How To Cure Hypothyroidism

In alternative medicine, there is very little difference in the curing of hypothyroidism and hyperthyroidism. This is because the treatments involve assisting the thyroid to heal, in either case. Curing thyroid disease requires a long-term commitment for a period of at least a year. Creating this problem took years of self-poisoning, so fixing it is neither quick, nor easy. Hypothyroidism medications are addictive, and the body becomes reliant on them, which is why the mainstream establishment maintains that people must take them forever. Those who have been taking hypothyroidism medications for years must slowly wean themselves from the drugs. Abruptly stopping these medications will result in extreme fatigue, and additional thyroid problems.

If depression becomes a serious problem, then sufferers may wish to read our article about eliminating depression naturally. Chronic constipation can be addressed by adding additional dietary fiber, such as psyllium or the superior hemp fiber. Sufferers will also want to take flax seed oil, and combine it with a food containing sulfur proteins; for example, goat cheese or eggs. This follows the Budwig Protocol's methodology, which decreases inflammation, increases oxygen intake, stimulates beneficial intestinal flora, and it provides a mild laxative effect.

Heavy metals and toxins can cause the thyroid to malfunction. This is particularly true in cases of Hashimoto's disease, wherein the thyroid is so poisoned that the immune system begins attacking it. Most people with thyroid disease will benefit from a heavy metal and liver cleanse, because thyroid impairment is generally the result of toxicity.

There is a lot of conflicting information regarding the application of iodine to treat Hashimoto's thyroiditis, so it is prudent that we comment. Dosage is especially important in these cases, as an overdose of iodine can cause the thyroid to shut down completely. However, a small amount of iodine does help this condition. Problems usually occur for those who take potassium iodide supplements, and those who take internal iodine drops. However, there is no evidence of adverse effects for those who moderately apply iodine transdermally. Applying iodine to the skin allows the body to regulate the iodine's absorption rate.