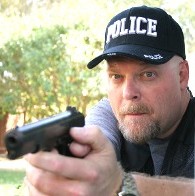 When we talk about the F.D.A.'s vendetta against alternative medicine, and their business relationship with Big Pharma, some of our newer readers may believe that we are a little paranoid.  In the latest example of F.D.A. induced aggression, local law enforcement personnel raided a Venice, California health food store for selling raw milk.

In a manner reminiscent of a hostage situation, police entered the store with guns drawn, to confiscate the contraband (milk).  California has been one of few states in which raw milk is regularly sold openly in stores.  While it is legal to sell raw milk in the state, regulators allege that the Rawesome Foods did not have proper licenses.  Of course, a license is not necessary for selling homogenized milk, which is the single biggest contributing factor to the number one killer in the United States, namely heart disease, or any junk food which has been tied to sudden heart attacks (MSG), brain tumors (aspartame), hormone related diseases (soy), or heart lesions (rapeseed and "canola" oil).  These can even be marketed as "healthy" foods, by F.D.A. regulations, but natural milk cannot be.  These foods are not "dangerous" like milk in its natural form, after all.

The nation's laws and local regulations mandate that police officers may only draw their guns when they are in imminent danger.  Thus, we must ask exactly what danger was presented in the health food store that they stormed, and if any of those officers will be held accountable for their actions.  You will also notice that the officers grabbed pretty much whatever they wanted to take, in addition to "confiscating" the milk.  The parallels to the corrupt 'Drug War' are difficult to miss.

We believe that the goal was not regulation enforcement, which would seem ridiculous given the remedy that they implemented involving terrorism and financial sabotage.  We believe that the F.D.A. was working, yet again, on behalf of its pharmaceutical partners to ensure that we remain sick and dependent on its disease-care industry.

"Agents from the Los Angeles County Department of Public Health, the FDA, the U.S. Department of Agriculture and others confiscated 17 coolers with honey, milk, cane syrup and other products."