Naturally Eliminating Cluster Headaches and How the Establishment is Blocking Cures 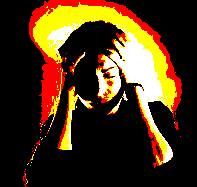 Cluster headaches are otherwise known as suicide headaches, because it is the common fate of many sufferers. These headaches are worse than migraines, and persist between 15 minutes and three hours, several times a day. This continues for weeks, months, or even years. These headaches frequently occur during sleep, on only one side of the head. Researchers have dubbed cluster headaches "one of the worst pain syndromes known to mankind". Those experiencing one of these super-headaches enters into a disoriented state, with confusion, short-term memory loss, the inability to understand those around them, and unbearable pain.

Especially knowledgeable readers may notice that the above set of symptoms identically occurs with oxygen deprivation. Incidentally, a pure oxygen tank is one of the few things that stops these attacks. We have extensively researched this topic for the sake of those suffering from cluster headaches, and we have concluded that cluster headaches are the result of inadequate amounts of oxygen reaching the brain.

Throughout the Internet, people with these headaches are seeking illegal drugs to provide them with relief. The drugs effect the blood vessels leading to the brain, which could help to explain their benefits. Strangely, these drugs normally constrict blood vessels, which most people would expect to cause a reduced oxygen level. In actuality, the constriction of the vessels seems to increase the flow of blood, due to the increased blood pressure. Perhaps temporary vessel enlargement is responsible for putting pressure on the brain, or the problem may be solely the oxygen starvation. Regardless, lower blood pressure means a slower movement of blood, and thereby, less overall movement of freshly oxygenated blood. Until much more research is performed, this mixture of facts and speculations is all that we have for diagnosis and treatment. Research concerning how medicines specifically effect cluster headaches is lacking, due to the current draconian drug laws against the only drugs that work. The inhumane drug war continues to stop people from accessing needed medicines, and it even prevents researchers from studying their effects.

Psilocybin mushrooms (commonly called "shrooms"), morning glory seeds, and L.S.D. have all been successfully used to mediate this condition. Dosages are much smaller than are used recreationally, with no hallucinogenic effects being noted in many cases. In addition to stopping the headaches, these drugs also seem to be able to prevent recurrences for several days. Considering the amount of pain that sufferers experience, it would be immoral for us to avoid mentioning these extremely effective remedies. However, we cannot officially recommend L.S.D., due to its extreme effects, length of "trip", and its unpredictable nature as a synthetic drug. Likewise, caution should be taken regarding the use of morning glory seeds, because retail seeds are often coated in chemicals to prevent this use, and the dangers of these chemicals are unknown. Anyone wishing to attempt medication with morning glory seeds should purchase only heirloom or organic seeds for safety.

Many cluster headache sufferers claim that their headaches are improved, or they have lower rates of occurrences when exposed to cooler air, or when exercising outside. All of these methods have a relationship with greater oxygen intake and short-term increases in blood pressure.

Chlorophyll supplementation has the fascinating property of allowing more oxygen to enter cells, while simultaneously protecting the cells from oxidative damage. It is the miraculous substance that is used by plants for photosynthesis (turning carbon dioxide and water into carbohydrates and oxygen). We strongly recommend that cluster headache sufferers purchase liquid chlorophyll concentrate, and place about ten drops directly onto their tongues several times a day, waiting for around 30 seconds, and then washing it down with a fluid. This will also provide the person with additional energy. Due to its copper content, it works best when combined with zinc.

Dr. Johanna Budwig pioneered what is now referred to as the Budwig Protocol. The protocol requires a special diet that is augmented with a mixture of flax seed oil and a source of sulfur proteins, such as goat cheese. Yogurt could be used instead of the cheese, but it is not as healthy, because it is usually made from homogenized milk. The Budwig Protocol was able to cure all types of cancers, reverse arthritis, and reverse some cases of heart disease. The protocol drives oxygen deeply into tissues, creating a healthier oxygen-rich environment, and an ideal alkaline body pH. For these reasons, it should also be beneficial for cluster headache victims.

L-tryptophan can be quite helpful too. It likely has a dual effect upon the headaches. First, it increases serotonin levels, which causes brain blood vessels to constrict. Secondly, it elevates blood pressure as a powerful natural anti-depressant. This is because whenever people are depressed, their metabolisms slow and their blood pressure drops. People have experienced some relief from this supplement, and it is available at some health food stores. Tryptophan brings balance to the chemicals inside the brain, creating needed amounts of serotonin, melatonin, lactic acid, and niacin. It is therefore strongly recommended.

There have been many sufferers who have benefited from breathing exercises. Given the extreme nature of this condition, it would be prudent for people to attempt breathing exercises, such as those that are encouraged by the various traditional martial arts. Deep, proper breathing will allow more oxygen into the brain, thus helping during attacks.

The principle of oxygenating the body will have some readers considering the use of hydrogen peroxide for treating this condition, either orally, or with an inhaled mist. Research shows it to be of little benefit.

Response of cluster headache to psilocybin and LSD, Journal of the American Neurology

You Should Consider Chlorophyll Supplementation