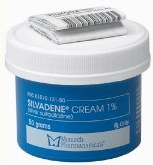 Medical silver creams, like this one, are only available with a prescription.

Day-to-day burns are often treated with various over the counter creams that are found at pharmacies.  They are notorious for having little to no effect, and burns to the tongue are deemed untreatable.  However, in burn centers, an alternative remedy is being used all across the country, and there is nothing that comes close to its effectiveness in existence.  This substance is silver.

Silver has been known for decades as the best substance for burns, and even the mainstream medical establishment cannot deny its benefits.  Nothing comes close to providing such relief.  Along with repairing the damaged skin, silver also prevents infections, which is a common complication with severe burns.  While silver is regularly used in hospitals, high-end medical creams can be problematic to obtain, because prescriptions are required.  Unfortunately, the federal government interferes with our right to access essential medical supplies, even when they are completely safe.  It's all about maximizing profits, compliance, and ensuring that sooner or later we will come begging.

Some of the gels available from alternative medicine suppliers are mixed with petroleum, so we strongly recommend reading the ingredients lists.  The simplest choice is to simply use a colloidal silver product, even though larger particle solutions are more effective for topical usage.  When used externally, we see no reason why people should not make their own gel formulations, but we do not recommend making homemade silver that is for internal use.  This is because it is too easy to mistakenly make large particle solutions, or impart accidental impurities, which could result in argyria, a blueish-graying of the skin.

Silver does not have to be reserved for severe cases.  It can be used for sunburns, kitchen accidents, and the occasional burnt tongue.  Different methods of application would generally be used for each of these.

Using silver to treat burns is actually a good way to test the overall quality of your silver.  Some silver products are so diluted that they will not have any effect at all, and thus will be unlikely to help thwart any infection either.  Premium silver solutions are truly miraculous, and silver's better-than-steroid effect upon burns is one of the qualities that compel its use in orthodox medicine. Bad silver is worse than none at all. So, we strongly recommend either making your own colloidal silver, or purchasing Purevon brand colloidal silver.

Dirty Secrets: Why Silver has been Suppressed

Colloidal silver was commonly used for a wide range of infections before the chemical industry hijacked medicine.  It was one of the first natural remedies that the Food and Drug Administration attacked, shortly after its creation.  Silver is deadly to polio, and it could have quickly halted the polio epidemic, if it had not been under a suppression campaign by the FDA.  Unfortunately, the vaccine and antibiotics industries were being promoted heavily at the time, at the expense of many lives.  Of course, the polio epidemic would not have been so life threatening if it had not been for the common practice of tonsillectomies in the early part of the 20th century.  The tonsils are the only organ that produce polio antibodies.  Suppressing silver was one part of the one-two punch needed to convince us of the necessity of vaccines, because removing silver from the market dramatically promoted the spread of polio amongst the pubic, just as the tonsillectomies did.  These things made polio much more severe.  Finally, a vaccine was released at exactly the time when the epidemic was in its natural decline, so that those monsters could claim their victory over polio.  Other nations without the vaccine actually tended to eliminate their polio epidemics faster than the U.S..  The vaccine "victory over polio" would be the biggest medical con-job in history if it were not for chemotherapy and radiation treatments.