Everyone in our home, except for our six-year-old, has experienced some form of abuse.  Thus, we have at least a partial understanding of Sarah's suffering.  However, with Sarah being a female victim of sexual abuse, she has educated us about issues we could never foresee.

We all love Sarah, but none of us can dispute that she is a freak magnet any longer. This is especially the case for her in regards to her internet use.  If you ever want to be bombarded by freaks and predators, then simply post the picture of a young blond girl online, which you pretend is you, and then claim that you are the victim of sexual abuse.  I have witnessed this freak-show phenomena myself, and it is as disturbing as it is remarkable.

All of them scheme to manipulate, because as pedophiles, they are seeking people who are easily controlled.  They assume all abuse victims are easy to manipulate, because they were somehow manipulated in the past to not seek help.  Thus, they seek people like Sarah as easy targets, and they really are this devious and methodical.

Sarah has shared many of their messages with me.  Some of them attempted subtlety, and some of the bolder ones actually requested her physical address.  All of them have a single ultimate goal: to seduce a teenage girl and instigate an abusively controlling relationship.  Again, it is all about picking easy targets.  Sarah has received these type of messages from men in their 70's.  It has become a running joke in our house about "Sarah's men". 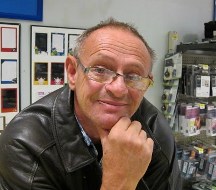 The newest stalker, Paul Faulkenham, feels enraged by Sarah's refusal to respond to him, and appears to be rather concerned that she will expose him, so Paul decided to beat her to the punch.  These types do like to hit first, and ask questions later, after all.  It is rather common, but Paul was initially more aggressive than most.

Paul Faulkenham's preemptive attempt to discredit Sarah appeared on her personal message board at the WikiAnswers site, where she helps other abuse victims and answers health questions.  By the way, discrediting victims, and future victims, is right out of the play book, because the predator must make certain that no one believes the victims, in case they eventually speak out.

"Strange thing about you. You haven't responded to any of my emails of late, there's no website that I know of and for a 16 year old, you seem to be very well written and spoken in emails that is.

I'm wondering if you aren't an undercover cop, trying to lure guys into proposing something to you?  If indeed you were abused as you say perhaps you are playing mind games, I just don't know but something sure smells phony about you and yes you can delete this, but hopefully others will read it before it's deleted and not bother with you."

Notice the fantasy about Sarah trying to seduce ("lure") him?  I am quite certain this had no basis in the reality that most of us subscribe to.

Before continuing, it is worth noting Paul's writing style as shown above, because in his reality he is a successful and professional writer.  Never mind the fact that he has nothing published. His "books" are on the Internet.  One of them contains this description: "Hugo Valentine, serial killer at large, makes 'Silence of the Lambs' look like child's play. There seems no way to stop this mad-man..." He uses a graphic of blood dripping (http://www.angelfire.com/electronic/fairgoebooks/bookcatch.htm) to advertise it.  It is worth noting that for sociopathic pedophiles, there is a great obsession with bizarre sexual activities and violence.  Many times the two are combined.

Some readers may assume that this article is a practical joke when they notice the eerie similarity between this guy's appearance and the character Hannibal from Silence of the Lambs. There is no joke here, and we were just as surprised.

This particular predator is so intelligent, cunning, and manipulative that Sarah has been considering writing about him for several weeks to warn as many people as possible.  I am at fault for her not having done it.  We had long discussions about him on several occasions analyzing the way he molded his personality perfectly to be like the type of person that Sarah would find interesting, how he conveniently happened to be a person who could explain the process of getting her work published, and about his obsessions with sexual and violent abuse issues.  There is an archived screenshot in case the evidence disappears.  We have literally written a book on the topic, and the warning signs were practically screaming at us.  Nevertheless, we could not be absolutely certain until the post quoted above appeared, and I shall cite why we are certain now.

Paul Faulkenham appears to be angry and nervous that Sarah could be an undercover cop pursuing pedophiles.  What type of person would this disturb if it were true?  What is really telling is his desire to warn pedophiles about her.  Even career criminals hate pedophiles enough to avoid warning them about the police.  There is only one class of people (and I use the word "class" loosely) who wishes to protect pedophiles.  He is certainly no fan of the law-enforcement community, and I have to wonder why that is.  Regarding his statement, "If indeed you were abused as you say perhaps you are playing mind games": allow me to translate this typical abuser logic into something that makes sense to the rest of us.  This is the logic of blaming the victim, because the victims of abuse obviously deserve what they get for their "mind games".  You may want to review the "putting them in their place" rule as mentioned above, because it ties directly into this.

Paul also sent her an e-mail prior to this message in which he also expressed concern that she was a cop, and for that reason, he pledged that he would no longer communicate with her.  We had him profiled well enough at that point to know that he would be back, despite his attempt at a threat.  He was merely threatening to cut her off to determine if she had taken the bait.  It's another standard practice akin to: "if you won't obey then I won't be your friend anymore".  It is a method of testing his power over his victim.  Without doubt, Paul hoped that she would reply with a "please do not stop talking to me" e-mail, which would demonstrate that he had the power, and that she would be willing to bargain for his attention.  At that point, he would know that he was in route to owning her like a piece of property, which was the ultimate goal.

"I've been on the Internet since 1996, and during that time I have met a lot of people, mostly women, who in one way or another have been molested either sexually or mentally.  It amazes me as to how many women there are in our world, who at one time or another have been abused in many different ways.  The Internet is full of these women, seeking some sort of answers to the many questions of why me, or how could I have let a man abuse me?"

He continued in other messages:

"Rarely could any of the many women I've spoken to over the years been able to explain why or how the abuse started and more so, why they continued to live with abusers.  It's really a sad world we live in when it comes to abuse and more so, it's not only women who are abused, men too and many of them as well. Sociopath come in more than one shape, age, and gender."

"Later in life when I got more involved with women I always looked for women with emotional problems or drinking or drug problems always thinking that I could help them as I had tried years before to help my father.  Of course I didn't realize that I was sick and traumatized from my childhood and it was only after I got in trouble with the law that I saw a professional and he pointed out my weakness.  From that day to this one, I never dated a woman with problems that involved booze or drugs and my life has been a lot better."

On other sites (http://www.socyberty.com/Issues/Sex-Education-American-Style.187099), he writes:

"It's really sad to realize that American kids for the most part don't have a clue about sex, especially girls."

"If you don't know yourself, why not go and visit a Library, get a book on Sex, and go over it with your children."

There is little need to comment further.  Fortunately, most people like this are dumb, but this case is an exception.  Paul is not to be underestimated.  We wanted an accurate record of what transpired before he begins his campaign in full of discrediting Sarah (and we know his type well enough to predict that soon), and we wanted others to know about this person since he is using the WikiAnswers system to reach vulnerable abused teenage girls.

An Explanation About The Problems At WikiAnswers