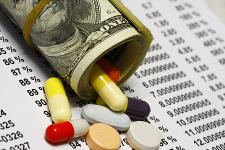 Recently, our Sarah made a random health industry remark on Facebook concerning its corruption. The remark greatly enraged a close relative of Sarah's, who responded with a scalding reply. This relative works for the N.H.S. (National Health Service of England), and Sarah's remark was a little too threatening for her.  Sarah hit a little too close to the mark.

"People are donating for World Diabetes Day, but that isn't going to change anything but line the pockets of those who do not want a cure."

After getting a harsh reply, Sarah in turn graciously responded with:

"It ﻿seems that you were offended by my post which recommended that people do not donate to 'World Diabetes Day'.  I didn't say that because I am a cold or callous person.  I said it because I know that it will not help at all -- nor will these 'walk for cancer' events.  This money goes to groups which actually profit from the sickness of people.  I was cured of pre-diabetes almost three years ago, and I know of those who have been cured of full-blown diabetes.  It can be done, but the remedy is not in a pill.  Curing yourself from diabetes takes a tremendous amount of effort to change the diet (and lifestyle), but it definitely can be done."

Of course, Sarah was correct about everything.  Modern medicine is a lavishly profitable industry that is chiefly concerned with creating perpetual drug dependencies in its victims, instead of curing anything.  The word cure is not even in their vocabulary anymore; and of course, we've all been told just how "incurable" diabetes is.

Sarah, by the way, cured herself of diabetes using cheap herbs and a natural diet.  The gentle process took her only 3 months to complete.  It must have been some kind of miracle!  It happens to be a routine miracle for diabetics who turn to alternative medicine.  Alas, Sarah will not need to worry about heart disease, blindness, failing kidneys, or losing her feet, like those who are feeding the beast by donating toward researching that supposedly elusive cure.   It makes me wonder how many medical researchers during the last century were bribed or threatened into silence to ensure that the money continues rolling in -- to ensure that their industry's "science" isn't threatened by disproof.  Unfortunately, it was far too easy to suppress information before the Internet, and the diabetic genocide still continues, even now.

Diabetes can be extremely difficult to cure after doctors have given synthetic insulins (i.e. the primary treatment) to patients.  Synthetic insulins conveniently cripple a person's pancreas, and thus makes a full recovery from diabetes very difficult.  Funny how that works out for them.  The safer and all natural insulins were banned by their partners at the F.D.A., since natural substances cannot be monopoly patented by their pharmaceutical friends.  It's one big happy mafia-like family.  Just remind yourself that they're going to find that elusive cure one of these days.  (wink.)

I wonder how deep the rabbit hole goes, since none of the Big Media companies have ever reported a story of any person curing himself naturally.  Conversely, they do regurgitate the party line endlessly about how "incurable" diabetes is, along with its bastard cousins of heart disease and cancer.  By the way, these three are coincidentally the three biggest medical profit-makers.  Funny how that works.  Maybe we're not walking enough for the cure, so they just do not have enough money yet.

To this relative of Sarah's, all I can say is that the truth obviously hurts, and it should hurt.  Interestingly enough, she has diabetes herself, and like in the case of a thin cook, one should never trust a sick doctor.  She shall continue to suffer with diabetes for as long as she deserves it.  Our mailbox remains open in case she decides to save herself from the system.  However, she'll likely die horribly, while telling herself how 'right' she was.  It's an old story we've grown tired of.