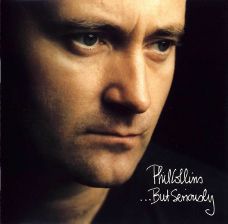 Collins' stellar career began meekly as a drummer for multiple gigs and groups, but Collins realized that he was on the brink of greatness when he joined a group of musical gods known as Genesis. Within five years, Collins would graduate from being the drummer who was known for providing the group's creativity to being its lead singer. He replaced the esteemed Peter Gabriel. Some people feel that Collins was a better Peter Gabriel than Peter Gabriel. Every person exposed to the new Genesis under Phil's leadership could see it, and they could definitely hear it: big things were about to happen for Genesis. The world of rock music laid before them for the taking, and they took it.

Collins still exudes class and character in everything that he does. We desperately need more Phil Collins in the world. He was born as an Englishman, but he managed to overtake American music like a typhoon during the Reaganesque, Miami Vice era. One of the things that touches me about Phil Collins is, of course, his music; but it goes beyond that. Collins crafted some of the most sincere, moral messages ever to be penned, and then blended them into some of the most beautiful music ever created. He used his music as a tool for changing people for the better. The following lyrics below provide an excellent example of Collins' moral fortitude and character.

The Medical Downfall of Phil Collins

In 2009, Phil began to suffer from serious pain in his neck, resulting from a dislocated vertebrae. He went to see a regular doctor, and this was likely to have been the biggest mistake of his life. One surgery later and Phil had lost control over his priceless drumming hands. Not only is this elite musician completely unable to drum, but he cannot let go of a spoon, or even open his car door unassisted. The surgeons accidentally cut the nerves to his hands, and short of a miracle, he will never drum again. He will not be able to hold a microphone again, or let it go if he actually manages to hang onto it.

"My vertebrae has been crushing my spinal cord because of the position I drum in. It comes from years of playing. I can't even hold the sticks properly without it being painful... The first time I picked up the drumsticks after my neck surgery, they flew across the room because I couldn't grip them. When I play, I've had to tape the sticks to my hand... I'm having an operation soon and there's a good chance of it improving over time."

We are not so optimistic about Collins' prognosis. What Phil should really expect, if he could honestly appraise the situation, is dozens of surgeries over the next 10 years. At no point is there going to be any substantial improvement until he steps off the allopathic treadmill, and never looks back. It is his only hope.

The frustrating part of such situations is knowing how avoidable they are. Let's take for example the very worst case of spinal aggravation and misalignment, as if Phil's spine had been pulverized in an automotive accident. A competent chiropractor could have healed (permanently cured) Phil's back in a matter of months, or perhaps a year for this extreme example, with considerably less pain, risk, money, and time. Instead, Collins submitted to being butchered, and his butchers cut the wrong thing. If he had been wiser, he would have applied a chiropractic approach and combined it with strength training exercises to support his weak back areas, and perhaps undertook a diet that would have helped him to resist such aging issues. He could have cured his problem relatively cheaply and easily, and perhaps reversed 20 years of aging in the process.

That is not how it happened. We scoured the 'Net searching for any reference to Collins seeking alternative therapies, but it was as we suspected. Did Phil ever stop to reflect on just how patently stupid it was? It hardly requires 12 years of intensive medical training to see something is terribly wrong with an approach of slicing and dicing an already injured area of the body, and his severed nerves stand in silent testament to it. We have to wonder what the surgeons hope to accomplish. Consider the following: The problem with Phil's hands is that his nerves were cut, and according to the medical establishment, cut nerves do not heal, so what could possibly be the goal of cutting into Collins' back even more? Finishing the job? Get his feet the next time?

Using naturopathic techniques, it is sometimes possible to heal nerve damage, even severed ones. The orthodox doctors will tell him that it is impossible, but history should prove to Collins that they cannot be trusted. I believe in miracles, and I hope that by fate or divine intervention that Phil Collins will someday stumble across this. If he does, I hope it will inspire him to take control of the situation, and to save himself. As he so poetically said himself: "So hope against hope. It's not too late".

In June of 2012, Phil Collins announced that he felt it was necessary to retire from the music industry forever, because he would never again be able to perform as he once had.