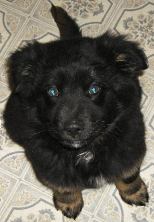 Veterinary medicine has become as twisted as the regular medical establishment, with its religious use of vaccinations, and unnecessary drugging, before any real problem arises. As usual, they create problems with their drugs. Vaccines are known to cause aggression in cats, and docility in dogs.

The Internet is riddled with concerned pet owners who worry when their pets choose to drink muddy water over tap, or even spring water. The act of digging a hole, and then drinking from the muddy puddle, indicates a mineral deficiency. The same is true for dogs who drink rapidly, until they regurgitate, or simply eat dirt.

High quality dog food can eliminate this problem. It is important to remember that vegetables are not a natural part of a dog's diet, so many of the canine foods available at health food stores are significantly less than ideal. High quality animal food is often extremely difficult to locate, and eliminating severe mineral deficiencies can be equally problematic. A good way to remedy this is by purchasing a mineral block ("mineral brick"), and then placing it close to the animal's source of water. These blocks will make animals thirstier due to their sodium content, so more water needs to be available, but the symptoms of mineral deficiencies will disappear. People who follow this therapy soon discover that dogs do not really suffer from Prozac deficiencies after all.

Those who have pets should also avoid providing food and water in plastic containers, because they place toxins into the water, and these will leach out at accelerated rates over time. Stainless steel or ceramic materials are best. There have been many cases in which epileptic dogs were cured when their water bowls were changed, and this speaks volumes about the effects of our own plastic containers. At the same time, canines are known to be more susceptible than humans to certain toxins.

Many pet owners will have an interest in natural parasite cleanses. Do not feed pets walnut hulls, or wormwood, or any other herb until you have researched its potential toxicity. This research could easily mean the difference between life and death for your pet. Diatomaceous earth and pumpkin seed oil are known to be safe.

Why Pets Are Good For You

Why Puberty Is Occurring In Seven and Eight Year Old Girls

# Basic animal care — Judy Brown 2011-01-08 17:57
I like your story on pets I have a cat who will be very docile and loving all day and then in the evening he gets snippy He constsantly meows if you walk past him and hisses at youlike he is in fear for his safety I have been trying to fiqure out what causes it with no success
Reply | Reply with quote | Quote
Refresh comments list