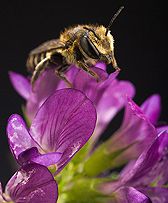 "Beekeepers on the east coast of the United States complain that they have lost more than 70 percent of their stock since late last year, while the west coast has seen a decline of up to 60 percent."

Many people blame pesticides, but it is important to remember that conventional pesticides were used for many decades prior, and they had never caused such a dramatic depopulation. Although there is a new generation of pesticides that are sprayed onto the soil, resulting in toxins being incorporated into every cell of the plants via the roots. The effects of these new fumigants on the dwindling bee populations are unknown, but our research indicates that there exists an even greater threat than these new-age pesticides.

In late 2002, so-called "Bt corn" was approved for commercial use. Its safety record was based solely on studies that had been done by its manufacturer, Monsanto [3]. B.T. is an abbreviation for Bacill thuringiensis, a bacterial toxin that kills the main predator of corn (a caterpillar). Through genetic modifications, Monsanto incorporated this toxin into the genetic structure of its genetically modified corn product. Monsanto's herbicide resistant, Roundup Ready varieties of crops are already widely known, but few people are aware of their toxic corn that has been genetically engineered to kill all insects that eat it. The corn plants were genetically altered to be inherently poisonous, so it is not possible to wash the produce clean of the pesticide. Technically, the plant is not actually corn anymore, and it would likely fail a DNA test for corn. It looks like corn, but it acts as an insecticide bait within the growing fields. It is also on the dinner tables of millions of people who were given no warning. Monsanto's B.T. "corn" is a genetically engineered, corn-like product that was designed to be an insecticide delivery system that naturally germinates internal bacterial toxins.

The bacterial disease, Bacill thuringiensis, was historically sprayed onto plants prior to its direct incorporation into every plant cell by Monsanto's engineering. Genetically engineered plants containing B.T. were approved for use under the agreement that there could be no health risk to non-target insects. There has been no serious consideration of human health implications by U.S. regulatory agencies at any point. B.T. was briefly studied for its effects upon bees, but only an immediate and direct correlation was studied. The test bees were exposed to B.T. in a controlled setting, and had the bees died within a few days, then a direct correlation would have been inferred. However, this is not how the toxin actually works, so the usual industry 'science' was employed to get the 'right' test results. The sub-lethal effects that cause massive fatalities from long-term side effects were categorically ignored; even though this is how the toxin is supposed to eliminate insects [4]. Monsanto itself was allowed to perform and fund all of its own testing, without any pesky independent 3rd parties to ruin their scientific results. Their "corn" product is now in the food supply for both humans and bees.

"The [Monsanto] study concluded that there was no evidence of a 'toxic effect of Bt corn on healthy honeybee populations'. But when, by sheer chance, the bees used in the experiments were infested with a parasite, something eerie happened. According to the Jena study, a 'significantly stronger decline in the number of bees' occurred among the insects that had been fed a highly concentrated Bt. poison feed."

There has been evidence of Varroa mites attacking bees in the United States for decades. They are a type of parasite that sucks hemolymph (a fluid from the circulatory system) from bees, leading to diseases and deaths. It has been attributed to causing fall dwindle disease. However, some beekeepers have noticed that their bees can survive in the presence of these mites, particularly when the beekeepers did not use antibiotics or gases inside the hives. Only bees with weakened immunities cannot survive Varroa mites. It is the combination of these natural parasites and genetically engineered B.T. pollen that is proving to be especially fatal. When bees have historically died from parasites, diseases or pesticides, the beekeepers saw piles of dead bees outside the hives. The dead had been carried outside by the worker bees.

"Colonies can die so fast from high Varroa infestations that thousands of dead bees will pile in front of the hive."

The historical patterns are no longer being witnessed in recent cases of colony collapse disorder. Bees are simply vanishing without a trace. Scientists are having trouble explaining the cause of these disappearances; and beekeepers are typically horrified whenever their hives suddenly become empty [6]. In recent cases of colony collapse disorder, the adult bees disappear, leaving behind only young bees to complete the tasks of adults. The queen always remains.

Bacterial toxin Bacill thuringiensis is known to provoke an immune response in both humans and bees [7,8,2]. The immune response in a bee prevents proper memory formation, and causes overall confusion [9,10]. One of the initial symptoms of impending colony collapse is a bee's decreased navigational ability [11]. During the summer, bees have enough available pollen to be able to tolerate weakened immune systems. However, in the winter months, when pollen becomes scarce, and the bees have to travel much further, then their decreased navigational ability becomes fatal [12]. They never find their way home. Thus, many beekeepers find their colonies to be vacated when they check in the spring. The aftermath is vanished bees, and a lonely queen.

A preliminary report that was published by the Colony Collapse Disorder Working Group mentioned that they had found crystalline compounds in dead bees [13]. B.T. is specifically designed to form these crystals, which fatally create holes in insects' gut membranes. The same report also found scar tissues that were attributed to immune responses. It is the fingerprint of B.T. damage. This is exactly how Monsanto's B.T. "corn" was designed to kill.

"It is particularly worrisome that the bees' death is accompanied by a set of symptoms which does not seem to match anything in the literature."

More research into the effects of Bacill thuringiensis on bee populations is ongoing; but meanwhile, the bees are dying at an alarming rate, and genetically engineered crops are still growing in the wild. This is yet another example of serious research being done only after the harm has been found, and with none of it actually being done by the groups who are legally and ethically required to do it. It may now be impossible to completely eliminate Monsanto's genetically engineered, toxin-laced, Frankencrops, due to cross-pollination, which was almost certainly intended. In fact, Monsanto routinely sues farmers for having crops that have been tainted by its genetically-altered pollens, as if those farmers had stolen from the company by just being down wind. What is most amazing is that Monsanto wins these cases. Monsanto always wins, and it even has its former attorney as a judge in the U.S. Supreme Court (Clarence Thomas).

Despite assurances by the guilty parties that Bacill thuringiensis does not have any effect upon non-target insects, a slew of independent studies have shown otherwise. One showed that B.T. can poison streams, reducing the growth and increasing the mortality of a variety of insects [14]. The study expressed concern over the long-term ecological impact of killing insects on such a widespread scale. In a clinical trial performed by E. J. Rosi-Marshall (et al.), in 2007, it was concluded that:

Even Organic Growers are Killing Bees

Whilst researching Bacill thuringiensis, we discovered that even organic growers are using this toxin. B.T. is a bacterial toxin, and thus it is allowed to be called "natural". Organic crops are not genetically engineered unless there has been a pollination contamination, but B.T. is often sprayed onto the crops as an "all natural" pesticide. This is particularly disturbing, because very few people who purchase organic products would find such bacterial contamination to be acceptable or honest.

What You Can Do

Analysis of the cellular immune response induced by Bacillus thuringiensis Cry1A toxins in mice: effect of the hydrophobic motif from diphtheria toxin.National Institutes of Health

Bees use maize pollen only when there are no alternatives, EU Ministry of Education and Research

Vote against Genetically Engineered Foods For Children by Boycotting Kellogg's