It may stun many readers to learn that the Susan G. Komen Breast Cancer Foundation sponsors Planned Parenthood, the "family planning" organization that performs assembly-line abortions. The Komen Foundation is also an organization that conveniently neglects to mention that both abortions and radiation from routine mammograms are methods of inducing breast cancers. The risk of getting breast cancer from either of these activities alone is greater than the risks of smoking and poor diet combined. The Susan G. Komen Breast Cancer Foundation may very well be the greatest cause of breast cancer in the world.

The amount of money that the Susan G. Komen Breast Cancer Foundation has donated to Planned Parenthood is being kept obscured. Life News reported that $730,000 was donated to the abortion organization in 2009 alone, but we are unable to confirm the exact figure. A public relations representative from the Komen Foundation disclosed to The Health Wyze Report that the amount of money annually funneled into Planned Parenthood is "about $700,000", which lends strong credence to the earlier figure. The Komen Foundation boasts that it has "invested almost $2 billion" since its inception in 1982. What the Komen Foundation actually does with that funding is never disclosed. The money is shrouded in secrecy, but it is said to be "energizing science".

"Our only goal for our granting process is to support women and families in the fight against breast cancer. Amending our criteria will ensure that politics has no place in our grant process. We will continue to fund existing grants, including those of Planned Parenthood, and preserve their eligibility to apply for future grants, while maintaining the ability of our affiliates to make funding decisions that meet the needs of their communities."

All of these things would be considered horrendous by the pro-life advocates and churches who regularly donate to the Komen Foundation. They are kept ignorant of the special partnership between Komen and Planned Parenthood. Planned Parenthood is scarcely mentioned on the Komen web site. In the event that the partnership is noticed by Christian benefactors, the Komen Foundation has a statement ready from their token Christian, Norman Roberts, who attempts to rationalize funneling donated funds to Planned Parenthood as "moral". The organization considers its fundraising to be moral, despite defrauding its own donors as a routine part of its 'charity' work.

Komen appears to have a policy of partnering with unethical organizations and their pink ribbons never appear on organic foods. They tend to promote only cancer-causing foods and products. The irony of their past support for aluminum-containing (breast cancer causing) deodorants is staggering, and their partnership with KFC was mocked publicly by comedian Stephen Colbert. The organization's partners range from aspartame-laced yogurts to MSG-containing pizzas. Under the banner of saving lives, we find an organization promoting cancer in its every action.

The evidence suggests that the Komen organization has no sincere interest in the cause or cure of cancer. Any success would immediately dry-up its funding, so cures are the last thing that the foundation wants. This is why its members sidestep mentioning any safer or more effective therapies than the status quo. One need not have billions in research funding to discover effective cures or the causes of cancer; for all that is needed is a free card to any public library, or an Internet connection to learn about the 1931 Nobel Prize in medicine discovery of Dr. Otto Warburg. The Komen organization's continued silent complicity with a medical system that easily kills 10 times the number of people who are killed by the cancers themselves is positive proof that maintaining the status quo is their for-profit business model. Meanwhile, as the cancer industry carnage continues, their profits have gone from the millions into the billions, and Komen does not even pay tax.

Where exactly is the two billion dollars of research? After its 31+ years of existence, the organization has yet to show an accomplishment or even a single research paper. On the other hand, it has helped to fund millions of abortions using other people's money without their consent. That could be considered an accomplishment from a certain perspective.

Corporations who market with Komen's pink ribbons do so because they get greater profits, due to increased customer sales. It is a con job of legendary proportions that despicably targets the most well intentioned of our society. Awhile, not so much as a finger has been lifted in any honest effort to save any person's life. Readers may wish to begin their own quest to locate any cancer victim who has ever been helped by Komen. The cancer deaths indirectly caused by the products of their corporate partners, and more directly from the Komen-sponsored abortions, are easily into the many millions. 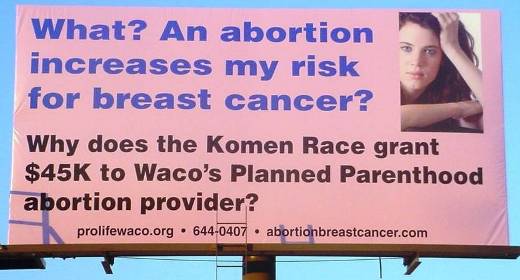 Despite dishonest public comments from Komen's representatives to the contrary, abortion increases the risk of breast cancer. It is not a small increase. For virtually every category of women, in every age group, the chance of getting cancer more than doubles after an abortion. When abortions are combined with birth control pill usage, and radioactive exams (both given by their partner organization) then the long-term prognosis is bleak.

Something never mentioned by Komen or Planned Parenthood is the fact that the surest way to prevent breast cancer is to have a child and then breast feed him. Women become more vulnerable to breast cancer as soon as they become pregnant, showing the unique influence of pregnancy-related hormones, and many researchers believe that a permanent hormonal imbalance is created whenever an abortion interrupts the natural birthing cycle. This explains the correlation between abortions and breast cancers. It is similar to the way in which women with C-sections cannot lose weight afterward, since the natural birthing process was interrupted, which in-turn prevented their hormones from automatically resetting. Following pregnancy, women who breast feed their children are well protected against breast cancer. Cancer resistance is much greater for these woman than for those who did not have children. This is why breast cancer was once referred to as the "Nun's Disease", because only nuns (who were childless) got breast cancer. One might expect these findings to be in Komen's literature, since the organization purports to be so concerned about preventing breast cancers. Instead, the hormone research is a topic that is avoided, but it has been public since the 1970's.

"The longer women breast feed the more they are protected against breast cancer."

Komen has been under fire from legitimate breast cancer charities, due to its unethical marketing schemes. Particularly highlighted as an example is its partnership with Yoplait, which donated ten cents for each lid that was mailed in by consumers. At the time, postage for this cost 37 cents. Thus, the campaign was largely a farce, but it managed to get people to buy the product at an increased rate, and it required customers to give their address details to Yoplait marketing. This overall pattern of trapping good people through bait-and-switch tactics is seen throughout the huge pink ribbon industry. It is worth mentioning that Yoplait is a yogurt that features high fructose corn syrup, and it also includes the chemically-engineered form of vitamin A to make it 'healthy'.

Komen likes to threaten lawsuits whenever legitimate non-profits use the phrase "for the cure", and it warns companies to never use the color pink in combination with the word "cure". Normally, charities do not legally attack others who have the same altruistic goals, but Komen is not a normal charity; and it is very arguably not even a charity at all. Showing its true character as a business, Komen protects what it perceives to be its trademarks. Jennifer Jenkins, Director of the Center for the Study of the Public Domain at Duke Law School, claims that such threats are typically on "shaky legal ground". Everyday phrases like "for the cure" cannot be trademarked; but so far, no one has challenged this corporate superpower's bogus intellectual property claims of owning everything associated with the color pink and breast cancer.

While they are adamant that they are making a positive difference toward curing breast cancer, most of their public activity involves supporting non-progressive organizations that provide failed, cancer-causing procedures or carcinogenic toxins. There is no mention of the risk of false positives for tests, the dangerous effects of radiation exposure, or the bleak outlook for those who follow the procedures that Komen supports. They especially neglect to mention that avoiding an abortion often saves two lives. There's a killing to be made, after all.

The use of pink in Komen marketing, and the constant female-only imagery shows the unfortunate influence of feminism in our society. For this reason, other news organizations shy away from criticism of Komen, since questioning the organization is an easy way to get labeled as sexist and unsympathetic to cancer victims. Therefore, Komen is relatively immune from criticism and honest coverage about its activities. To most news outlets, this 'charity' is beyond investigation.

Planned Parenthood and the Komen Foundation make surprisingly fitting partners, since they are both militant promoters of a feminist ideology and internally have a death worship culture. These ideals overshadow any amount of compassion for the women who they claim to help. The ultimate product of their agenda is broken families and widespread death. While Planned Parenthood manages to achieve its anti-family and anti-Christian agenda in a direct and obvious manner, the Komen Foundation is more subtle with its own internal strategy groups, such as the Lesbian, Gay, Bisexual and Transgender National Advisory Council.