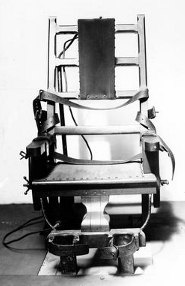 Many Americans think electro-convulsive therapy has been abandoned.  But American psychiatry still regards it as a respected treatment, even for kids.

"Of all tyrannies, a tyranny sincerely exercised for the good of its victims may be the most oppressive."

Psychiatry's "shock doctrine" is quite literally electroshock, and its latest victims are – I'm not kidding – young children.

On Jan. 25, 2009, the Herald Sun in Melbourne, Australia, reported: "Children younger than 4 who are considered mentally disturbed are being treated with controversial electric shock treatment." In Australia, the use of electroconvulsive therapy (ECT) is increasing, and the Herald Sun's report on "Child Shock Therapy" stated that last year, "statistics record 203 ECT treatments on children younger than 14 -- including 55 aged 4 and younger."

Many Americans think that ECT has gone the way of bloodletting, but it continues to be regarded by American psychiatry as a respected treatment, especially for patients who are "treatment resistant" to drugs. Although ECT for young children is nowhere near as common as for adults, most U.S. states do not prohibit ECT for kids. California prohibits ECT for children under the age of 12 but allows children between 12 and 15 to receive ECT if three psychiatrists are in favor of it.

You might think that before any child receives a series of 70 to 170 volts of brain zappings and is thrown into seizures, every other non-traumatic therapy would have been attempted.  You might think that before using ECT, in addition to trying every type of psychotherapy, there would also be an exhaustive effort to find a therapist with whom a kid might genuinely connect.  You might think all this, but you would be wrong. It is not unusual for psychiatrists to simply prescribe one drug, then another drug, then several drug combinations (called "cocktails"), and if those fail, recommend ECT.

The disproportionate use of ECT on women, especially older women, once made it a feminist issue, but I heard no feminist opposition when Kitty Dukakis recently came out positively about her own ECT.  Psychiatry is well aware of its historical bad press about ECT, including Sylvia Plath's nightmarish ordeal, so today, ECT is far more pleasant to observe.  Patients are administered an anesthetic and a muscle relaxant prior to ECT so they don't writhe in agony as seizures are induced.  However, the effects on the brain have not changed.

There are various modern ECT techniques. However, the scientific reality is that for all of these techniques, without evidence of any brain malignancy, the brain is damaged.  Neurologist Sidney Sament describes the process:

"After a few sessions of ECT, the symptoms are those of moderate cerebral contusions ... Electroconvulsive therapy in effect may be defined as a controlled type of brain damage produced by electrical means ... In all cases, the ECT ‘response' is due to the concussion-type, or more serious, effect of ECT. The patient 'forgets' his symptoms because the brain damage destroys memory traces in the brain, and the patient has to pay for this by a reduction in mental capacity of varying degree."

In January 2007, the journal Neuropsychopharmacology published an article about a large-scale study on the cognitive effects (immediately and six months later) of currently used ECT techniques.  The researchers found that modern ECT techniques produce "pronounced slowing of reaction time" and "persisting retrograde amnesia" (the inability to recall events that occurred before the traumatic event) that continue six months after treatment.

While ECT proponents admit to collateral damage, especially memory loss, they claim that it is an effective treatment.  However, a Kitty Dukakis testimonial is not exactly science. With respect to preventing suicide, the Journal of Affective Disorders in 1999 ("Retrospective Controlled Study of Inpatient ECT: Does it Prevent Suicide?") reported, "We failed to demonstrate that ECT had prevented suicide in hospitalized patients."

Longtime ECT critic, psychiatrist Peter Breggin, in the International Journal of Risk & Safety in Medicine in 1998 ("Electroshock: Scientific, Ethical, and Political Issues"), reported that at establishment psychiatry's "Consensus Conference on ECT" in 1985, ECT advocates were unable to come forth with one controlled study showing that ECT had any positive effect beyond four weeks and that many other ECT studies showed that it had no positive effect at all.

The heretical Breggin added, "That ECT had no positive effect after four weeks confirms the brain-disabling principle, since four weeks is the approximate time for significant recovery from the most obvious mind-numbing or euphoric effects of the ECT-induced acute organic brain syndrome."  Breggin's "brain-disabling principle" is that even when ECT does "work," it works only temporarily -- the same way that a blow by a sledgehammer or an acid trip might temporarily disconnect one from the reality of one's life and the sources of one's emotional pain.

Psychiatry will always find celebrities who swear by ECT, but the American public rarely hears about those celebrities who have cursed their ECT.  In Papa Hemingway, A.E. Hotchner recounts the sad end to Ernest Hemingway's life.  Hemingway became extremely depressed, was medicated and ultimately given ECT; but he became even more depressed and complained about the effects of the electroshock:

"Well, what is the sense of ruining my head and erasing my memory, which is my capital, and putting me out of business?"

In 1961, after a second series of ECT, Hemingway used his shotgun to commit suicide.

If you feel sorry for Hemingway, then what kind of emotional reaction do you have upon discovering that last year 203 Australian children -- including 55 age 4 and younger -- received ECT?

# RN, CC — Diane Rizun 2011-01-29 16:12
This article brought up unpleasant memories for me. I used to assist at a local psychiatric hospital for ECT (1970's), and, even with sedatives those patients were traumatized. It was also traumatizing for me as an RN. I can not imagine being with a small child receiving ECT, it is unimaginable. My own research is similar to this article. Counselling is the answer. (I am a retired RN and certified counselor)
Reply | Reply with quote | Quote

# RE: Psychiatry's 'Shock Doctrine': Are We Really Okay With Electroshocking Toddlers? — Michael Freeman 2018-05-23 12:19
Levine has written some good articles. I have his "Common Sense Rebellion" book. But I eventually drifted away from him because he makes this mistake that so many "Anti-psychiatry" and Mental Health Rights campaigners make. They drift onto the Left and even further Left than that, assuming as they do that Psychiatry is a product of Capitalism. Of course the drug company profits is an issue, but behind the entire facade is the usual Deep State, New World Order and Globalism nonsense (remove all borders, install forms of Socialism) that set Psychiatry off on it's modern path in 1945 - http://blog.michaelzfreeman.org/weaponised-psychiatry-psychiatrys-deepstate-political-agenda-exposed/ - They have taken us backwards by a 100 to 200 years before the Victorians. The Victorians named experts in mental health problems "Alienists" because they believed that the mentally ill were "alienated from their true natures". This is actually far closer to what is going on and the Victorians had it right. That eventually led to the discoveries of Freud and then Jung who found and refined the same thing - those subjected to, especially, very early childhood trauma "split" and become alienated from themselves (see the book Inner World of Trauma by Donald Kalsched). What we have here is another Trojan Horse. Psychiatry is the Gestapo arm of modern reductionism and rationalism. All superstitious and religious "nonsense" will be ECT'ed and/or drugged away. Even Freud was suspicious of Jung's interest in the "occult", Alchemy, Shamanism and world mythology/fairy tales, but he did not declare war on it! Psychiatry has declared war on the human race yet in almost every single case Anti-Psychiatry activists allow themselves (especially former victims) to be hijacked by the Left and made into part of the Victim Class. Psychiatry has an ideology and much of the problem here reminds me of what happened with ISIS terrorists post the election of Donald J Trump. ISIS was almost completely destroyed in a year. A YEAR ! This was due to the stellar work of Sebastian Gorka who clearly and incisively identified the IDEOLOGY of ISIS terrorists. This is what I'm attempting to do with Psychiatry (see link above).
Reply | Reply with quote | Quote
Refresh comments list