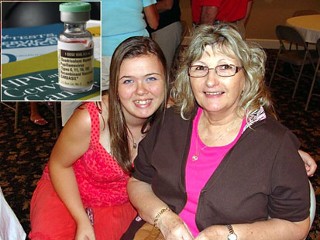 This vaccine is not mandatory for U.S. citizens, and many of the studies on this vaccine are still ongoing, meaning that people like Simone are the guinea pigs.  The real testing for vaccines is often done when they are used on the public.  It is officially unknown why Gardasil was added to the list of mandatory vaccines for immigrants.  The vaccine is completely ineffective if the person is already infected with H.P.V., and this rare form of genital warts can only be spread through sexual contact.

Anger has risen in recent years over the issue of forced vaccines for immigrants.  Civil rights advocates have requested testing for certain diseases, instead of forced medicating when nothing is known to be wrong.

When ABC first publicized this story, some of those who left comments attempted to justify this action by the I.N.S..  They stated that Simone's application for citizenship had stripped her of any right to refuse vaccinations.  These responses were likely due to misdirected anger towards the illegal immigrants of this country: a group to which Simone does not belong.  There is a vast difference between someone who is here as a foreign national (the equivalent of a guest), and one who came here illegally (the equivalent of a burglar).  With everyone else, it is too easy to ignore a group which is not their own, when an issue does not directly effect them.  Historically, certain groups of people have always been dehumanized for the purpose of testing.  Eventually, larger scale testing is inevitably conducted upon the masses.  If we can learn from history, then we will see that mandatory Gardasil vaccines are heading for American children, too.

The manufacturer of the vaccine, Merck, has just been granted approval from the F.D.A. to market this vaccine to boys, to supposedly prevent testicular cancer and genital warts.  Keep in mind that this was made and marketed as a cervical cancer vaccine.  It can be predicted that the devastating side effects which have been seen in teenage girls will now begin appearing in boys, too.  This vaccine is the most controversial that has ever been released to the public, which is why there has been a delay in making it mandatory.  The popularity of the Internet has allowed the reports of Gardasil's problems to reach more people than would have been possible in previous times.

Local churches managed to pay the $1,700 fee required for citizenship applications, but she will have to pay another $585 to appeal the decision.  It is money that Simone does not have.  It is very unlikely that she is alone in this situation, and it seems incredible that it could happen in America.

Did the one strain of genital warts (out of 40) that Gardasil supposedly prevents become such a threat to the American way of life that the Government needed to mandate the vaccine as a core national policy decision?  Do we really need to protect our virtuous American men from those venereal disease carrying hussies from abroad, or is this just another partnership between our government and the pharmaceutical industry?