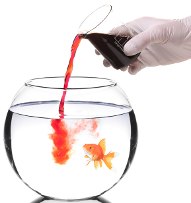 One of our strong suspicions about farmed fish was confirmed by researchers at Wake Forest Baptist University Medical Center. They proved that farm-raised fish are unhealthy, and dangerous with long-term consumption. We have to applaud Wake Forest for this. Through a press release, the university summarized its findings of:

"Farm-raised tilapia, one of the most highly consumed fish in America, has very low levels of beneficial omega-3 fatty acids and, perhaps worse, very high levels of omega-6 fatty acids...

"The researchers say the combination could be a potentially dangerous food source for some patients with heart disease, arthritis, asthma and other allergic and auto-immune diseases that are particularly vulnerable to an 'exaggerated inflammatory response'. Inflammation is known to cause damage to blood vessels, the heart, lung and joint tissues, skin, and the digestive tract.

"They say their research revealed that farm-raised tilapia, as well as farmed catfish, have several fatty acid characteristics that would generally be considered by the scientific community as detrimental. [farm-raised] 'Tilapia has higher levels of potentially detrimental long-chain omega-6 fatty acids than 80-percent-lean hamburger, doughnuts and even pork bacon', the article says.

"'For individuals who are eating fish as a method to control inflammatory diseases such as heart disease, it is clear from these numbers that tilapia is not a good choice,' the article says. 'All other nutritional content aside, the inflammatory potential of hamburger and pork bacon is lower than the average serving of farmed tilapia'"

"Tilapia is easily farmed using inexpensive [unnatural G.M.O.] corn-based feeds, which contain short chain omega-6s that the fish very efficiently convert to AA [a type of omega-6] and place in their tissues. This ability to feed the fish inexpensive foods, together with their capacity to grow under almost any condition, keeps the market price for the fish so low that it is rapidly becoming a staple in low-income diets."

That last part about the fish's capacity to grow under almost any conditions is telling. What is really being reported is that the fish will survive despite malnutrition, G.M.O. foods, pesticides, chemicals in the water, and being given massive amounts of antibiotics. The use of such pollutants is the cheapest investment for factory farmers. We must ponder what percentage of the fish are themselves genetically engineered.

This is yet another reason why we recommend flax seed oil, instead of fish oil, to supplement omega-3. Fish oils are much more likely to be tainted, toxic, and ineffective. Flax seed oil should always be purchased in capsules that protect it from heat, air, and light. It too can become dangerous if it is not handled properly.

Contrary to what is believed by the researchers at Wake Forest University, our research indicates that the ideal ratio of omega-6 to omega-3 is somewhere between 4:1 and 2:1, with omega-6 being the larger value. This ratio is impossible to obtain through a typical Western diet, which is usually 15:1 in favor of omega-6. It should therefore not be surprising that our Western societies tend to be so sickly.

Readers should be aware that the kelp, seaweed, and bladderwrack that is sold in supplement form may be from factory farms too. Unless you know the origin of such supplements, it cannot be assumed that these supplements are from the wild, or that they are in their natural form. They too could be contaminated and counter-effective, including man-made contamination from industrialized farms. We advise readers that all such supplements should be considered contaminated. There are shameless companies which promote the consumption of underwater vegetation, and they actually refer to it as "sea vegetables". Beware of these companies and the people behind them.

Why Rancid 'Healthy' Oils Are More Dangerous Than The Bad Oils