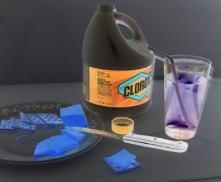 M.M.S. was an acronym for "Miracle Mineral Supplement", but it was changed to "Miracle Mineral Solution" to evade media attention and F.D.A. actions. If you are not already cringing from the marketing, you may be when you discover that it is chlorine dioxide (oxygenated chlorine). The marketing of this product is so dishonest that even its name was based upon lies. It was never a mineral nor a miracle, or even a supplement. Chlorine deficiencies do not exist in any living creature. The name change happened because the product had been well exposed as a dangerous fraud, in much the same way that a career criminal will change his name to inhibit police investigations and arrests. A similar product is called "MMS2", and it is sold by the same people.

Chlorine dioxide is the compound that is used to bleach flour, and disinfect municipal water supplies. This bleaching process is one reason why processed carbohydrates are so destructive to the human body. In addition to being nutritionally destroyed by the bleaching process, food exposure to chlorine leaves behind dioxin compounds in the food, as chlorine reactions tend to do.

Promoters of M.M.S. claim that it cures A.I.D.S., herpes, cancer, malaria, tuberculosis, and "many more diseases". Snake oils never had it so good. The M.M.S. fraud would be amusing if it weren't so dangerous. It is primarily being promoted by Jim Humble and Adam Abraham. It is not surprising that the same people who sell chlorine dioxide as a dietary supplement, also sell detox food pads. The pads, by the way, simply turn brown when any moisture is applied to them.

Consumers of M.M.S. are told to mix sodium chlorite with citric acid to produce chlorine dioxide. This is due to the fact that concentrated chlorine dioxide is explosive, and therefore illegal to ship to customers, so they must complete the finishing chemical process themselves. Customers are advised to take several drops per day, inside an acidic fruit drink. They are sometimes warned by sellers (sometimes not) that they should expect to become extremely ill soon after using it, and that their symptoms of poisoning just indicate that the "healing" has begun. Then customers are told to begin reducing the amount of drops that are used daily, until the "miracle" solution stops making them violently ill. This self-poisoning is supposed to continue perpetually for a lifetime. Its sellers claim that it kills all pathogens, parasites, diseases, and it even removes all heavy metals too!

Chlorine bleach is very effective for cleaning toilets of fungi and other undesirable pathogens, but it should never be consumed. Bleach kills pathogens by first poisoning them, and then corroding them.

"Amazing as it might seem, when used correctly, the immune system can use this killer to only attack those germs, bacteria, viruses, molds, and other microorganisms that are harmful to the body...

"If you notice diarrhea, or even vomiting that is not a bad sign... It is not real diarrhea as the body is just cleaning out, and it is not caused by bacteria or virus. When the poison is gone, the diarrhea is gone."

The mastermind behind the M.M.S. con, Jim Humble, actually tells his victims to ignore their diarrhea, since their diarrhea is not real diarrhea. Bleach compounds are poisonous to all living organisms, regardless of size or function, so M.M.S. does not just kill the harmful pathogens. Chlorine dioxide may be used on dead meats and farm equipment to sterilize them, but no farmer would ever feed it to one of his living animals. The above quotes express an extremely manipulative personality, who wishes for potential customers to think of M.M.S. as being as pure and organic as the range-fed animals on old McDonald's farm. There is no such thing as "friendly bacteria" on the surface of dead meat or the bloodied surfaces of slaughter houses, where bleaching agents such as chlorine dioxide are used.

If a solution such as chlorine dioxide did work as Humble claimed, then it would work in the same despicable manner as chemotherapy. It would poison the entire body, and hopefully kill-off the weaker (diseased) cells first; but it would also have the side-effect of damaging all healthy cells too. Chlorine is used to sterilize hospitals and slaughter houses because it is so effectively toxic. The very term sterilization means to kill everything, which is something the fraudsters are apparently unaware of, as is shown by their claims. The same is true for water chlorination. If chlorine dioxide were effective as a medicine, then tap water would be ideal for our health, along with bleached white flour, white sugar, and bleached white rice, but those who most consume these bleached carbohydrates are the unhealthiest in society. The one common thread amongst the unhealthy carbohydrates is bleaching with chlorine. The chlorination of water in the United States, in the early twentieth century, happened at the beginning of the heart disease and cancer epidemics. It is no coincidence.

This product (M.M.S.) is particularly dangerous, because those who sell it are encouraging people to ignore the symptoms of poisoning. Vomiting and diarrhea are clear indications that the body is being made unwell, and that something really bad is making it violently ill -- not healthier.

The Health Effects of Chlorine on the Body

The U.S. Environmental Protection Agency website explains that chlorine dioxide reduces activity in laboratory rats, and produces neurological disorders. However, there have been very few studies on the effects of orally-consumed chlorine dioxide, because governmental agencies do not expect for people to be drinking a chlorine bleach as a supplement.

Chlorine has been known for years to both cause and worsen respiratory problems, including asthma and pneumonia. As a thyroid-crippling halogen, chlorine damages enzymes across the board to decimate the immune system upon ingestion or inhalation. Chlorine causes magnesium deficiencies, which can cause almost any symptom imaginable, including migraine headaches, high blood pressure, chemical sensitivity, and in severe cases: sudden death, according to Mark J. Eisenberg, M.D. When such magnesium deficiencies are combined with MSG intake, it sometimes leads to sudden and unexpected heart failure; even amongst young people. Chlorine also decreases the absorption of calcium and phosphorus while increasing their excretion. This loss of calcium into the urine leads to bone-related problems including osteoporosis. Chlorine has been known to irritate the skin, the eyes, and the respiratory system. It has a tendency to react with other chemicals (especially acids) to produce even more toxic byproducts. Some of chlorine's byproducts are known as trihalomethanes (THM's) and they are typically found in municipal water. An example of a THM is chloroform, a documented cancer-causing agent. Studies have repeatedly demonstrated that chlorine and THM's are leading causes of colon and bladder cancers, as well as diabetes, kidney stones, and sudden heart attacks.

Chlorine-tainted water changes the preferred HDL cholesterol into LDL cholesterol, creates free radicals inside the body that require more anti-oxidant vitamins to neutralize, and it destroys fatty acids that are needed by the heart. According to the book, Coronaries Cholesterol Chlorine by Dr. Joseph M. Price, chlorination was first suspected of causing heart disease during the Korean War, because the men who had canteens with the highest amounts of chlorine also had the greatest damage to their arteries. Physically fit soldiers in their twenties had arteries reminiscent of their seventy-year-old grandfathers.

The Debate between The Health Wyze Report and Jim Humble about whether M.M.S. is a Fraud