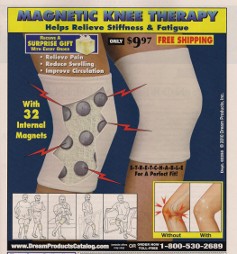 Magnets are becoming popularized as a method for treating swelling and joint issues, with magnetic therapy growing to a billion dollar business internationally. This is due to massive marketing schemes. Magnet therapy advertisements plagued the June issue of Carolina Country, a free magazine that is distributed by the utility company, Energy United. The magnets were embedded into clothing, which allegedly relieves stiffness and fatigue. The product was essentially thick spandex underwear with embedded magnets. The manufacturer sells a large line of magnet-based "therapies", and they hook their victims using products like the one described. That particular entry-level product was one of the cheaper ones ($9.97) that was merely designed to reel-in gullible people for future marketing.

Here is how the scam works. Customers are beguiled by the fact that the magnets will appear to help, due to the tight and warm spandex wrapping; not the magnets. Attaching a tight spandex bandaging to a swelled area will concentrate healing warmth, and its pressure will help to reduce swelling. This has absolutely nothing to do with magnets, and any sports coach can easily explain it.

It is important to note that the real agenda behind this particular product is simply to introduce the victims to believable "magnet therapy", so that they will eventually be purchasing magnetic bed covers too (above $100), magnetic jewelry, and even magnetic slippers. After all, a tight and warm bandage that helps to relieve a sore knee is obviously indisputable proof that magnetic fields are beneficial to human health. At least, it is the bogus connection that we are supposed to make.

Vendors take advantage of the fact that most people have no idea how magnets work. Thus, they can make claims which have no basis in reality. Here is an example from one of the magnet marketing web sites:

"Magnetic fields attract calcium ions in the blood, which then press against blood-vessel walls for a dilating effect that optimizes circulation. This improves oxygenation of injured tissue to promote healing."

Magnets have no effect on calcium whatsoever, nor calcium ions. Magnets attract only iron and iron containing compounds. They have an attraction to many of the commonly used steels and metals because the metals contain iron. The con men know that mesmerizing terminology like "calcium ions" sells products.

The truth is that studies have repeatedly shown that magnet therapy has no greater benefit than a placebo. That's not to say that the placebo effect isn't a powerful one, but it does mean that a lot of people are wasting massive amounts of money, and funding companies who fraudulently seek to profit from their continued suffering. The warmth generated by the aforementioned product will help to enhance the placebo effect, because the victim believes that he can actually feel it working via the bandage warmth and pressure. Such victims are then likely to become life-long purchasers of these products.

Copper bracelets with magnets have also become popular. They are alleged to assist with joint pains and arthritis, because they contain copper. While copper has been proven to help with these things, it is impossible for enough copper to absorb transdermally from a solid metal object to make any difference.

Another Fraud Of Alternative Medicine: M.M.S.

# Dev Pero 2014-02-20 18:43
I do not want to provoke argument wrt this subject but I feel that there is a discrepancy in logic laid out here.
Firstly, all chemical reactions are of an electromagnetic nature.
All elements react to magnetic fields however slight and minute.
According to geologists the earths molten core is of iron and that logically indicates that gravity does indeed in part have a magnetic influence over all matter.
We exist in the electromagnetic spectrum.
Our brains send out electromagnetic signals.
We are influenced very readily by electromagnetic frequencies as is our health. Microwaves are detrimental and MRIs though they use tracers to aid viewing, they can be viewed without the aid of chemical tracers added to the system.
And while I am not an advocate of the use of magnets for health purposes I know several vets who do use magnetic boots on horses who testify that they do speed recovery from injury and from arthritis, not that other treatments dont help too.
Plants respond well to sunlight as does all life. and other wavelengths & frequencies of the electromagnetic spectrum.
Magnetic fields just represent a very small portion of the spectrum or if we consider gravity, possibly a very large part of the spectrum
Chemical reactions can also be affected by the influence of magnetic fields.
http://pac.iupac.org/publications/pac/pdf/2009/pdf/8101x0019.pdf
http://www.uottawa.ca/publications/interscientia/inter.1/magnetic.html

As I mentioned, I am not trying to cause argument but I do feel that you are dismissing what appears to be an age old therapy that has been used for thousands of years by those who's experience tells them it does work.

I am on the fence so to speak on this subject myself but I cannot flippantly dismiss a subject without looking into it in more detail and consideration.

I happened across a series of videos on youtube on a subject called primer fields (parts 1-3) a while back. I am certain that you might find them of interest
and I include the link to the first here:
http://www.youtube.com/watch?v=Vw3A6yf-fFA