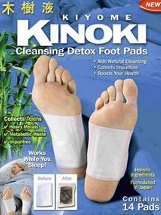 Victims of the con are told to stick the pads onto the soles their feet at night, and then the pads will almost magically pull toxins out of their soles, alongside removing candida (gastrointestinal yeast), mucous and parasites. The pads become brown in most cases, which is claimed to be from the absorption of toxins. However, the pads turn brown even when in contact with 100% distilled water, as shown in this Youtube video. This is an indication that the darkening is due to moisture from the feet. Some commercials have presented that the pads lighten in color every night, which supposedly proves that they are lessening the amount of toxins in the blood stream. However, most users of the foot pads report no change in color from one night to the next. Their feet sweat about the same amount of salt water every night, in other words. The fact that there is a small portion of people who do actually get a reduction in color is a concern. For them, the pads are releasing a water soluble chemical that is absorbed into their skin, and it is toxic enough to impair the sweat glands. From what we know about anti-perspirants, this means that the pads are releasing aluminum. Something very toxic is being put into their bodies, instead of being removed. The F.D.A. silently blesses this sort of 'alternative medicine', because their petrochemical industry partners could not ask for better malignment of their competition.

We searched for the ingredients list for the foot pads, but we could only find partial lists. Whenever some ingredients are listed, the product's marketers tend to boast about the presence of tourmaline. Tourmaline is a boron silicate compound that always contains impurities, such as aluminum, iron, sodium, lithium and potassium. Boron, by the way, tends to be especially toxic and inflammatory to the body.

Here is typical advertising from an Amazon.com seller of these pads:

"Utilizing only the highest purity of ingredients and the optimum blending ratios for maximum results - the Detox Foot Patch provides the one-two punch of the powerful detoxifying ingredients, in conjunction with tourmaline (the negative ion & far infrared producing mineral) to provide an unparalleled and effective external cleansing experience."

We can read above that it creates "negative ions" and generates "far infrared" energy. The secret ingredient is obviously kryptonite. If these pads were really producing far infrared, then that type of energy is more appropriately called "microwave radiation". Even if these claims could be true, in some kryptonian parallel universe, do any of us really want our feet microwaved -- for the sake of health? What toxins does microwave radiation to the feet really cleanse? Radiation exposure produces benzene compounds in the blood, like those which are always found inside microwaved meats.

The pads often contain mushrooms too, as if victims were not already getting enough heavy metals from the tourmaline. The mushrooms' metals will leach into the skin, but the mushrooms' usual natural antidote, selenium, is unlikely to be transdermally absorbed in enough quantity to help, as it normally does in foods. We can expect the usual result to be an amplification of heavy metal toxicity, and likely stimulated candida too. Fraudsters claim that the pads remove toxins from the body, but in actuality, they increase exposure to heavy metals and various chemicals. Most of the original Internet sales sites have disappeared, but the Internet is still riddled with foot pad cleanse products and smaller sellers. The imitations of the original Kinoki pads contain the same disturbing ingredients, and all of them have dishonest claims.

The special ionic foot bath devices generally cost in excess of $1,000 (U.S.), and they are said to remove not only toxins from the body, but also candida, mucous, lung congestion and joint pains. These devices consist of a basic D.C. power supply, wire, iron rods, and a plastic water container. Two 9-volt batteries and a piece of wire would do the same thing, so the manufacturers expend great efforts to make these devices look high-tech and medical enough to command a high price. Sessions with these "medical" devices are available at some health food stores and chiropractic offices. If you are being helped by people who offer this service, then we recommend locating a more ethical practitioner.

In most cases, about a cup of salt is added to the water. Next, the victim is told to place his bare feet into the water just before the device is turned on. It starts with bubbling, and a hazy material appears (which is explained to be "candida"). Over a period of about an hour, the water turns brown. To someone with no knowledge of electronics or chemistry, this carnival-like charade can seem very impressive. Victims are made to believe that toxins have been cleansed from their bodies, and they will often feel better due to the powerful faith effect. However, whenever the water from these sessions is actually tested, the only thing inside it is iron rust, or some other metal in colloidal/hydroxide form. It happens regardless of whether a person's feet are placed inside the tub. The same thing happens when the feet are not submerged in the water.

The water becomes brown due to electrolysis (like electroplating). Electricity runs through the water, and it is in contact with the conducting metal probes. This causes the probe metals to combine with the water; turning it dark and hazy. Even in cases where salt is not added, there is salt on the skin and other naturally-occurring minerals that are released into the water, which makes the water conductive enough for this effect to be produced. The same result can be reliably obtained from a water container, two metal rods, salt, water, and a D.C. power supply. No feet are required.

Not only are no toxins or candida removed through the feet with these products, but these products actually increase the amount of foreign metals inside the body, due to skin absorption. These devices expose victims to large amounts of inorganic iron, and excessive iron is largely responsible for the high rates of heart disease in men. The iron that women and children need is much better obtained from dietary sources than ionic foot baths, and many people cannot properly use iron from inorganic sources. The inorganic iron that saturates the water is generally more harmful to the human body than good.

The toxins of the human body rarely reside inside the feet, and they do not gravitationally fall whenever people stand up. Instead, toxins are stored inside fatty tissues and inside the liver. In order to cleanse the body, a legitimate heavy metal and liver cleanse needs to be done.

Eliminating The Parasites That You Almost Certainly Have, and Curing Lupus

Techniques For Cleansing The Body and Detoxifying

Another Fraud Of Alternative Medicine: M.M.S.

# ionic foot bath — glenda guilott 2011-03-13 16:39
you are mistaken about the foot bath. ihave been doing them for four years, and have seen very good results. especially for cancer patients.
my DR.,
so before you make such a claim karen dantin does them for her patients.
she also with treats patients, with vit, minerals, and herbs.
so before you make such a claim you should try them for yourself.
i believe your report on cancer, but not the foot bath.
if i can't help anyone, i certainly won't hurt them.that's not in my heart.
i know from experience the foot bath helps.
thank you .
glenda guilott
23357-b
denham springs, la.
Reply | Reply with quote | Quote

# Thomas Corriher (Editor-in-Chief) 2011-03-13 16:47
Actually, the heavy metal toxicity that is almost certainly caused by these devices is one of the worst, most irresponsible, and flat-out evil things that a person could inflict upon a cancer patient. Why not use your microwave to give them some "radiation therapy" while you're at it? It would be bad enough if you were merely neglecting these people to let their cancers progress, but you are moreover making money by making their conditions worse, and that's just disgusting.

Your web site was censored from your post, because we will neither promote you, nor be associated with you. Your type is the reason why we'll never be able to shut-down the FDA, and I hope they nail you.

Please leave, and do not return. Your kind is unwelcome here.
Reply | Reply with quote | Quote

# RE: Quackery: Foot Cleanses, Detox Foot Pads, and Ionic Foot Baths — Rocco St.Bruno 2017-11-07 01:30
Thank God for Kinoki Foot Pads, I have been concerned about the toxic build up in my body ever since aliens abducted me six years ago. These little miracle pads took care of all the interplanetary toxins, not to mention the alien viruses I was exposed to. My advise to you is to buy a years supply and use them every day, one on each foot and one on your forehead. As an added bonus, the little aluminum foil wrapper the pads come in makes a great hat, shielding your brain from the cosmic rays sent by alien forces in an attempt to program all of humankind for self-annihilation. So do it today, after all the giant frog commands it.
Reply | Reply with quote | Quote
Refresh comments list