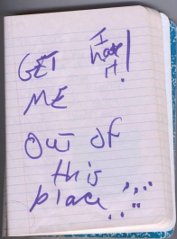 The distressed adolescent often has feelings of abandonment, emotional detachment, withdrawal, and isolation.  These children begin to develop an intense anger directed towards the adult society that they feel has hurt them and does not understand them.  Parents need to learn how to build relationships with these children, and this can be accomplished through a process of emotional coaching, of allowing the child to express their feelings without judgment, while providing clear guidance, limits, and expectations.  It is often inconsistency and a lack of clear guidance from parents that furthers the struggles for these children, who then begin to seek guidance from misinformed peers.

These children need love, affection, and a non-judgmental atmosphere.  If this need for love does not come from meaningful and sustainable adult relationships, then it will take on a new and contorted character; where the concept of 'love' comes from trying to be accepted by peers (even if they are negative ones).  Children will seek a source of non-judgmental relationships, and to be 'liked', even if it causes their eventual self-destruction.  Affection that is not provided by responsible adults is too often replaced by irresponsible sexual activity where teens not only seek for pleasure in a world that often provides only hurt, but feel once again that through sex, they can find a sense of acceptance and a supposed emotional connection.

Some teens feel so hurt and betrayed by the adults in their lives, and the chaotic environments in which they dwell, that they turn to 'radical rebellion'.  This can be seen in those children who are 'cutters', as well as those into such social movements as punk and goth.  With cutters, the emotional pain and trauma they have experienced is so intense, that their mental anguish manifests itself physically through the act of cutting.  For the goth teen, who dwells in a world of emotional darkness and frequent experiences of despair, once again, this mental anguish displays itself in physical signs through the wearing of dark clothing, dark objects, body piercings and a fascination with things associated with death.  There are also those teens who involve themselves in gangs as they are seeking a sense of connection with a 'family'; even though this 'family' may cause them to engage in dangerous behaviors.  Their desire for a connection with someone who they feel will accept them outweighs any sense of danger or risk.

Teens are seeking autonomy, but they must be taught by responsible adults that this autonomy also comes with responsibility.  Many distressed teens feel that they are controlled and are criticized.  These feelings are to be expected, because it has become rare for teens to have their positives and strengths accentuated.  Most often teachers, parents, and others focus on the negatives.  The members of our young generation are frequently driven to despair and have no motivation or drive to change themselves because they have been taught by their adult role models an attitude of 'why bother', and given an overall feeling of being worthless.

Parents and others must stop looking at their children as just a 'problem', stop searching through various means for some 'hidden problem', and stop casting the blame for their own problems onto others.  If the parent can be honest and introspective, no matter how difficult and even painful that may be, they will find that there are ways for them to help alleviate the suffering of their children, and they may even uncover that they contributed to it.  This does not mean that parents must wallow in guilt, but rather recognize the things that must change for the teen to have a more harmonious relationship with the family.

Dr. Dan L. Edmunds, Ed.D., is a noted psychotherapist utilizing drug-free relational approaches, and he is the founder of The International Center for Humane Psychiatry, an emancipatory movement for human rights in the mental health system.  He can be reached by e-mailing: doctoredmunds@drdanedmunds.com. The International Center for Humane Psychiatry website is psyche.healthwyze.org

How Long Will You Obey?