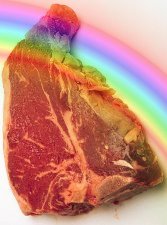 The many benefits of eating meat are negated when its nutritional value has been corrupted by the chemical industry. Contrary to what is being widely taught, natural beef is not unhealthy, nor is it full of fat. However, when cows are factory-farmed in concrete sheds, in the most repulsive conditions, and they are barely kept alive with pharmaceuticals; then the resultant meat is fatty and unhealthy.

The fat content of beef sold in regular U.S. retailers is 4 to 5 times higher than beef that was sold during the 1950's. It was common for U.S. beef in the 1950's to have as little as 2% fat, but now the fat content is so high in factory-farmed beef that the U.S.D.A. allows ground beef to be up to 30% fat and 15% pink sludge (described later). That means that ground beef in the U.S. is sometimes only 55% real meat.

Factory-farmed beef in the United States is sometimes one-third fat, which is 15 times worse than the historical ratio. Our contemporaries would not have been able to honestly call it meat, because most beef now is a chemically-enhanced fat delivery system. The situation is made worse when the meat is later soaked in toxic solutions, such as nitrate salts, prior to arrival at grocery stores. The purpose of this is to increase shelf life by making the meats so toxic that fungi and bacteria immediately die from contact with it. Thus, the meat is toxic by design.

The Next Generation of Food Preservatives

There is a new generation of chemicals being employed that are intended to deceive us about the quality of meats, instead of merely increasing their shelf life. These new chemicals are engineered to stop meats from changing colors when they rot, so that customers will not know. This disturbing trend has actually become normal with U.S. meat distributors, and all beef sold in regular retailers should be assumed to have these color stabilizing chemicals. An example of these chemicals is propyl gallate, which causes tumors in laboratory test animals. It was never adequately studied before it was embraced by the U.S.D.A., but it is believed to cause liver damage, kidney damage, and be a carcinogen.

Have you ever shopped in the meat section and noticed that the meat had a rainbow appearance when viewed at certain angles to the lights? This is dismissed by most shoppers, but it is a clear sign that the product is chemically coated. Real meat does not produce rainbows. If you look closely at the packaging of meat at regular retailers, you may notice text that reads something like, "Enhanced with up to 8% marinade". It is always printed tiny in the hope that it goes unnoticed. That so-called "marinade" is not usually a marinade at all, because the F.D.A. allows companies to hide ingredients with a label claiming that they are a marinade, including toxic chemicals like propyl gallate. The word game exists to protect the industrial food and chemical industries, who have financial reasons for not disclosing the real ingredients.

Beware of the word "enhanced", and be cautious of the word "enriched". Mentally substitute the phrase "chemically engineered". These words are frequently used to hide things that none of us would willingly consume.

Processed meats are notorious for having sodium nitrate, a known carcinogen. However, most people assume that fresh meats are completely untouched by the chemical industry. Often this is not the case. Most retail meats are gathered from farms that are separated by vast distances, which typically makes the chemical poisoning of meat a business necessity for the largest food corporations.

Our research shows that some manufacturers coat their meats with hydrolyzed gelatin. This is made from de-haired pig skins that were dissolved in industrial acids. As disgusting and unhealthy as this may be, a more troubling fact is that these coatings are sometimes made from an undisclosed group of chemicals. Again, no labeling whatsoever is required, nor is there any public disclosure. 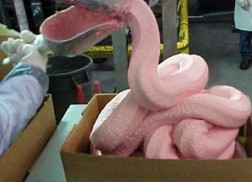 Ammonium hydroxide is being used to sterilize beef that would not normally be considered safe for human contact or consumption. The byproducts of meat processing (waste materials) are put through a high-speed centrifuge, then soaked in an ammonium hydroxide solution, and finally it is ground into a gooey paste. This process produces a pink material that has a slimy texture. The next phase of its processing is mixing it with real ground beef to create the illusion that it is real meat. Following public pressure, McDonald's restaurants stopped using the disgusting pink slime inside of their burger patties, but the residual ammonia and other incriminating impurities are still being found in retail ground beef. Various groups in the meat industry, including Beef Products Inc., refer to this pink slime by its marketing name, "lean finely textured beef". There is very little real beef in this meat-like product, and independent parties generally consider it to be unfit for human consumption. Neither the F.D.A. nor the U.S.D.A. require any labeling whenever this artificial beef product is sold as "ground beef" in U.S. retailers. Approximately, 70% of the ground beef sold in the United States contains this disgusting and substandard beef product, according to an investigation by A.B.C. News.

On February 11th, 2013, Russia banned meat imports from the United States, because so much of the U.S. beef, turkey, and pork contains ractopamine. Ractopamine is a dieting chemical that is added to animal feed to make the animals leaner. This chemical can later be detected inside meat products. To place the dangers of this chemical into perspective: the National Institutes of Health warn that after direct human ingestion of ractopamine has occurred, emergency medical personnel should first attempt to control the victim's seizures before implementing life support procedures.

The pervasive use of ractopamine exposes another serious problem in the food chain. Namely, that if factory-farmed animals were given exercise, and if they were not constantly being given toxic foods, synthetic growth hormones, genetically-engineered corn, antibiotics, vaccines, and other chemicals that are even worse than ractopamine, then there would not be a fat problem for the ractopamine to eliminate. The policies express the foolishness of using chemicals to compensate for the fact that too many toxic chemicals are already being used. Ractopamine exposure is known to produce cardiovascular abnormalities in humans and hyperactivity. China and the European Union have banned it, due to concerns about its serious health consequences. It is worth a second mention to emphasize that ractopamine is a substance that even China banned. As expected, the United Nation's Codex Alimentarius Commission promotes ractopamine, and it gratuitously states that ractopamine has "no impact on human health".

More than ever, we strongly recommend that people only purchase organic meats. Perhaps there will be a time when foods are properly labeled, so that people will be able to make informed choices. Until then, people should only buy range-fed, organic meats. We also recommend that people have their beef well-cooked. The extra cooking will melt away excess fat and it ensures that all parasites are dead. Furthermore, high heat will destroy some chemical impurities too.