A reader from Valley Wide Health Systems in Colorado was outraged by an article that we wrote about the dangers of fluoride, and subsequently sent us a link to a Centers for Disease Control web page cataloging "the ten best health achievements of the 20th Century".  This 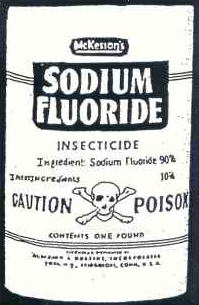 person, of course, used a false name to hide.

Reading through that C.D.C. list actually became comedic for us, so we're going to share some key points, and explain how the C.D.C. is so very wrong on so many levels.  We feel pity for whoever was asked to write the list, because there have been very few accomplishments in the last 100 years in the area of medicine, despite the propaganda and hype.  Aside from the germ theory, and subsequent improvements in hygiene, medicine has not really achieved much at all.  We are thankful for the discovery of vitamin C by Hungarian researcher Albert Szent-Györgyi in 1934, and the discovery of the cause of cancer (ie. cellular oxygen starvation) by Dr. Otto Warburg in 1931.  However, both people were vilified by the establishment, because they were responsible for information that endangered its lucrative business.  They were noticeably absent from the C.D.C.'s list, and one would assume that curing cancer might actually make that list.  Before continuing, we should mention that we have chosen not to comment on non-medical related items on the list, such as automobile safety.  With that said, here we go!

"Vaccination - "...has resulted in the eradication of smallpox; elimination of poliomyelitis in the Americas; and control of measles, rubella, tetanus, diphtheria, Haemophilus influenzae type b, and other infectious diseases in the United States and other parts of the world."

Most notably, vaccination has resulted in an epidemic of autism, striking one in every ninety-one children.  Vaccines are always conveniently released around the time that epidemics are already in their natural decline, so that modern medicine can take credit for eradicating the epidemics.  It always happens that way.  See the chart (below) for examples of this phenomena.  In almost every case, countries that did not have vaccines recovered faster than those that did.

Source: "The Questionable Contribution of Medical Measures to the Decline of Mortality in the United States in the Twentieth Century" by John B. McKinlay; Sonja M. McKinlay, 1977.

Vaccines have led to the explosion of allergies, including latex, peanuts, milk/lactose, eggs, and gluten.  Vaccines contain all of these items, and they induce an abnormal sensitivity to otherwise harmless and healthy items.  Heavy metal toxicity is also a leading cause of dementia, cancer, Alzheimer's Disease, Parkinson's Disease and chiari malformations, just to name a few.  Vaccinations have left a horrendous trail of disease and suffering behind it.  None of them were given the usual safety testing, and none of them were verified to be effective by independent 3rd parties in double blind studies.  In fact, there is actually no scientific evidence that vaccines are effective, and they have been known to cause the very diseases they purportedly stop, in patients who had no other exposure to the diseases.  If any of this is hard to swallow, then try to find those studies, or better yet, ask why vaccine manufacturers in the United States are given complete congressional immunity from all legal actions against them, regardless of what their vaccines do to patients.  In some cases, it is permanent paralysis, or death.  Most doctors don't mention the risk of paralysis, or how more than half of doctors refuse routine vaccines for themselves and their own families due to "safety concerns to skepticism over vaccine effectiveness".  Getting a vaccine makes one's chances greater of getting the disease than if he had no vaccine.  For instance, practically every polio case in the United States happens shortly after polio vaccination.

Be advised that heart disease is still the number one killer of Americans. That's #1, which apparently is somehow contorted into a victory by the C.D.C..  In 2005, 652,000 people died from heart disease, and an additional 144,000 died from stroke. This, of course, flatly ignores the number of people who were killed by the treatments, which is astonishingly high too.

Modern statin, cancer and diabetic drugs cause heart problems, and very little headway is being made in reducing the number of heart-related deaths.  Instead, the condition is blamed upon "obesity", in their typical and irresponsible blame-the-victim mentality.

This is one of the most ludicrous points put forth by the C.D.C..  Synthetic vitamins have done very little to halt nutritional deficiencies.  If people really were getting the nutrition that they need, then we would not be experiencing that "obesity epidemic", or the diabetes epidemic, and all major diseases would be less common.  It is true that iodine deficiencies were eliminated by the addition of iodide to table salt, but it would never have been necessary if all of the salt's minerals had not been stripped out by processing in the first place.  Natural sea salt contains naturally occurring iodine, and vital trace minerals.  By the way, the minerals in sea salt usually lower blood pressure, unlike the "improved" table salt that they are so glib about.  So much for progress.

Almost every American is deficient of nutrients, including those getting the Recommended Daily Allowance (R.D.A.), as put forth by the United States Department of Agriculture.  The R.D.A. recommends such minute amounts of vitamins that it is a wonder that more visible signs of scurvy are not present in our society.  With that said, Linus Pauling and Dr. Matthias Rath named Coronary Artery Disease "a pre-scurvy condition" due to its direct relationship with vitamin C deficiency.  In just another example, depression is often eliminated through niacin (vitamin B3) supplementation alone.

American maternal care leaves much to be desired.  It has the highest maternal mortality rate in the civilized world, which is something that the C.D.C. should be ashamed of.  Instead, it appears to gloat about the dismal figures.  America has the second highest infant death rate (behind Latvia).  Pregnancy is treated like an emergency disease condition, and midwifery is illegal in some states.  Comparatively, the safest countries for birthing are flooded with midwives, with them attending almost every birth.  The overall statistical pattern is that the further that mothers stay from hospitals, the safer it is for their children.

In the U.S., midwives were once demonized with smear campaigns by the mainstream medical establishment.  Advertisements depicted midwives as the unclean harlots of the lower class.  The result has been catastrophic.  One in every three births are now C-sections, and the mother and child are in more danger than ever.

When they say "family planning", what they actually mean is family prevention.  In a similar notion to the past point, birthing and the family unit are considered preventable diseases.  To list family prevention as one of the top health accomplishments of the 20th Century is nauseating.  This is accentuated by the emphasis on the roles of women.  The social and economic roles of women are unrelated to health, but the feminist ideology is well ingrained into this document.  The changing roles of women has actually led to decreased time with children, and the devastation of the family unit.  This has a negative impact on the psychological health of children; particularly at young ages.  Smaller family size is not a health benefit, or indeed a benefit at all, except to those who subscribe to the death-cult hysteria surrounding overpopulation.

Fluoridation of drinking water - "Fluoridation safely and inexpensively benefits both children and adults by effectively preventing tooth decay, regardless of socioeconomic status or access to care."

There has never been a study or any other credible evidence showing that drinking fluoride reduces the risk of cavities.  In fact, our own research of governmental records has actually shown an inverse relationship.  This means that communities with fluoridated water generally have higher rates of cavities than communities without fluoridation.

The very same fluoride that is used in the public water would require an emergency E.P.A. clean up team (replete with space suits) if any amount of it were to be spilled in transit to a water facility, and it is officially classified as an "industrial toxic waste" product.

Fluoride is the only chemical that is added to the water supply to forcibly medicate.  The specific needs of individuals are ignored, and the C.D.C. seems to relish this.  The same concentration of fluoride is present in all drinking water, so people are medicated in the same manner regardless of age, heredity, or health conditions.  Poorer people are victimized most, because they have no method of avoiding the forced "medicine" in the water supply.

The Fluoride Action Network collects statistics and studies relating to the massive health implications of fluoride.  Their health effects database catalogs cases of fluorosis across the United States.  Fluorosis is a condition categorized by pitting and yellowing of the teeth due to fluoride ingestion.  Fluoride accumulates in the bones and kidneys, causing osteoporosis ("brittle bone disease").  Its cumulative effects make it hard for studies to make definitive conclusions, because 50-year study participants are hard to find and follow.  The inclusion of fluoride in the majority of water supplies in the United States makes double-blind trials near impossible.

We strongly recommend that all of our readers watch The Fluoride Deception, which is shown below.

There is a reason why the American Indians did not suffer from lung cancer, despite their constant use of tobacco at stronger dosages than modern cigarettes.  Tobacco itself is not usually responsible for disease.  Literally hundreds of toxic chemicals are added to tobacco products, some of which are designed to make them "safer", whilst compromising our health.  The new so-called "Fire Safe Cigarettes" force smokers to inhale carpet glue fumes, and the subsequent cancers will still be attributed to the tobacco, instead of the murderous petrochemical industry.

The mainstream media only began attacking the tobacco industry heavily when tobacco advertising was banned.  The same racket exists today with the pharmaceutical corporations.  No major media outlet is willing to turn on its best paying sponsors.

In modern society, there are far bigger causative factors for cancer than tobacco, but they are not highlighted because of vested financial interests.  In other words, the health of citizens comes second to the well-hidden agenda.  In the case of the Centers for Disease Control, it is truly sad that they would highlight tobacco vilification among their top 10 achievements, but it becomes understandable when we contemplate just how few real accomplishments modern medicine has made in the past 100 years.

Fire Safe Cigarettes and the Genocide Against Smokers